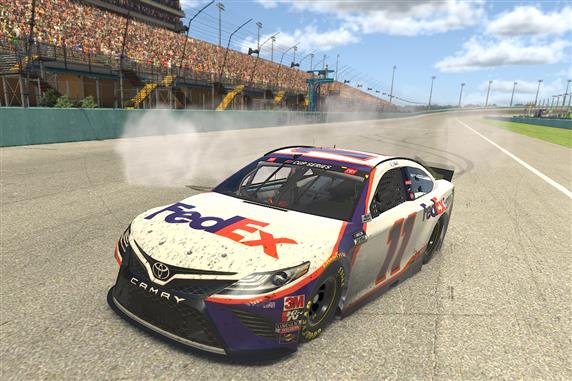 With NASCAR currently paused due to the coronavirus outbreak, almost everything going on with the sport is unprecedented. That includes Sunday’s inaugural race in the eNASCAR iRacing Pro Invitational Series, won in thrilling fashion by Denny Hamlin as he slipped by Dale Earnhardt Jr. to claim the checkered flag.

By all accounts, it was well worth doing, with the race broadcast by FS1 and plenty of chatter about it on Twitter, where it was briefly the top trending topic. But in this brave new (temporary) world of real life drivers competing in virtual races, what defines success?

According to Hamlin, if it gets new eyeballs on stock car racing, it’s worth it.

“If we got five new fans that were just sitting at home watching TV today that thought it was exciting and are willing to tune in next week or willing to tune in to a NASCAR race — or go to a NASCAR race — because they got introduced to racing today by iRacing, it’s a success,” Hamlin said in a post-race conference call. “If you make positive gains in your audience, whether it be one person or 1,000, it’s a good thing.”

The Joe Gibbs Racing star also pointed out another benefit of the iRacing exhibition, which is that it gave drivers who don’t have the benefit of top notch real world equipment more time in the limelight. That includes the likes of Timmy Hill and Garrett Smithley, who both earned top-five finishes in the Dixie Vodka 150, ahead of Cup Series champions like Kyle Busch, Joey Logano and Jimmie Johnson.

“I certainly think it’s good,” Hamlin said. “Guys with experience [in iRacing] are going to shine, especially early on in this type of racing.

“I think it’s great for those guys who normally you would not see up front. … It’s great that those guys were able to participate, and not only participate but challenge for the win. On a normal week, they’re thinking, ‘Well, how can I run 30th,’ right? It’s just a different beast.”

Of course, any momentum to be gained for NASCAR or its drivers will fade if the Pro Invitational Series turns out to be a one-shot deal. A lot of eyes in the sport will be watching to see if the Cup Series stars will want to give it another go — Hamlin thinks they will, though also predicts that not all the names will be the same from week to week — and if FOX wants to keep showing the races to replace the real world action they lack on Sundays.

For now, Hamlin is anxious to go back and review “all of it” to see how the race looked to fans watching at home. He’s already reviewed the thrilling final laps and believes they looked real enough to hook people for as long as real NASCAR races are on hold.

“It certainly keeps our sport relevant if we can keep it going,” he said. “As long as you have drivers willing to participate, you’re going to have a product that people are going to want to see. If you get that first step, then most likely you can keep this thing going.”

I thought this was fantastic. I’m 41 years old and certainly not a “tech-savy” kind of guy but with everything going on, it was really cool to be part of this experience. Did it compare to the real thing? No, certainly not. But it was humanistic and uplifting to see everyone having a good time, FS1 calling it like it was a real race, and to see some very generous donations come out of the event. I think everyone should embrace the concept of adapting while this virus runs its course and try to engage socially in anyway possible. It certainly beats trying to ration why the dang toilet paper keeps getting bought up. Kudos to all involved today and thank you!

Bill B
Reply to  Misterslideways

Yeah well the real treat was on Fox a bit later in the afternoon. They showed a race at Richmond from 1986. Seeing how I wouldn’t start following NASCAR for another decade, I was watching it for the first time. I can’t believe they actually showed us a race from the distant past. I will watch any race they put on that has a 19?? date. If they cherry pick great/notable races with a 20?? date I will watch them as well. I can’t believe they actually showed a classic race on national TV.

BTW, I did at least check out the iRacing on FOXSports1. I watched 10 minutes and can say it is definitely not for me. It was exactly what I expected, watching people play video games.
hip, hip HOORAY!!!

You got into NASCAR the same time I did ? 1995 was my first race I watch. I remember getting that box of corn flakes that had a Terry Labonte stock car inside. Watched a race that same weekend and have been a fan since. Speed use to replay older races a-lot in the early 2000’s, wish we still had a station available to us race fans like that.

The finish yesterday was pretty intense, but the first half the race was just a wreck fest.

It was entertaining. The wrecking got to be a bit too much but seeing them wreck like that made me feel better about my driving in these simulators. It is tough as you have no feel, it is all in the wheel. Like Jeff was saying, usually you get the feel of a car beside you as it changes the air and you dont have that in sim racing. I did order a wheel last night with a 4y warranty since my last one broke.

While this was entertaining, I am not sure this is sustainable. It was something different, but once all the drivers get the hang of it, it may lose some of the excitement. Although I am not sure these drivers will all ever get the hang of it, it really is a different type of racing and can be extremely frustrating at times. Kyle Busch was me yesterday, just kept getting caught up in everyone else mess

Nope that was just totally weird and creepy to me. My whole household was in agreement. Yuck! Watched 5 minutes and that was enough…

It was a distraction for a couple hourse, but will NEVER replace a real race with real cars on a real track. The only benefit I see from this was the news that they have gone to North Wilkesboro to add one of Nascar’s iconic tracks to their product. Pretty sad when we are limited to seeing unique tracks on a computer screen.

The best part about this was it was the #1 trending topic on Twitter…that has to be a lot of people talking about that. I personally don’t have a twitter but can view tweets. Anytime NASCAR is top 5 talked about, that can only be a good thing. I think the sport walked away with some new fans yesterday. Will the be sustained once the real cars hit the track? Who knows, but this was def a positive for NASCAR imo.

If Nascar hadn’t screwed the old fans who brought their kids and grand-kids, you wouldn’t need new fans

The preference for classic races instead of sim racing is understood, because those are enjoyable even when the outcome is already known. The disdain for the broadcast of sim racing is harder to understand. The first NASCAR sim racing game by Papyrus was what made my son a devoted fan of the real thing for the next 20 years. He would have loved the opportunity to see his favorites race on the same virtual tracks that he did. I do think it would be great if they ran on tracks the NASCAR teams don’t or can’t.

So realistic, just like real NASCAR racing. Caution flags aplenty, with a hefty dose of virtual laps wasted on said cautions. Gotta get those commercials in. I’d rather watch reruns of riding lawnmower racing if ESPN would show them.

Did check out the Richmond race. Man, NASCAR has devolved into a unrecognizable spectacle of its former self. Those folks in Richmond (true fans) have moved on to better things to occupy their time and resources. What a shame.

Bill B
Reply to  Shayne Flaherty

It was hilarious. I watched a few minutes of the cherry pit spitting and stone skipping just to see what they were like (about what you’d expect).

Just like any other race, the beginning weeded out problems. Action improved as laps passed. And the finish got me as emotionally involved as the reasonable singing of the National anthem.
My heartfelt thanks to the participants.