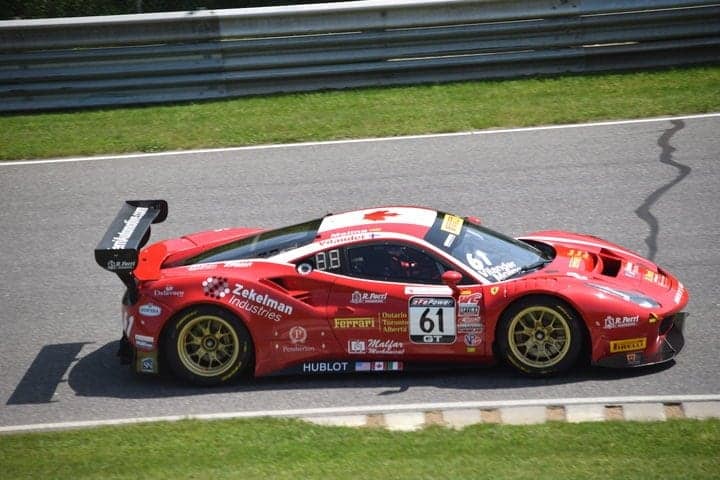 “It was awesome, [but] it was not easy,” Vilander said after the race. “Difficult conditions out there today, but the R. Ferri Motorsport team did a great job. Also, congrats to Daniel. It’s not easy to come in the middle of the championship [to race], even if you know the car. Overall, [I’m] very happy for  everyone at R. Ferri Motorsport.”

Parente qualified on the pole Saturday and was able to open up a decent lead over Serra, who was tapped to drive the No. 61 Ferrari in place of Miguel Molina. With Sam Bird being unable to come to a deal to stay with AF Corse, Molina was promoted to full-time status with the team in the FIA World Endurance Championship, which is racing this weekend at Silverstone.

Parente was able to run out to a three-second lead prior to the mandatory pit stops. However, when he made the move to go to pit road, the lapped Crowdstrike Mercedes of George Kurtz was directly in front of him. Instantaneously, Parente’s three-second lead was gone. The stop itself was a disaster as the K-PAX Racing team had trouble changing both rear tires. The result was a five-second loss in the pits, more than enough for R. Ferri Motorsport to jump over the K-PAX Bentley and take the overall lead.

With no cautions for the entire 90-minute race, the field became spread out. K-PAX Racing’s Andy Soucek couldn’t quite match Vilander. No one else was in the same league as either driver as Vilander took the victory for Ferrari.

The margin of victory was 2.86 seconds over Parente and Soucek, although the margin was closer to five seconds late in the event. Rodrigo Baptista and Maxime Soulet in the second K-PAX Bentley were third. Wright Motorsports’ Scott Hargrove and Patrick Long were fourth in their Porsche, while Alegra Motorsports’ Wolf Henzler and Marco Holzer were fifth.

In Pro-Am, Wright Motorsports’ Anthony Imperato started from the class pole, but RealTime Racing’s Mike Hedlund was able to get past on the first lap. It was an advantage that RealTime Racing would not give up. Hedlund, who will share the car for the remainder of the season with Dane Cameron, pulled away from Imperato throughout his stint in the car. Once Cameron got in, he started making inroads on the Pro entries before taking the class victory in sixth overall.

The margin of victory was 15.076 seconds over Imperato and Dennis Olsen in their Porsche. Racers Edge Motorsports’ Martin Barkey and Kyle Marcelli were third in their Acura. In the Am class, Squadra Corse Garage Italia’s Martin Fuentes and Mark Issa claimed the victory in 10th overall.

Race No. 2 from Watkins Glen is scheduled to go green at 3:10 p.m. Sunday afternoon. Live coverage of the race will air on CBS Sports Network starting at 3 p.m.