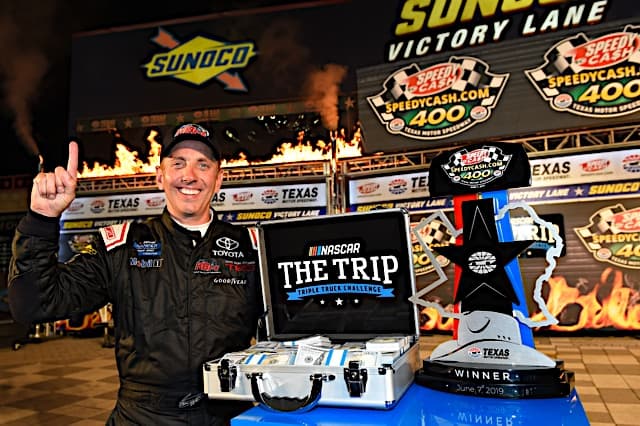 In a Nutshell: Greg Biffle did Kyle Busch things in a Kyle Busch Motorsports truck at Texas Motor Speedway Friday night (June 7) and won the SpeedyCash.com 400. In his first Gander Outdoors Truck Series start in 15 years, the veteran driver hopped into the No. 51 Toyota and led twice for just 18 laps, including the one that mattered most.

“It means a lot to me that Kyle (Busch) gave me this opportunity to come back and drive this truck,” Biffle said. “I am just excited to be here. I don’t even know what to say. I am so thankful for all the opportunities I have had to drive great trucks. This thing was really fast.”

Matt Crafton, who made a hard charge at Biffle a few times inside 20 laps remaining, ended up finishing second, nearly a full second behind the race winner. Rookie Tyler Ankrum scored a career-best finish in third, followed by Grant Enfinger. Harrison Burton rounded out the top five.

Who Should Have Won: In reality, several drivers showed their strength throughout the race, and no one competitor had a stranglehold on the competition. But when it came down to a 10-lap shootout for the checkered flag, Biffle found his way to the front of the field and held off a hard-charging Crafton for what may go down as one of the most popular wins this season.

You don't suppose @gbiffle is happy do you? The crowd went nuts when he got out of the truck. #NASCAR #SpeedyCash400 pic.twitter.com/2YO3UALlhr

When you work for Busch, there’s no doubt that position comes with high expectations for on-track performance, especially with an organization like KBM that has a reputation for winning races and a couple of championships along the way.

So of course, the spotlight shines squarely on rookie Burton and his sophomore teammate Todd Gilliland. The team itself has been in the headlines all week after team owner Busch was less than complimentary of his drivers.

Enter a crew chief swap that took Marcus Richmond away from the No. 4 team and put interim crew chief Wes Ward atop the pit box for Texas. Suddenly, Gilliland showed solid speed in practice on Thursday and followed it up with a pole-winning qualifying lap Friday afternoon.

Fast forward to the race and Gilliland led twice for 31 laps before getting loose and spinning while running inside the top five. The wall contact proved terminal and Gilliland was left to settle for a disappointing 27th-place finish and his third DNF in nine starts this season.

What’s interesting is just how quickly people want to sideline Gilliland, though. Sure, he hasn’t had the greatest finishes, especially this season. But he’s also just barely 19 years old and still maturing and gaining track experience. Sure, KBM equipment comes along with the expectation that he should be able to win races and run up front on a regular basis, but some have taken to the Truck Series faster than others.

While his job may be in jeopardy when it comes to setting the 2020 team lineup, unless things get drastically worse — and I mean much worse — in all likelihood, Gilliland will still finish out the season behind the wheel of the No. 4 Toyota. But I can say almost without a doubt that if he doesn’t manage to find victory lane at some point this season, he will no longer work for KBM once the checkered flag flies on 2019.

Texas Motor Speedway might hold a special place in Ankrum’s heart for quite some time after his Friday night. He graduated from high school before driver intros on the temporary stage set up on the track, and by the time the end of stage one rolled around, he had smacked the wall, went two laps down, received the free pass twice and rejoined the lead lap.

But that’s only the beginning. Just a handful of laps before the conclusion of stage two, Ankrum spun inside Stewart Friesen and made an incredible slide down pit road before righting the No. 17 Toyota and starting all over again two laps down. The high number of cautions allowed for two more free passes and another shot at racing on the lead lap.

This time, Ankrum took his truck all the way to a third-place finish, besting his career high.

At the end of the day, an exhausted Ankrum walked away with a career-best third-place finish and some incredible highlight reels to talk about at family functions for many years to come. And while DGR-Crosley hasn’t always been the team you might put in the conversation for potential race winners, Ankrum has proven that his group is capable of running up front and capitalizing on its success.

After all, they did finish third after an adventurous day. Friday night’s race will definitely go down as one of those what-if moments, where you wonder what more, could have been had without the setbacks.

Number of Rookies in the Race: 7

Rookie of the Race: Ankrum

What a night last night!! Thank you to @DGR_Crosley @eddiegossage @TXMotorSpeedway @TruexManagement @RAILBLAZA_USA Graduation ✅ slid down pit road✅ finished p3 ✅ have the best team and partners ✅✅ I’m grateful that I have the best team,family and friends that support me! ??

Up Next: The Gander Outdoors Truck Series heads to Iowa Speedway for the second race in the Triple Truck Challenge where the $50,000 added incentive to win remains in place. Coverage for the M&M’s 200 begins Saturday, June 15 at 8:30 p.m. ET on FOX Sports 1; the race can also be heard on your local MRN affiliate or SiriusXM NASCAR Channel 90.

Hmmm. Looks like Kyle was right to be harsh on his young drivers, proving it’s not the team or the equipment. Although, this is almost adding salt to the wound and grinding it in.