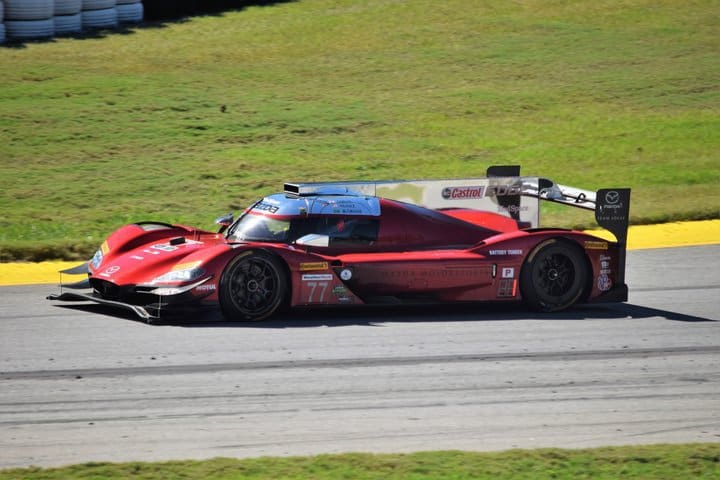 Mazda Team Joest’s Oliver Jarvis set an unofficial IMSA WeatherTech SportsCar Championship track record to top the charts in Practice No. 4 Friday (Oct. 12) at Road Atlanta.  Jarvis’ lap at 129.178 mph was more than half a second faster than the official track record, which was Helio Castroneves‘ pole lap last year.

The Prototype class was unusually tight during the session.  The top five drivers were separated by less than one-seventh of a second.  The top 12 drivers all the way back to Acura Team Penske’s Juan Pablo Montoya were all within one second of Jarvis’ time.

In GT Le Mans, Corvette Racing continued to show their might.  Tommy Milner was fastest with a lap of 118.230 mph, less than two-hundredths of a second faster than teammate Antonio Garcia.  BMW Team RLL’s John Edwards was third quickest, followed by Ford Chip Ganassi Racing IMSA’s Richard Westbrook.  Porsche GT Team’s Earl Bamber was fifth.  The nine cars were separated by less than six-tenths of a second.

GT Daytona saw Montaplast by Land-Motorsport’s Sheldon van der Linde lead the pack in his Audi with a lap at 115.187 mph.  Van der Linde was a third of a second faster than Meyer Shank Racing’s Àlvaro Parente in the No. 86 Acura.  3GT Racing’s Jack Hawksworth was third fastest in his Lexus, followed by Mario Farnbacher in the No. 93 Acura for Meyer Shank Racing.  Magnus Racing’s Andrew Davis was fifth.

The next time that the IMSA WeatherTech SportsCar Championship teams will be on the 2.54-mile road course will be for qualifying.  Qualifying is scheduled for 3:55 p.m. and will be streamed live at both IMSA.com and FansChoice.tv.