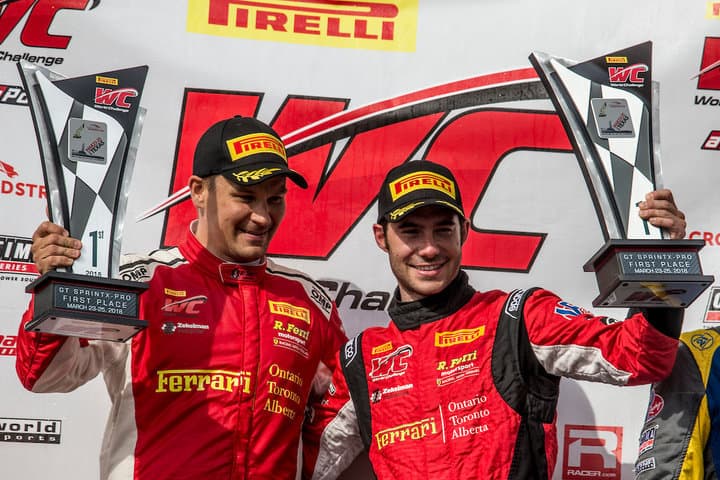 R. Ferri Motorsport’s Toni Vilander was able to pass K-PAX Racing’s Rodrigo Baptista just before the 25-minute mark of Saturday’s GT SprintX Race No. 1 from Utah Motorsports Campus.  From there, Vilander and teammate Miguel Molina were not challenged on their way to their fifth SprintX win of the season.  The win all but clinches the SprintX championship for the R. Ferri duo.

That said, it wasn’t all easy for Molina once he got in the car.

“Once I got in the car, I knew it was good, but with cold tires…it’s always a tricky moment,” Molina said after the race.  “[The crew] told me that I had a good gap, so I could take it a bit easy.  I’m really happy for the win.  Everything is going [right].”

K-PAX Racing’s Àlvaro Parente started from the pole in his Bentley, but it was simply not his day to shine.  The No. 9 Bentley immediately developed a wheel speed sensor issue.  That led to another problem with the car’s ABS system.  In other words, Parente was constantly locking up his brakes.

Teammate Baptista was able to snatch the lead away from Parente on the first lap.  While Baptista did battle at the front, Parente slowly dropped back as his issues became worse and worse.  Seven laps in, K-PAX Racing made the decision to pull Parente in to address the issues.

At the front, Baptista opened up a couple of seconds on the field.  However, he came back to everyone else when the tires started to go away on his Bentley.  Vilander was able to run Baptista down and take the lead.

After the stops, Molina came out of the pits with a three-second lead.  He simply maintained that gap for the rest of the race to take the win.

Alegra Motorsports’ Michael Christensen and Spencer Pumpelly finished second in their Porsche, 3.782 seconds back.  Right behind was the Lone Star Racing Mercedes for Scott Heckert and Mike Skeen.  PFAFF Motorsports’ Scott Hargrove and Wolf Henzler were fourth.  Baptista and teammate Maxime Soulet had a bad pit stop that dropped them down to a seventh-place finish overall, fifth in Pro-Pro.

The Pro-Am class was a race-long duel between TR3 Racing and TruSpeed AutoSport.  Wei Lu led early in the TR3 Racing Ferrari with Parker Chase giving chase in his Audi.

It was the pit stop that nearly decided the race.  Chase stayed out one extra lap before handing over to Ryan Dalziel.  Dalziel faltered a little bit while coming out of his pit box.  That put him back out on track just as Jeff Segal was coming past in the Ferrari.  Dalziel tried to block Segal, but was unable to keep Segal behind.

For the rest of the race, Dalziel hounded Segal, but was never able to get past as Segal and Lu held on to take their second Pro-Am of the year.  The run was also good enough to finish fifth overall.

Dalziel and Chase were less than a quarter of a second back in second.  Dream Racing Motorsport’a Alessandro Bressan and Yuki Harata were third in their Lamborghini, but over 27 seconds back.

In the Am class, Squadra Corse Garage Italia Caesar Bacarella ran into problems almost from the drop of the green flag.  A spin on the first lap and a long recovery meant that Bacarella was 37 seconds behind Turner Motorsport’s Takuya Shirasaka after the first lap.

Shirasaka led until the pit stops, but had a disastrous stop.  The minimum time that teams must spend in the pit lane is 67 seconds at Utah Motorsports Campus.  Turner Motorsport took over 78 seconds to get switched over to Naoto Takeda and get back on track.

The bad pit stop was enough to give the class lead over to DXDT Racing’s David Askew.  Worse, Takeda had a heck of a time getting up to speed.  He had a series of slow laps and an off-course excursion.  Both of those allowed Martin Fuentes to run Takeda down from behind and take second in class with 20 minutes remaining.

At the time Fuentes took second away, he was an insurmountable 44 seconds behind Askew.  Over the final 11 or so laps of the race, Fuentes cut 19 seconds off of Askew’s lead, but could do nothing to prevent Askew from taking his first Am win of the year.  The victory prevented Bacarella and Fuentes from sweeping the season in the Am.

Despite early issues and spending time behind the wall, the No. 9 Bentley with Andy Soucek behind the wheel set the fastest lap of the race (100.288 mph) on the final lap.  So, despite finishing Race No. 1 19 laps down and not scoring points, Soucek will start Race No. 2 on pole.

The final GT SprintX race of 2018 is scheduled to go green at 5 p.m. EDT on Sunday (3 p.m. local time).  It will be streamed live on YouTube and World-Challenge.com.