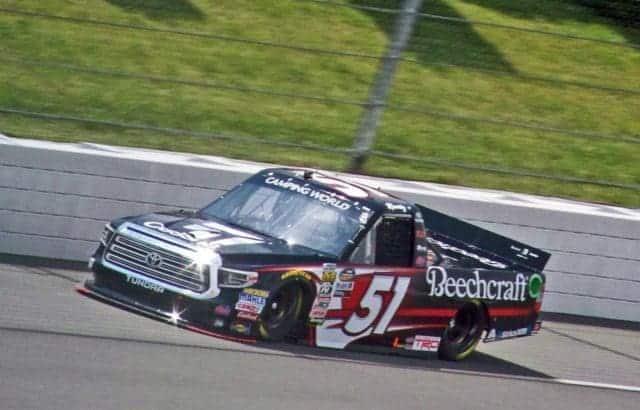 Kyle Busch wanted to be on his own in the track record books and in the second round of qualifying, he did just that. On Saturday morning, Busch put the No. 51 Cessna Toyota Tundra on the pole for Saturday’s (July 28) Gander Outdoors 150 at Pocono Raceway. Busch swept both rounds of single-truck qualifying to secure his 21st career pole and the first pole of his career at the Pocono Raceway.

In the first round of qualifying Busch tied Ben Rhodes for the qualifying track record at the track. During the final round, Busch turned a 170.345-mph lap to stand on his own as the track qualifying record holder. His lap was 0.312 mph faster than the old track record held by Rhodes.

Busch’s driver and teammate Todd Gilliland will start from the second position. The second-place start for Gilliland results in the fourth front row start of his career.

Justin Haley qualified in third while Dalton Sargeant and Grant Enfinger rounded out the top-five speeds.

A total of three drivers failed to turn a lap during the session. Brett Moffitt, of course, had to change engines following Friday’s practice session meaning he was going to have to start from the rear anyway. Stewart Friesen put part of the front of his truck on the apron in the tunnel turn and it ultimately sent him spinning. He was able to save it and didn’t make any contact with the outside wall. Being as he flat-spotted those tires, the team will have to change those tires which will result in the No. 52 starting from the rear.

The third driver who failed to turn a lap during the session was the driver of the No. 18 Toyota Tundra. Noah Gragson, who has been battling a stomach virus this weekend, was taken to the infield care center for treatment during the session. FOX Sports reported that the team wants Gragson to start the race if he’s able.

Only 32 trucks were entered, so no drivers failed to qualify for this weekend’s event.