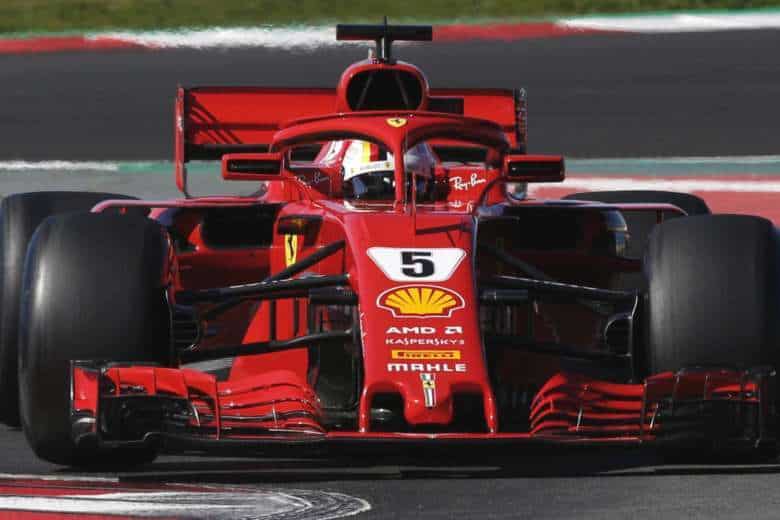 Sebastian Vettel dominated most of the British Grand Prix on Sunday afternoon at the Silverstone International Circuit, taking the lead from the start, along with one pit stop and two safety car periods, to claim victory over a recovering Lewis Hamilton, with Kimi Raikkonen finishing in third.

Vettel took his 51st win of his career, by passing Valtteri Bottas with just five laps from the end of the race, after taking the lead at the start, when Hamilton got off to a slow beginning. It was made worse for the Briton when he was struck by Raikkonen on the opening lap at turn three, spinning him off the track. Hamilton recovered and quickly passed many of the drivers, moving up the grid to third position with just ten laps to go in the race. For Raikkonen, his position might have been jeopardized when the Finn was given a ten second penalty for causing the collision. Vettel pitted for the first of two times on lap 21, which gave Bottas the lead, but regained his top spot when the Finn did the same.

Vettel was pleased afterwards and felt that certain events during the race made it a lot more exciting.

“Yeah, obviously the safety car spiced it up.” He said. “It was a nice time because Valtteri (Bottas) was pushing like crazy. I had the advantage on tires, but it was not so easy to find a way through but then I surprised him. I wasn’t sure I’d make the corner, but I did, so it worked really and very, very happy. Great thanks to the team supporting me and the people in the background because yesterday I was a bit damaged but much better shape today, it was no problem, so yeah, really, really happy.”

Marcus Ericsson crashed his Sauber on lap 33 at Abbey corner and brought out the first safety car of the day, but immediately afterwards, both Romain Grosjean of Haas and Renault’s Carlos Sainz Jr. collided in a tight corner at Copse, knocking both cars out, and initiating the second safety car immediately afterwards. Vettel had taken an advantage in the Ericsson incident, by coming in for fresh tires when the safety car was deployed. Both Hamilton and Bottas did not pit their Mercedes cars.

This strategy was working for Hamilton, as well as for Bottas, who thought that he could hold off Vettel to claim a victory. But Bottas tires were wearing and Vettel, who had better pace on his softer tires, had enough pace to pass Bottas on lap 47, with Hamilton passing his teammate moments later. But while Vettel took the victory, Raikkonen was moving up quickly, passing Bottas late and taking the final podium spot.

Daniel Ricciardo took fifth in his Red Bull, while Nico Hulkenberg made up for a bad performance in his Renault in the last race by placing sixth. Esteban Ocon was seventh, while Fernando Alonso finished in eighth. The American Haas F1 Team got two points for the day with Kevin Magnussen ninth, and Pierre Gasly just took the last point position by passing Sergio Perez laps from the end.

For Vettel and especially his Ferrari team, it is their first win at this circuit since 2011, and the victory now puts Vettel eight points ahead of Hamilton with his home race in Germany two weeks away. But even with a bad neck, it did not bother Vettel to concentrate on getting things done.

“I was as well going into the race, but it was fine.” Vettel added. “I think with all the adrenalin going… probably I will feel it a little bit tonight. It doesn’t matter. It held up. The race was fantastic; we got a great crowd. A race I enjoyed a lot, I think the people enjoyed it a lot, really an amazing day.”

Doesn’t seem to be much to choose between Ferrari and Mercedes at this point. But the development wars continue so stay tuned.

I find Kimi’s attitude pretty cool, it is what it is mind set. I see a lot of Kyle Busch in Lewis Hamilton when not winning.

David Edwards
Reply to  Tom B

Have to agree you you, at least to so extent, about Lewis. Not sure Kyle Busch is a good comparison, but will take it.
We will see how Lewis adapts if Ferrari, and occasionally Red Bul keep taking the fight to them.

As for Kimi, think maybe the closest comparison is Fernando. Although Fernando can be a diva at times .