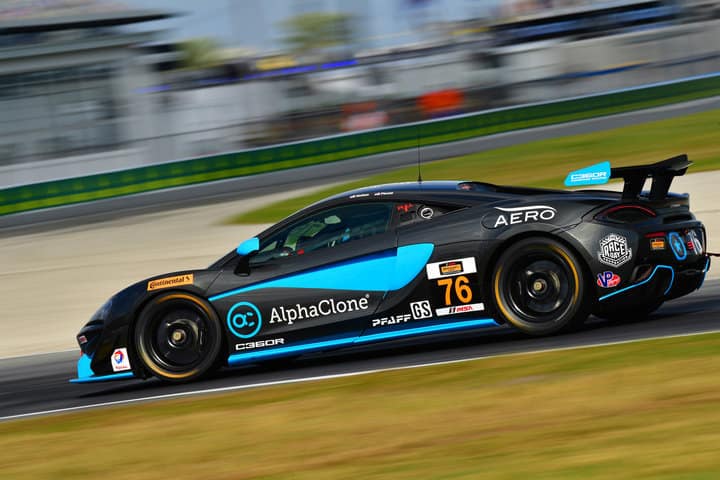 On Friday afternoon, C360R’s Paul Holton got only one hot lap in a shortened qualifying session.  That was all that was necessary.

Holton’s one-lap at speed turned out to be the fastest CTSC lap of the whole weekend, at 117.578 seconds (104.101 mph), more than enough for the overall pole.  Afterwards, Holton downplayed his advantage over the field.

“It’s actually really good to be on the pole again, but I think that because of the conditions…I think some of the other guys were a bit too cautious,” Holton said in the garage.  “They might not have been using the curbs.  I used every bit of the curbs like it was dry, because it was dry.  The gap should have been a little smaller.”

Holton’s gap ended up being .821 of a second over KohR Motorsports’ Jack Roush Jr. in the lone Ford Mustang GT4 in the field.  Motorsports in Action’s Jesse Lazare, driving a car rebuilt after a pre-race fire in Austin, qualified third in class.  TeamTGM’s Hugh Plumb qualified fourth in the team’s full GT4-spec Cayman, while Rennsport One’s Dylan Murcott was fifth.

In Street Tuner, the track was a little damper at the beginning of the session, leading to even more in the way of gunshy drivers.  However, Rennsport One’s Nick Galante was not gunshy at all.  He went for it from the very beginning and was rewarded with a lap of 127.583 seconds (95.938 mph), good enough for his first career pole.

To Galante, just putting himself out there on track was key.

“Getting out early really helped me out,” Galante said in the garage.  “I think the people that waited may have expected [the track] to still be wet, or they weren’t sure.”

Galante’s primary competition for the pole was CRG-I Do Borrow’s Sarah Cattaneo.  Cattaneo held the class pole with less than five minutes to go before Galante was able to snatch it back.  On her final lap of the session, Cattaneo was on what was likely the fastest lap of the session when she ran up on Aurora Straus in the No. 18 Cayman. Contact was apparently made and Straus crashed just before the entry to turn 11.  Straus walked away from the crash, but was unable to restart her Cayman.  The incident caused a red flag that ended the session.

Under IMSA rules, if you cause a red flag in qualifying, you lose your fastest lap.  Cattaneo completed the session second in class in her Altima.  Losing that lap dropped Cattaneo back to fifth.

Freedom Autosport’s No. 25 has been ruled out for the rest of the weekend due to Stevan McAleer‘s crash in practice Friday morning.  However, the team has borrowed the backup car for Murillo Racing, which uses No. 43.  With very little time on-track, Chad McCumbee was able to qualify that car eighth in class.

The Continental Tire 120 at the Glen is scheduled to go green at 2:25 p.m. ET on Saturday.  The race can be streamed live at both IMSA.com and FansChoice.tv.