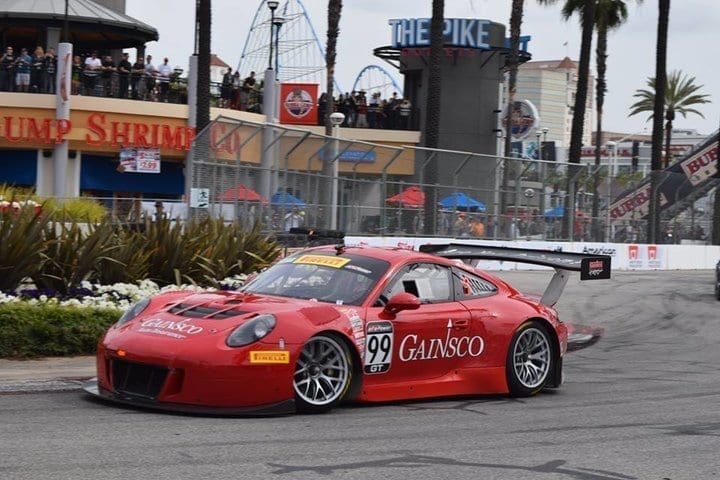 On Thursday, GAINSCO/Bob Stallings Racing announced that Porsche factory racer Wolf Henzler will join regular driver Jon Fogarty in the No. 99 GAINSCO “Red Dragon” Porsche 911 GT3 R for two Sprint-X races later this season.  The team is primarily focusing on the GT sprint races.  However, the team will compete in the Sprint-X races later this season at Utah Motorsports Campus (formerly Miller Motorsports Park) and Circuit of the Americas.

Team owner Bob Stallings is quite pleased to have a driver like Henzler in the fold to help the team with their Porsche.

“We chose not to participate in 2017 SprintX primarily so we could focus on a robust testing schedule with our new race car,” Stallings said in a press release.  “Wolf [Henzler] has been helping us with our testing of the new Red Dragon this year and we have decided to enter two SprintX races later this year in anticipation of running a full schedule in PWC in 2018.  [Henzler] is a seasoned pro with a vast knowledge of the Porsche GT3. Jon Fogarty and our engineer John Ward have had great experiences with [Henzler] previously and he has fit in seamlessly with our team this year.  These two races will give us an excellent opportunity to test the Sprint-X format.”

GAINSCO/Bob Stallings Racing is slowly working their way back up to full-time status in the top class.  Last season, the team competed in Pirelli World Challenge’s GT class with a McLaren 650S GT3.

In 2014, GAINSCO Bob Stallings Racing was planning on running full-time in the TUDOR United SportsCar Championship.  However, the team’s Daytona Prototype was infamously destroyed during the Rolex 24 at Daytona in a catastrophic crash where Memo Gidley ran into the near-stationary Risi Competizione Ferrari 458 GT2 of Matteo Malucelli while running wide open.

Gidley broke both legs and his back in the crash.  He has since undergone multiple surgeries and is able to live a normal life.  While he has made a significant recovery, Gidley has not returned to major racing as of yet.

In the wake of the crash, the GAINSCO/Bob Stallings Racing team took a step back from racing and voluntarily sat out the rest of the 2014 season.  For 2015, the team ran a Hyundai Genesis Coupe in Pirelli World Challenge’s GTS class with Fogarty driving.