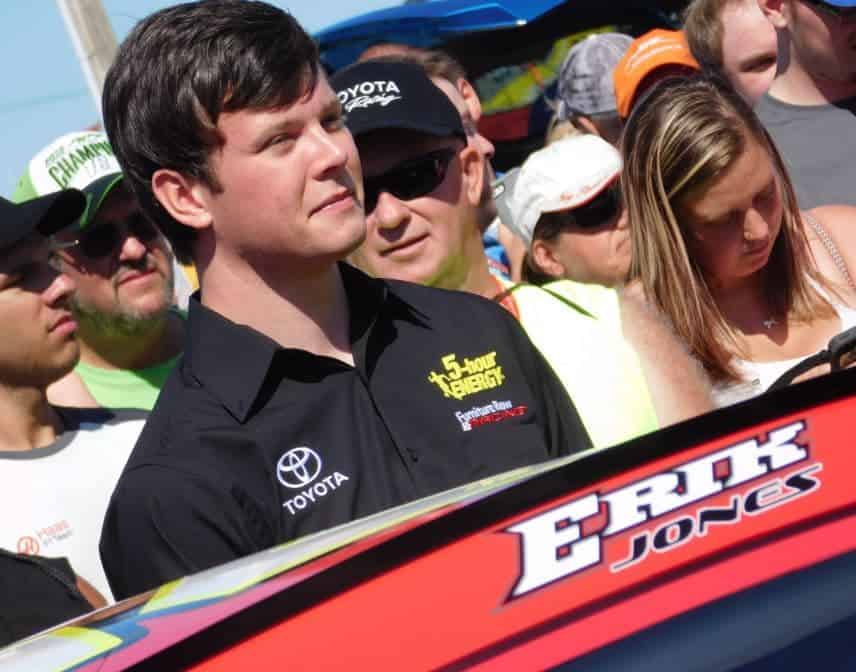 Late in the Drive for Safety 300 at Chicagoland Speedway, Erik Jones grabbed hold of an opportunity to win the race and never let go.

After running in the top 5 for most of the event, Jones found himself dueling with Elliott Sadler for the lead with 10 laps to go.  Jones completed the pass and held off a hard-charging Kyle Larson in the final circuits.  Jones won his fourth race of the season and solidified his place as the number one seed in the inaugural XFINITY Series Chase, which begins next weekend.

“Man, what an awesome day, to get a win here right before the Chase,” Jones said in Victory Lane.  “This is some great momentum for us.”

Much like Jones’ first win of the year at Bristol, Chicagoland looked like it would be the latest installment of the Kyle and Kyle Show, with Kyle Busch and Kyle Larson having the two fastest cars.  However, late-race problems took both drivers out of contention.

With 50 laps left in the 200-lap race, Jones and Larson were running down Busch, who had dominated the afternoon.  Larson made a scheduled green-flag stop on lap 154, while Busch and Jones pitted the following lap.  Larson was subsequently penalized for exiting pit road too fast, dropping him far behind the leaders.  He did manage to stay on the lead lap, and a caution on lap 160 for Jordan Anderson’s stalled car allowed Larson to catch back up to the front runners.

The race restarted on lap 166 with Busch leading and Jones in second.  Both drivers raced side by side for nearly a lap before Busch got the advantage and began to pull away.  Justin Allgaier also slipped past Jones, dropping the No. 20 car down to third.

On lap 182, Busch suddenly slowed in turn one while leading, then went spinning as his tire went flat.  Busch had led 154 laps total, but was left with little time to recover.  He would finish 13th.

Most of the lead lap drivers pitted under the following caution.  Paul Menard won the race off pit road by taking two tires.  However, everyone would line up behind Clint Bowyer and Sadler, both of whom did not pit, on the restart.  While Sadler broke away from the field at first, Jones was able to run him down on newer tires and take the lead away.

However, Larson was charging up through the field and rapidly closed in on Jones by running the high line.  With three laps to go, Jones made the decision to run the high line himself, thereby limiting Larson’s options for making a pass.  Larson tried to find a way around the No. 20 car but scraped the wall on the last lap, allowing Jones to drive away and secure the victory.  Sadler, Daniel Suarez and Allgaier completed the top five.

Jones’ victory is the seventh by an XFINITY regular this year.  His four wins give him 12 bonus points towards the first round of the Chase, followed by Sadler with two wins and six points, then Suarez with one win and three points.

Going into Saturday’s race at Chicagoland, two Chase spots were still up for grabs.  It turned out that both drivers who entered the race ahead of the Chase cutoff stayed there.  Ryan Sieg had an up-and-down race, but his 12th place finish was more than enough to secure a Chase berth.  Blake Koch also guaranteed himself a place in the postseason with a 15th-place result.  Jeremy Clements and Dakoda Armstrong, the last two drivers who could have reached the Chase on points, had more disappointing days.  Clements came home 16th, while Armstrong struggled to finish 22nd.  Neither driver will compete in the Chase this year.

Jones is not the only Joe Gibbs Racing driver who will have momentum going into the Chase.  Suarez had a fast car and led early, but the No. 19 had to surrender its track position for a second trip to pit road after the second caution on lap 26.  When several drivers scrambled to exit pit road three- and four-wide, Suarez received damage, first in the left front from Bowyer and then in the right front from Brennan Poole.  Suarez returned to pit road so his crew could fix the damage.

It took most of the race for Suarez to recover.  He never got the lead back, but he did score his 12th top 5 of the year in 26 races.

On the flip side, Roush Fenway Racing lacks momentum going into the Chase.  Darrell Wallace, Jr. was a non-factor at Chicagoland, and a late speeding penalty knocked him back to 20th, two laps down.  The No. 6 team has only two top-10 finishes in the last 10 races.

Wallace’s teammate Ryan Reed was having a better run, until contact with Larson sent him into the backstretch wall.  Reed spun while trying to get on to pit road on lap 83 and was fighting his way forward.  But on lap 101, Larson got a great run in the high groove off the exit of turn 2 and tried to get past Reed.  The two drivers made contact and Reed hit the outside wall nose-first.  The damage ended Reed’s day with a 32nd-place finish.

Underdog Performance(s) of the Race

JJ Yeley is quietly posting respectable finishes with TriStar Motorsports.  His latest efforts netted a 14th place at Chicagoland.  Meanwhile, Ryan Preece had a nice race at Chicagoland too.  Preece stayed on the lead lap for the balance of the afternoon and employed some pit strategy to run in the top 10.  However, the strategy left Preece with older tires during the last green-flag run, and he faded to 17th.

Bowyer made his first XFINITY start of 2016, racing for JR Motorsports.  He and Team Penske driver Joey Logano each led a handful of laps Saturday afternoon using alternate pit strategies, but neither could hold the lead for very long.  Bowyer finished sixth and Logano finished seventh.

Paul Menard took a much tougher road to finish in the top 10.  On lap 14, the No. 2 slowed with a flat tire, apparently after making contact with Poole.  Menard dropped off the lead lap but stayed in the race, getting the free pass on lap 103.  He finished ninth.

The rest of the double duty drivers had poor finishes.  Matt DiBenedetto dropped out of the race early and finished last, while Travis Kvapil exited the race on lap 89 after blowing an engine and bringing out the caution.  He would finish 33rd.  Jordan Anderson, meanwhile, suffered a transmission failure and finished 29th.

Anderson did have one interesting moment during his second NXS start of the season.  During a green flag pit stop cycle just before the third caution on lap 83, Busch appeared to pass Anderson on the left while on pit road.  Passing in the pits while on the left has occasionally drawn a penalty from NASCAR.  Race officials ruled, however, that Anderson was actually leaving pit road while Busch was entering, so the No. 18 team was not issued a penalty.

Just one week ago, Jones was lamenting a lack of opportunities to win races, particularly by having to compete with Busch.  Jones got a win and a little extra assurance for the round of 12 in the Chase.  It is to his point, though, that Busch’s late spin really opened the door for an XFINITY regular to visit Victory Lane.

Jones also talked up JGR’s intermediate track program after the race, and with good reason.  Five of the seven NXS Chase races are on 1.5-mile tracks, so whoever wants to win the championship will have to perform well there.  JGR clearly has the upper hand in terms of speed, and Jone’s fourth victory solidifies his position as the championship favorite.

Meanwhile, four drivers will be eliminated after Charlotte in three weeks.  Sieg and Koch both face long odds to advance through the Chase, but they have nothing to lose at present.  The Roush drivers getting knocked out in the Round of 12 would be a bigger disappointment for that team, but both Wallace and Reed could miss the cut unless they find a little more speed.  Yet the reality is that all 12 of the Chasers will have tread carefully to keep their championship hopes alive.

It is back to the Bluegrass State on Saturday, Sept. 24, for the VisitMyrtleBeach.com 300.  Kentucky Speedway will host the first ever XFINITY Series Chase race.  Race coverage begins at 8 p.m. ET on NBCSN.