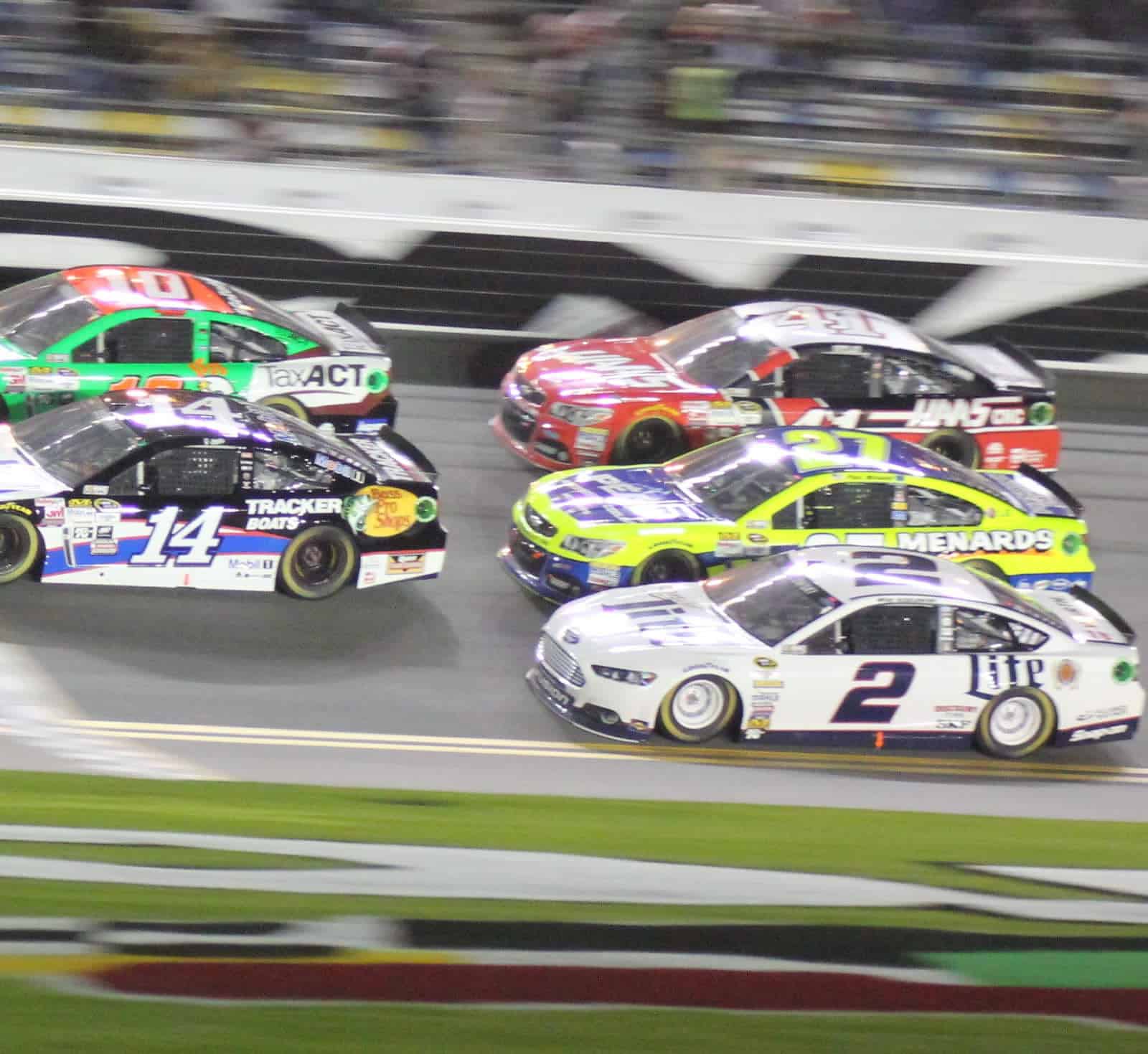 Did You Notice? There’s rarely any rhyme or reason to plate racing? Only three top-10 finishers from last July’s Coke Zero 400 went back-to-back in February’s Daytona 500: Denny Hamlin, Casey Mears and Clint Bowyer. Of those three, only Hamlin has had a successful season, clinching a Chase bid early in the year at Martinsville. Mears has yet to finish inside the top 10 outside of Daytona while Bowyer, paired with struggling Michael Waltrip Racing, has been a second class citizen on the Cup circuit until the last month.

That does not bode well for our point leaders, as Kevin Harvick, Martin Truex Jr., Joey Logano, Dale Earnhardt Jr. and Jimmie Johnson are among those who, in theory, will have the Russian Roulette bullets turning their way. Does that open the door for an upset, like last July’s surprise victory by Aric Almirola?

The answer is a little bit of yes and no. This plate package, while favorable to the underdogs, doesn’t give them enough “oomph” to get up front. 189 laps in this year’s Daytona 500 were led by just four drivers, each of whom have top-tier equipment: Logano, Johnson, Earnhardt and pole sitter Jeff Gordon. The only underdogs to lead – Mears, Michael Annett and JJ Yeley – each did so for a lap under caution. NASCAR’s new restrictor-plate qualifying system, eliminating the group drafting format, should also keep the underfunded cars buried deep in the field to start.

That said, Mears in particular has been impressive on plate tracks in recent years. He has nothing to lose going for broke; his team will not make it in the Chase otherwise. Ditto for David Gilliland, whose 11th-place finish in February was a season best. Those two would be the ones I’d predict to surprise but expect an uphill battle; it would take the picture perfect scenario to make Victory Lane happen for either.

Did You Notice? NASCAR’s stance against the Confederate flag? Daytona Speedway is offering a “flag exchange” this weekend for anyone who owns one prior to the race; Confederate flags are still allowed but frowned upon as the sport looks to ban them from all upcoming events. Shortly after coming out in support of removing them from statehouse grounds, NASCAR CEO Brian France made clear the sport would “distance” itself from the symbol in the coming weeks.

“We’re working on how far we can go,” France told the Associated Press. “We are going to be as aggressive as we can to dissociate ourselves with that flag.”

If only the sport were as aggressive with changing its rules, tire compounds, qualifying… but I digress. The flag has come under scrutiny in the wake of the Charleston, South Carolina church shooting. Motivated by racism, that incident resulted in nine deaths and a 10th person seriously hurt as the shooter, Dylann Roof, used the flag itself as a symbol of his hatred.

NASCAR felt compelled to act in this wave of national outrage. Here’s the problem; the flag has not been a catalyst for incidents of racism at their own tracks. Why does it matter? The flag is easily identifiable for anyone who covers the sport, atop up to 1 in 4 campers in the infield at some events. Stock car racing, contracting back from a national phenomenon these days, still has many of its roots entrenched in the Deep South; and trust me, much of the Deep South still loves its Confederate flag.

How will these campers, spending in some cases thousands of dollars to attend NASCAR races, feel when they can’t unveil the flag they’ve used for years? Should they know better? Or will they rebel, claiming the sport is infringing on their belief system? Sometimes, it’s as simple as a cooler restriction that gets fans fed up and keeping them from attending races. With the competition “bleh” this season, will this move turn more fans away than they’ll make?

I’m torn on this decision. NASCAR, once a symbol for racism, saw Hall of Famer Wendell Scott endure tremendous hardship; he was its only successful African-American driver for decades. A sport that once openly supported segregationist George Wallace in presidential elections also suffered through the Mauricia Grant official scandal seven years ago. Grant, who filed a lawsuit against NASCAR alleging harassment and racist behavior, eventually settled out of court; the damage, including a claim co-workers wanted to kidnap her with KKK hoods, was extensive. For a sport pushing diversity, they would do well to keep distancing themselves from past behavior. Banning the flag puts them in position to champion a “new line of thinking.”

Where I worry, though, is stock car racing assuming the position of moral judge, jury and executioner. There will absolutely, like it or not, be some short-term pain in the form of lost fans angry NASCAR is trying to impinge on their traditions. I can honestly tell you, covering over 150 races, I’ve never seen the Confederate flag cause an incident in the garage or in the infield. Black owner Brad Daugherty spoke out this week, claiming the symbol “made his skin crawl” and that carries significant weight; however, most who criticize the flag now never raised it as a problem previously. Remember the NRA 500? You wonder if NASCAR stayed out of the fray, refusing to take a political stance, this push to remove the flag from races would have faded. Or, maybe Congress would have enacted a law, banning the symbol from certain events and the sanctioning body could have let legal backing take its course. Politics and sports, when blended together, never seem to end well….

Did You Notice? Quick hits before we take off….

“Or, maybe Congress would have enacted a law, banning the symbol from certain events and the sanctioning body could have let legal backing take its course.”

Not sure Congress can do this. It’s a first ammendment thing. Individual tracks and Nascar banning the flag at their events and on their own property is a different matter. It will be interesting to see how this all plays out.

My thought is that banning such a thing only serve to give it more power and that’s all i’ll say on that matter with the exception of I truly couldn’t give crap what mr France thinks as he has next to zero credibility on such matters.

I’d rather talk about how I noticed that now that KB has a win he’ll be forced to points race until he either makes it into the farcical chase or is outside of a mathematical possibility. This is probably a hit to the overall quality of racing we’ll see from him. I don’t think careful and calculated points racing is really his style or is something that reflect the type of racing that most fans want to see from him or anyone else.

When the pressure is on Shrub usually folds. That’s why he can miss the Chase with the most wins for the season (which is why we have the “Winner’s Rule), or be leading the points through half of the Chase and wind up no where near contention at the end.

On principle with him missing 11 races (regardless of why), I want him to continue his lawn chair and cheap suit folding ways and not get of whiff near anything “Chase” related. For the record I am no fan of his personality or his fame seeking wife, who is now making the infant a media whore. Sad stuff.

The NRA 500. When is the last time we’ve seen any association out of the NRA as far as a NASCAR race? Not hard to tell what their agenda was at the time. NASCAR should have been ashamed for allowing them to even sponsor the race considering the mood at the time. The NRA doesn’t care about racing or NASCAR fans.

Dan… Sorry but you’re wrong about that. The NRA is your neighbors, your co-workers, members of your church…. I personally know quite few ordinary folks who are both NRA members and NASCAR fans.

It always amazes me how businesses seem to want to stick their nose into every political or societal outrage and act like they have supported it all along. Most of the time the outrage comes from a bunch of hypocritical morons that have nothing better to do with their time (why else do we have outrage over every little thing) I think companies would be a whole lot better if they just stayed out of it. If Nascar said nothing, this whole thing would have gone away in a few weeks. A deranged lunatic killed those people, not the Confederate Flag. Stop trying to blame something that just isn’t there.

i’d still like to see brain fart france tell all those good ol’boys at dega to take their stars and bars flags down at the infield and camping grounds. that won’t be pretty, and i could probably guarantee that france wouldn’t win that fight. yes ‘dega is owned by the group at daytona, but fans in the south are southern pride. that’s what that symbol means to them.

besides, if you want to get technical, old glory has been a sign of strife and tribulation at times.

maybe we should stop being a nanny state and just be respectful of others and remember we all have the first amendment right of FREEDOM OF SPEECH.