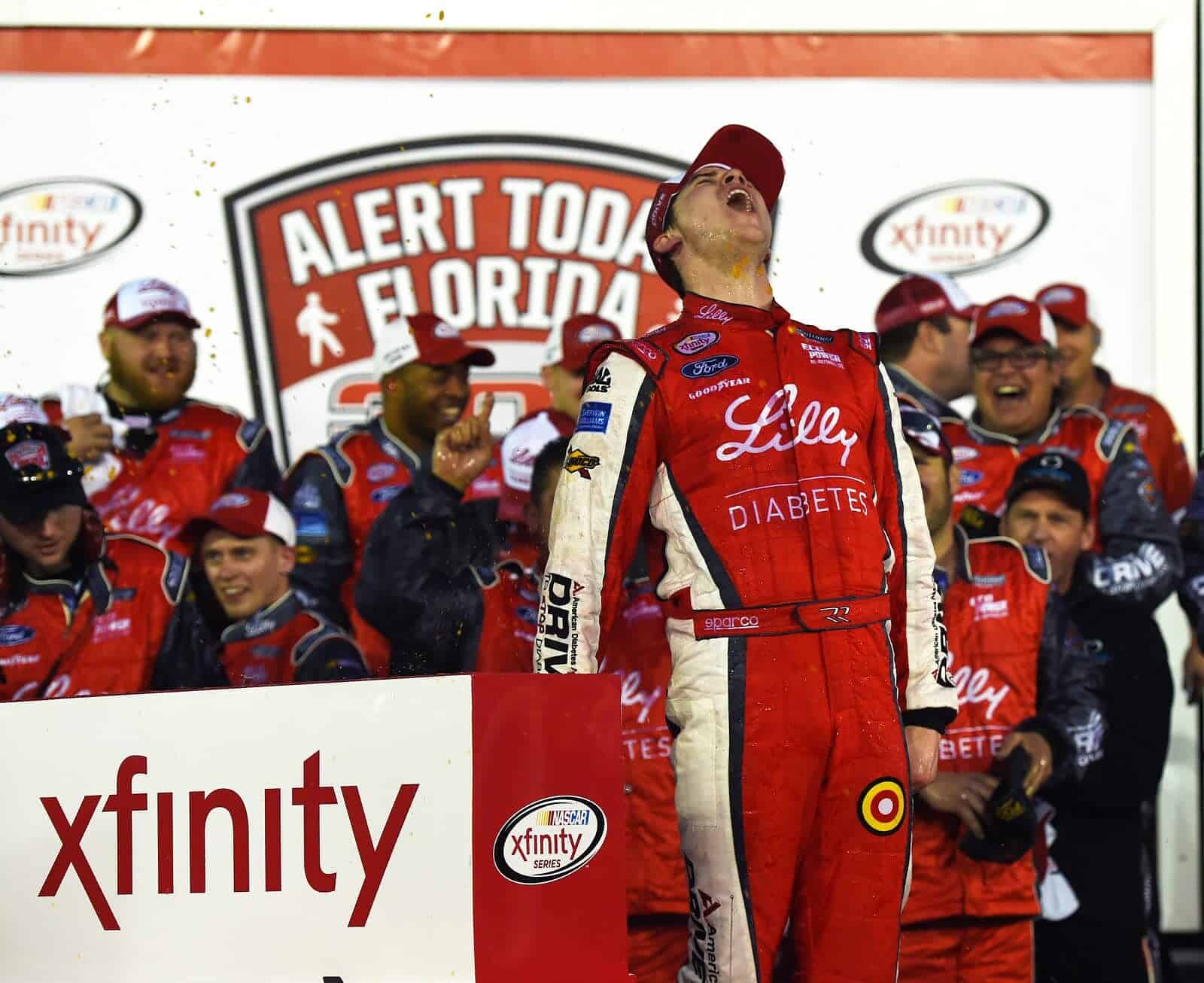 Heading into Saturday’s XFINITY series inaugural race at Daytona International Speedway, only four drivers had scored their first career series win in the event. That number is now five, thanks to Ryan Reed putting his Roush Fenway Ford into Victory Lane at the World Center of Speed. Reed led the race twice, the second time being just the final lap of the event, to score his maiden victory in a NASCAR national touring series event. Reed beat his teammate Chris Buescher to the line by .089 seconds for a RFR 1-2 finish after the two split to power past Brad Keselowski with Reed inside and Buescher on the top. Ty Dillon began his 2015 quest for a series championship with a podium finish just ahead of his brother Austin. Brad Keselowski led the field to the white flag but was engulfed by the pack on the back straight after his help evaporated coming out of the second turn and came home a disappointing fifth.

Reed is coming off of a 2014 season where he had two DNFs, 17 lead lap finishes and a disappointing ninth place result in points. Reed’s story is inspirational for several reasons, especially the fact that he is a Type 1 diabetic. After being told he would never race again several years ago, Reed has not only persevered in the sport but now scored a win at one of its highest levels. The win is also a boost for Roush Fenway Racing who has only notched two victories in the series in the last two years combined with three full-time drivers in 2014 and two full-time teams and one part-time team in 2013.

The triumph gives owner Jack Roush 134 XFINITY Series wins in the storied history of the organization and its first at Daytona. Reed is the tenth driver in the 22 years of XFINITY competition for Roush Fenway Racing to score a win in their cars. Kyle Busch led a race high 27 laps but ended the event on a stretcher headed to Halifax Health Medical Center with a leg injury. There were nine different leaders of the race who swapped the point 24 times over the 120 laps. The race was slowed by four cautions for a total of 17 laps with two red flags.

Any time there is a first time winner in a series it adds a special buzz to the event but a brand new winner at Daytona is doubly special. Ryan Reed is an inspirational story for people from all walks of life who are facing any medical situations. The drive and determination that has allowed him to overcome the perceived limitations that his illness imposed on him will inspire many people to pursue dreams they were previously told were unattainable.

Chris Buescher completed the 1-2 sweep for RFR and helped start 2015 off with a bang for the beleaguered organization. After 18 top 10s in 180 races over the last two seasons the company landed two top 5s and a win on Saturday.

TriStar Motorsports is a staple in the Xfinity series but seldom runs at the front of the pack. Saturday David Starr, after signing a three-year contract to drive for the team full-time with Zachary sponsorship, went out and finished sixth. For a team that cobbles together efforts to bring multiple cars to the race track on a weekly basis, a top l0 finish goes a long way toward getting the small organization to the track for weeks to come.

Regan Smith found out Friday night that he will be competing in the Daytona 500 on Sunday, replacing Kurt Busch. Smith led Saturday’s XFINITY race twice for 16 laps before barrel rolling on the front straight during the first of two big crashes during the race. Smith is one of the preseason favorites for the title in the series but his misfortune Saturday has him 37 points behind the leader of the point standings after just one race of the 2015 season.

Until the SAFER barrier discussion on Saturday night following Kyle Busch’s injury, the hot topic of the weekend has been qualifying. Saturday was the latest in a string of silliness on the race track, or more accurately the pit lane, during restrictor plate qualifying. Cars parked on pit road, waiting for one or two hot laps to try and make their way into the field instead of making multiple passes during ‘knockout’ qualifying has reduced the process to a farce. Whether the answer is single car qualifying or European style qualifying, or just a pill draw, is yet to be determined. One thing is for sure, the fiasco that is currently taking place does not work.

15 years after Dale Earnhardt’s death was the impetus for the installation of SAFER barriers throughout the racing world, there are still places that are unprotected by the steel and foam energy reduction walls. Kyle Busch found the inside wall at the end of the front straight at Daytona on Saturday evening and the result is a compound fracture of the right leg and an extended period outside the car for one of NASCAR’s stars. Busch was involved in the final big wreck of the day and the impact with the inside wall crushed the front of his car. Busch climbed from his car after the incident but fell to the ground and quickly pointed to his leg. He was put in an inflatable cast before being loaded on a stretched and transported to Halifax Health Medical Center.

After the first multi-car wreck on Saturday the field was stopped on the back straight for a red flag. As the front of the field had stopped on the track, Mike Wallace approached from mid-pack and failed to stop in a timely manner. As a result he locked up his brakes and slammed hard into the back of Austin Dillon’s parked car, damaging both vehicles. Dillon’s damage was mostly cosmetic while Wallace’s left front was significantly misshapen for the final 25 laps of the event.

Underdog Performers of the Race

Mike Harmon is most famous for destroying a car at Bristol and being blamed for stealing a race hauler from Jennifer Jo Cobb. Saturday Harmon put his No. 74 Dodge into the second round of qualifying for the Alert Today Florida 300 and ended up the race with a 24th place finish. While that might not sound all that impressive, for a driver who finished above 30th just three times in 2014 and didn’t finish higher than 28th in the 16 races he competed, it is a quality effort.

Mario Gosselin started Saturday’s race in 37th place. He avoided the mayhem and soldiered home to a 15th place finish. Gosselin has competed in four XFINITY races since 1998 and this week’s result was his best finish of his career in the series.

The race on Saturday saw 10 drivers who have declared for points in other series start the race. Austin Dillon and Brad Keselowski finished fourth and fifth to round out the top 5. Aric Almirola, Kyle Larson and Dale Earnhardt, Jr. all finished in the second half of the top 10. Mike Wallace came home 13th, Erik Jones was 18th and Kyle Busch was 26th. John Wes Townley landed a 33rd place run while Chad Boat was the final infiltrator who posted a 36th place run.

The XFINITY era of NASCAR’s AAA series kicked off in less-than-auspicious style on Saturday with a race that saw the winningest driver in the history of the series hauled off on a gurney. Half of the field suffered significant damage in two large wrecks that occurred after 2/3 of the race was run caution free. A first-time winner put a happy glow over the finish but the fact that a driver was injured due to a lack of SAFER barriers points out that there are still many improvements needed in the sport.

Ryan Reed winning a national touring series race with Type 1 diabetes is a great story and will hopefully bring a whole new light to the sport. The presence of a new title sponsor, who has made a 10-year commitment to the sport, is a huge coup for the sanctioning body and is hopefully a positive omen for the next decade.

“It was a solid day. The Rheem Chevy was fast. The guys did a heck of a job fixing the damage. I thought we had a shot th lre. I don’t know what happened there at the end, it didn’t go as planned. I thought we had a running mate. It is part of it. We’ll take this Rheem Chevy back home. I’m just looking forward to running it all year for the 20 races we’ve got.” –Austin Dillon on coming home in fourth with a damaged race car

“Yeah, I needed a partner there at the end. Our car was damaged. I thought ‘maybe if he pushes me we’ll have a shot.’ The 16 had a HELL of a run down the backstretch. It would have been hard to catch him but we might have had a shot. Oh well, we’ll go on from it…After they fixed your car was the damaged it was hindered trying to move to the front. It definitely had damage and I needed a little help but I could still push good. The guys did a good job making a good day out of it.” –Austin Dillon on the importance of a drafting partner

“You’ve always got to have a little help here to get to the front. We had a run and poked to the top and everybody dumped me. So that kind of didn’t go our way. Put us behind from fourth but all in all third is still good. We battled hard. We had an awesome race car I’m just excited about what we’re going to continue to bring to the race track.”  –Ty Dillon on being very fast early in the race and then needing help to get to the front later in the event.

“You’ve just got to be smart, put yourself in the right position, I know the front is where you have to be in order to miss them. I missed the first couple. Then, when you get stuck in the middle you just have to find a way to the back and let it happen. It was a good day for us. This is the focus and intensity we’re going to have for the rest of the year and hopefully win the championship.” –Ty Dillon on missing several incidents

“There are runs you can block and runs you can’t. The 16 and the 60 had a run that wasn’t blockable. They did a great job and it paid off for them…I was lucky enough to miss the wrecks, which was great, but not lucky enough to close it out at the end.” –Brad Keselowski on getting passed on the final lap

Crickets again for Kyle Larson causing a big one (the talking heads blaming Daniel S). He has been in 3 races so far and 2 of them he caused wrecks.