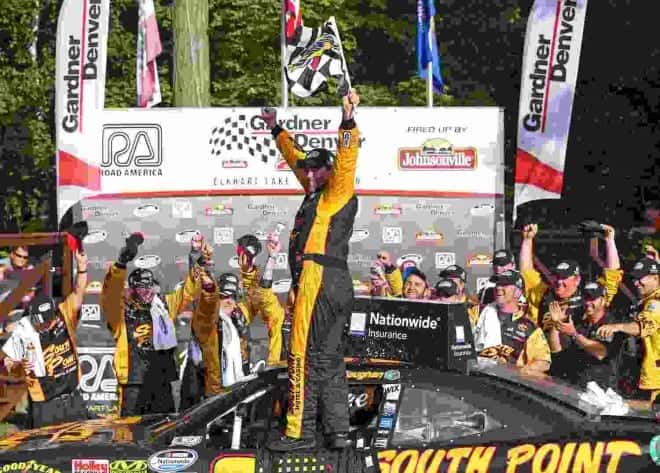 Brendan Gaughan has never been one to mince his words – see the Truck Series finale at Homestead-Miami Speedway in 2003. Nor does he provide excuses either – there’s something charming about Gaughan admitting in interviews that he sucked or screwed up, in those exact words. The Las Vegas native will tell you flat out that he’s here to win races and perform for Richard Childress Racing. The day that he can’t, he’ll happily take his helmet and go back to the South Point Casino. Gaughan has always been open and honest, as also a competitive spitfire and entertaining personality outside the cockpit. Simply put: Brendan Gaughan is someone who everyone loves and can easily root for.

It was 10 years ago when he won his last NASCAR race, in Texas, and he seemed that same person this past Saturday when he emotionally reemerged. His victory at Road America in the Gardner Denver 200, was his first career Nationwide Series win in 98 attempts. The floodgates opened for Gaughan because of not only the time that had lapsed, but the dedication of his season to his grandfather John “Jackie” Gaughan, who passed away a few months ago. It also opened the often-jaded hearts to those of us watching because it seemed everyone had some form of congratulations to send “Uncle Brenny” as he’s lovingly called. It was not only well deserved – and you must admit you were happy for him on Saturday, perhaps not only because he was a new winner, but the way in which he did it, by coming back twice from mistakes that should have done him in – but because it has been a long time coming.

By now, we all know Gaughan and most likely his story. For those who don’t, here’s your chance to catch up on it, and I promise it’s a good one. It started when a brash young talent tore up the Truck Series circuit. Gaughan won races and owned Texas Motor Speedway with four of his eight career wins coming in the Lone Star state. He was on his way straight to the top and he just about earned a truck title before doing so. The aforementioned Homestead finale was the beginning of the end, until Richard Childress came along.

Back then, Gaughan did go to the top – right to Sprint Cup with Penske for a year, and it didn’t work. Back to Trucks he went and his support system never wavered. As the years began to carry on and Gaughan went through every possible situation in racing, he became the people’s driver – true testament to the connection he’s made with peers, fans and media alike, because every driver knows how crowded their corners get when things are going well, along with how quiet it becomes and you’re suddenly forgotten when the storyline changes. Not for Brendan Gaughan.

The scenery might have been the same but his return to Trucks was less than celebratory, in more ways than one. The years of watching him try to carry the equipment underneath him were trying for the driver yet helped grow more of a fondness and affection towards the now 39-year-old. That was back when he didn’t have a backup truck in his corner, practice was painful, and racing was anything but competitive. I have come to believe, after being told so many times, that good things come to those who wait, and good things happen to good people. How can that not be true for Gaughan?

He’s finally found the good years of his career, or at least rekindled the ones from back when he was driving for the family team, winning races and competing for championships, or the complete opposite of the years he battled with Tom Mitchell or Rusty Wallace. The opposite of a few Truck races here (2013) or some Nationwide starts there (2012 and 2013). So Saturday when Gaughan didn’t know whether to laugh, cry, or what to say, it was genuine. It’s authentic when it seems he is just too far over the moon to really be as happy as he is. If you find yourself getting just as jacked up when he’s telling stories or simply giving an interview, embrace it because it’s real.

Right here and right now thanks to Richard Childress, Gaughan is having the time of his life. He knows what he has at his disposal and it’s about time he stood up and delivered. But Gaughan wasn’t the only winner Saturday. The breath of fresh air he gave us all was long overdue and much needed. He provided a week to forget about all the negatives we constantly harp on when it comes to the Nationwide Series. A week to enjoy the great racing that was displayed and a fantastic duel to the end that couldn’t have ended with a better guy in victory lane. We all won because for as happy as Gaughan is to be here, we are just as happy to have him.