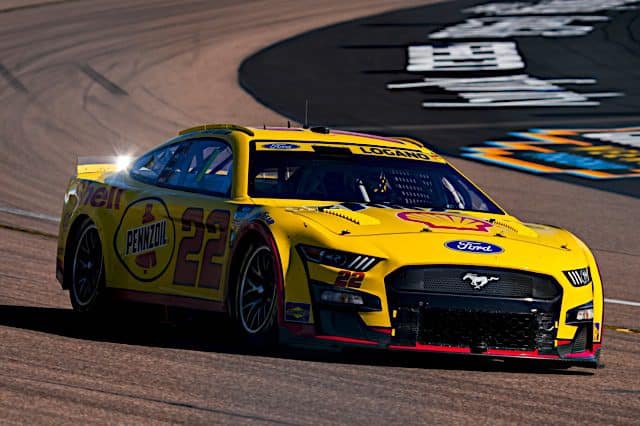 Joey Logano dominated early and late at Phoenix Raceway Sunday (Nov. 6), returning out front in the final sprint to the checkered flag to score the win and his second NASCAR Cup Series championship in the process.

Though he faced challenges from fellow Championship 4 drivers Christopher Bell, Ross Chastain and Chase Elliott throughout the event, as well as Team Penske stablemate Ryan Blaney, Logano managed a half-second gap over the No. 12 during the final few laps to claim the victory and title.

The win was Logano’s fourth of the 2022 season and the 2018 champion bookended the year with wins, kicking things off with a triumph in the Busch Light Clash at the Coliseum and finishing it off with his third Phoenix win.

"I never been truly this ready for a championship race and we did it."@joeylogano was all smiles after winning the @NASCAR Cup Series Championship. pic.twitter.com/2HAmcEYYSA

“We did it!” Logano yelled to start his post-race interview. “We’re champions again! Yes! Oh my god, I’m so excited. Thank you to everybody — my team, you guys are amazing, gave me a good race car, good pit stop there at the end to get us up to the front. Boy, that was intense there at the end. It’s all about championships, that’s what it’s all about. We worked so hard the last couple of weeks trying to put ourselves in position.

“Everything that happened in 2020, I knew we just wanted to have a solid run and do this today. I can’t thank Ford and Shell/Pennzoil enough for supporting me over the last 10 years, getting us a couple of championships together, all our partners at Team Penske, everybody that works on these cars. It’s such a big deal to win these championships, impacts so many people’s lives.”

Logano, who drove for Joe Gibbs Racing during his rise to the Cup Series, also paid tribute to JGR co-owner, vice chairman and COO Coy Gibbs, who passed away the night prior.

“Obviously, the news this morning with Coy, too,” Logano said. “I don’t know what to think, but obviously my condolences go to the Gibbs family. Just the incredible day for us. Kind of mixed emotions at the moment.”

Chastain finished third, unable to close the gap after the final restart, while Bell came home 10th after a slow final pit stop dropped him back through the field.

Polesitter Logano dominated from the green flag, leading every lap of stage one en route to the segment victory. All four Championship 4 drivers were in the top 15 by lap 21, with Chastain making his way up from starting 25th.

The uneventful first stage led to Logano keeping the lead on a pit cycle, after which Bell passed Elliott for position before the first caution flew for an incident on lap 85.

Landon Cassill spun off turn 2, sliding back into the path of Ricky Stenhouse Jr. and both cars ended up damaged from the contact.

Landon Cassill gets loose coming off of turn two and hits the wall, leading to contact with Ricky Stenhouse Jr.

On the ensuing round of stops, Cole Custer stayed out and Erik Jones was first off pit road with two tires while Logano won the four-tire race.

The No. 22 shot back out to the lead rather quickly while Elliott’s bad stop dropped him back in the field. Bell got loose while battling for position and he fell back outside the top 10.

Logano and Chastain, meanwhile, were dealing with fuel-mileage strategy, and both were forced to stretch to the end of the stage. Chastain was told by his crew to not shift for five laps in order to save, a strategy he continued using and lost track position as a result — including to Bell, who made his way back into the top 10 around lap 144.

At this point, Logano, Chastain and Bell were all in fuel-saving mode while Elliott pitted early. Bell eventually scooted by Chastain while Blaney battled with the No. 22 for the top spot.

Blaney passed Logano on lap 159, putting up blistering laps, and Elliott’s strategy paid off as he unlapped himself from his pit stop.

It appeared Blaney ran out of fuel halfway through the final lap of stage two, but he was able to manage the car to the green-and-white-checkered flag and complete a Penske sweep of the stages.

Blaney retained the top spot early in the final stage while both Logano and Bell faded back during pit stops. But a quick yellow for a crash, this one involving Tyler Reddick and Michael McDowell spinning on the frontstretch, set up another restart.

It also led to another quick caution that changed the complexion of the Championship 4.

As the field dove down into the dogleg, heading to the first corner, contact between Elliott and Chastain sent the former sliding into the inside wall, pancaking it on the passenger side. Chatter on the radio seemed to indicate toe link issues, but a visit to pit road got Elliott back out on track just one lap down.

Ross Chastain got into him! #Championship4

However, once the race restarted, Elliott reported the car still had issues. He approached Chastain on the track but elected not to exact any payback as he was lapped.

Elliott deferred speaking about the incident after the race, saying, “Just proud of my team and the effort that they put in and the fight that we had for these last nine weeks.”

With 75 laps remaining in the season, Logano ran third, Chastain sixth, Bell seventh and Elliott 30th. Bell, at one point, radioed that he thought his car was blowing up despite the team not observing anything obvious about the No. 20.

Bell then started to close in on Chastain with 65 to go, finding pace. He then pitted before any of the other Championship 4 competitors, the motor issue seeming to have sorted itself out. This pulled Chastain into pit road as well, but while the No. 20 had a clean stop, Chastain’s crew had issues on the right-rear tire.

Logano followed soon after without issue, and Bell gained to within a couple tenths from an initial 2.5-second gap once the cycle began.

He then hounded Logano for several laps, diving to the bottom on lap 257 and nearly pulling alongside the No. 22. A close call as Cody Ware ran high nearly put Bell into the wall, but he settled in behind Logano for the moment.

Behind them, Elliott made another pit stop, dropping him three laps behind the leaders and far out of contention.

Spring Phoenix winner Chase Briscoe then made his presence known during the second half as well, running second. Another caution flew, this one for the returning Alex Bowman as he spun and hit the backstretch wall in crew chief Greg Ives’ final race. The contact came from McDowell exiting turn 2 wide, slamming into the No. 48.

The 6th caution of the day comes out after Michael McDowell gets into Alex Bowman.

On what turned out to be the final pit stops, Bell’s team had a horrific, nearly 20-second stop while Briscoe took the lead. The rear tire changer’s finger was reportedly caught in the left-rear tire while the team executed the stop. Adam Stevens later explained the issue to Frontstretch as the jackman Caleb Derks was further evaluated by medical personnel.

Christopher Bell drops out of the top ten with this pit stop. #NASCAR

The caution period was extended by a fire under Brad Keselowski‘s No. 6, ignited by the buildup of rubber underneath the car.

On the restart with 33 laps remaining, Briscoe and Blaney battled for the lead while Logano got a run under his teammate for the second spot. Chastain battled with Kevin Harvick for fifth several hundred feet back.

Blaney fought back, and behind him Chastain made a daring move to take fourth. Logano, meanwhile, cleared Briscoe with 29 laps remaining.

With 20 laps to go, Chastain was looking to pass Briscoe for third, 2.5 seconds back of Logano, while Blaney had run down his teammate. Bell ran in 10th, only several spots up from where he restarted.

Chastain started picking up time, chopping the lead to under two seconds with 10 to go, but neither he nor Blaney could catch Logano, who sailed to the win and championship. Blaney came up just short of becoming the 20th different winner of the 2022 season.

Logano’s wife Brittany and son Hudson joined him in the celebration.

“No,” Logano responded simply after he was asked about any doubt the team had going into Phoenix. “I knew going into this thing that we were going to win the championship. I told the guys we were the favorite from Daytona, and we truly believed it and that was the difference.

“It’s like I said, I had a good team with a bunch of confidence, and we had all the reasons in the world to be confident. I said, ‘I’ve never been truly this ready for a championship race.’ And we did it.”

ABC. Anyone but Chase!

A good day for someone who learned the hard way. And my favorite driver. Take no prisoners

When Elliott asked if he had done anything wrong his spotter should have said, “Yeah! You expected the 1 to back off and let you in! You got what you deserved.” That’s what everyone watching saw. He did it to himself. Again!