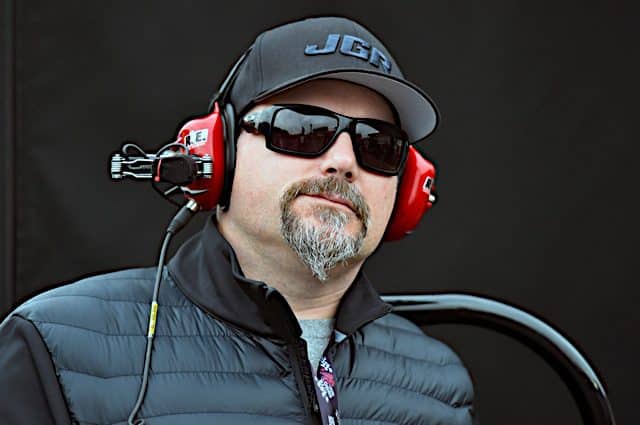 After Joe Gibbs Racing announced Sunday (Nov. 6) ahead of the NASCAR Cup Series’ championship race at Phoenix Raceway that the team’s co-owner, Vice Chairman and COO Coy Gibbs, had passed away, an outpouring of condolences and support came flooding in from the NASCAR community.

Coy Gibbs was the son of team owner Joe Gibbs and a former driver in NASCAR’s national touring series.

His nephew Jackson elected to remain the front tire changer for Christopher Bell‘s championship-contending No. 20 team, albeit with a couple pieces of tape on the back and a tribute written on them.

It is with great sorrow that Joe Gibbs Racing confirms that Coy Gibbs (co-owner) went to be with the Lord in his sleep last night. The family appreciates all the thoughts and prayers and asks for privacy at this time.

Prior to the race, the NBC broadcast reacted to Gibbs’ passing with both an in-memoriam graphic and a moment of silence during pre-race ceremonies. Hosts Marty Snider, Kyle Petty, Dale Jarrett and Brad Daugherty all discussed the tragedy on-air while NASCAR chairman Jim France made a statement as well.

The racing world reacts to the unfortunate news of Coy Gibbs’ passing.

Gibbs, father of Ty Gibbs, died at the age of 49. pic.twitter.com/AO3Capy3Io

A moment of silence in honor of Coy Gibbs is held at Phoenix Raceway. pic.twitter.com/OeXHBMG71O

#NASCAR Chairman Jim France
“We are heartbroken by the tragic loss of Coy Gibbs. On behalf of the France Family and all of NASCAR, I extend my deepest condolences to Joe, Pat, Heather, the Gibbs family and everyone at Joe Gibbs Racing on the loss of Coy, a true friend and racer”

JGR drivers were visibly emotional on pit road prior to the race, and the longest-tenured pair at the team, Denny Hamlin and Kyle Busch, both tweeted in response to the news.

Heart breaking news about loss of Coy Gibbs last night in his sleep. Seeing @JoeGibbsRacing drivers crying on grid pre race is hard. The #NASCAR family pulls together in times like this. So hard to understand such a tragedy ..thinking of Joe Gibbs and Ty Gibbs at this time. pic.twitter.com/YQJzIG95yS

Today we will do what we don’t want to do, but we we will unite as a family and race for the name on our chest. @JoeGibbsRacing

The entire NBC broadcasting booth — Dale Earnhardt Jr., Rick Allen and Jeff Burton, as well as the absent Steve Letarte, all extended their condolences, as did both Brad and Brian Keselowski.

My heart and prayers are with the Gibbs family today.

Other reactions came via Super Bowl champion quarterback Joe Theismann, who played under Joe Gibbs during his first tenure as head coach of the then-Washington Redskins. Coy Gibbs served as an assistant coach during his dad’s second stint at Washington’s helm.

So sad to hear about the passing of Coach Gibbs son Coy. Robin and I send our thoughts and prayers to Coach and Pat and the family.

Coy Gibbs was always friendly to me. Often when there was something controversial or sensitive or personnel related, Coy would say he couldn't talk to me b/c he would have to lie when answering some of the questions and he didn't want to lie to me. He said it with a grin. RIP.

After the race, Joey Logano paid tribute to Coy Gibbs in his championship-winning interview, and Busch elaborated on who Gibbs was as a person.

“[Coy] was a lot like me,” Busch said to media members afterward. “He didn’t take any bullshit and told everybody the way it was straight to their face. Loved Coy for that and for his tenacity. He took on a huge role in filling the shoes of his brother, maybe a little more on the competition side than the business side in that respect […] [tried] to push us all to go forward and to win races and be competitive and be strong, all that. Honestly, that’s what I’ll remember most about him.

“The majority of my thoughts and prayers are with Joe and his family, everybody else — [Coy’s wife] Heather, [J.D. Gibbs’ wife] Melissa, all of them.”

Bell came up short of the championship, but reflected on what Gibbs meant to the team in his interview as well.

“Your world comes crashing down,” he said on pit road after the race. “Whenever you get news like that, it definitely puts it in perspective that there’s more to this outside of racing. The whole Gibbs family is in all of our prayers. Thinking of them […] incredibly saddened by the news today.”

Bell’s crew chief Adam Stevens, involved with Joe Gibbs Racing for well over a decade in multiple capacities  — primarily as a crew chief in Cup since 2015, winning two titles with Busch — discussed his thoughts after the race.

“It was beyond a shock,” he told Frontstretch. “Not a single one of us had a chance to process it. It was just ‘get through the day, just support each other,’ was the message.”

“He went from the highest of highs to the lowest of lows. He’s gonna need a lot of people to love on him, and I’m gonna be one of them.”