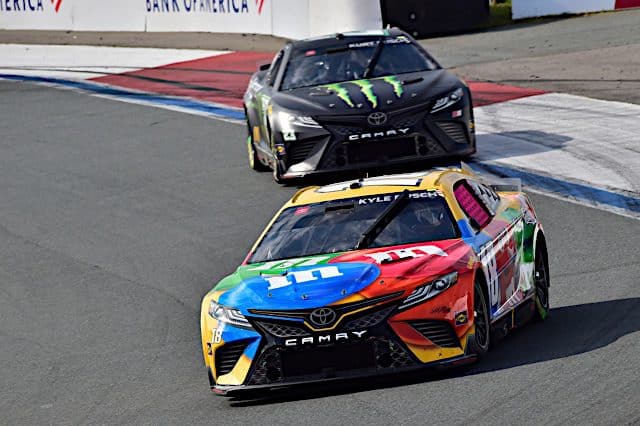 It sounds far-fetched considering the success and history of Joe Gibbs Racing, but it’s certainly a possibility.

Kurt Busch dominated at Kansas Speedway with 23XI in May, while Bubba Wallace followed it up at Kansas in September with the second Cup win of his career. 23XI has shown tremendous growth in its second season, and the team has several big-name sponsors lining up to sponsor its cars. Busch will likely keep working with 23XI in the garage, and with Tyler Reddick joining the team in 2023, things are only looking up.

As for JGR, Christopher Bell’s win last weekend at Martinsville Speedway was the 200th Cup win in the team’s history, an incredible accomplishment. But JGR’s big win was mostly overshadowed by the finish of the NASCAR Xfinity Series race the day before.

Team orders have drawn controversy in the playoffs, with the biggest example being Cole Custer and Chase Briscoe at the Charlotte Motor Speedway ROVAL. Ty Gibbs wasn’t concerned with team orders at Martinsville; he wanted a grandfather clock. But in order to do it, he dumped his teammate out of the win and the championship on the final lap.

JGR owner Joe Gibbs and co. can say they are handling the situation with Ty Gibbs internally, but it’s yet another controversial incident that he has been involved in this season. It’s one thing to dump someone out of the win, but it’s even worse when it’s your teammate. Gibbs can keep apologizing for incidents, but the apologies grow hollow when they keep happening. And in a team that will need to replace Martin Truex Jr. and Denny Hamlin in a few years’ time, getting dumped by the team owner’s grandson is not a good message to send in attracting free agents.

Gibbs seems likely to move up to Cup in the No. 18 next season, and whether it was because of Gibbs, sponsorship or contract expenses, JGR has had an ugly, unceremonious end with its winningest driver, Kyle Busch. Sponsorship appeared to be the biggest crutch, but Richard Childress Racing was easily able to hire Busch and make it work for 2023. In addition, JGR will likely have to deal with finding new sponsors once Truex decides to call it a career. There’s also the outside possibility that Hamlin decides to move over to his own team in a few seasons.

JGR will continue to be Toyota’s flagship team for the foreseeable future, but there are several questions regarding the team’s future. On the other hand, 23XI looks to be set and will expand in the future. Unless these questions for JGR can be resolved, 23XI has a window.

Three races, three champions. Who will win it all?

It’s the final week of the NASCAR season, and three national series champions will be crowned in the next three days. It’s going to be a weekend of incredible battles, with no overwhelming favorite.

Ben Rhodes? He won the NASCAR Camping World Truck Series championship at Phoenix Raceway last year. Zane Smith? He’s finished runner-up in the championship at Phoenix for the last two seasons. Chandler Smith? He won the pole and the race at Phoenix last season. Ty Majeski? Dominated the most recent race at Homestead-Miami Speedway and he has been red hot in the recent run of short tracks at Lucas Oil Indianapolis Raceway Park, Richmond Raceway and Bristol Motor Speedway. It’s likely that the No. 66 team will bring a similar piece for Friday night.

With the amount of success that all four drivers have had at Phoenix, picking a name out of a hat might as well be the best way to predict a Truck champion. That said, Majeski has had the hot hand during the playoffs. He’s my pick to win it all.

For the Xfinity race, Noah Gragson will be the favorite. He’s been great in the second half of the season, with five wins in the last nine races. He also won at Phoenix in March after leading 114 laps. But if anyone will keep him in check, it’s teammate Justin Allgaier. Allgaier is a two-time winner at Phoenix, and he is hungry to capture an elusive first title. And while Allgaier hasn’t shown the same firepower that Gragson has this season, he too has been fast with several dominant races in 2022.

Gibbs has also had a great season, but it’s Gibbs vs. three JR Motorsports cars, and Gibbs put a target on his back after dumping Jones at Martinsville. He certainly has the speed to win, but he will have to clear some difficult hurdles. As for Josh Berry, he too has had an impressive season, but he has not made much noise at Phoenix in the past. Anything can happen, though.

Given their respective seasons, Phoenix will likely be a race-long battle between Allgaier and Gragson, with Gragson prevailing in the end.

For the Cup race, Chase Elliott won the regular-season championship this season and he clinched his first Cup championship at Phoenix in 2020. Even with only three top 10s in the first nine races of the playoffs, he can never be counted out at this track. Joey Logano didn’t win his 2018 title at Phoenix, but he too has had success at the track in the past. He’s a two-time winner in the Arizona desert, and he was the biggest challenger to Elliott in the 2020 finale.

The biggest story heading into this weekend was Ross Chastain’s Hail Melon at Martinsville to knock Hamlin out of the Championship 4. Chastain finished second at Phoenix in March, and with a sensational moment to make it into the finale, the No. 1 team will have all the momentum in the world. The final driver is Bell, and while he hasn’t had the same success that the other three have had in Phoenix, he has been clutch in the playoffs with two wins in two must-win races. Lightning can easily strike thrice.

Elliott has been the dominant driver of 2022 and he has the most impressive resume at Phoenix. No reason to believe that the No. 9 team won’t show up on Sunday.

Kyle Busch, Tyler Reddick and Ty Dillon are racing with their respective Cup teams for the final time. Who will have the best sendoff?

Not every ride has been announced for the 2023 season, but the Cup Series goes into Phoenix knowing that three drivers will say goodbye to their respective teams: Busch at JGR, Reddick at RCR and Ty Dillon at Petty GMS.

Reddick will likely have the best performance on speed. He finished third at Phoenix in March, and with no RCR cars in the finale, the chances of him making noise in the top 10 are pretty high. On the other hand, Busch has mostly sputtered in the second half of the season despite three top 10s in a row before a disastrous race at Martinsville. Mars will look to have a great farewell race for its 20-plus years in NASCAR, but JGR will be all in on prepping the No. 20 car for the championship. As for Dillon, he has scored one top 10 all season.

Reddick will be the favorite to have the best finish of pace, but auto racing doesn’t always work that way; consistency and finishing races have been a struggle for the No. 8 team all year. Crashes, mechanical failures, pit road penalties and split pit strategy will all play a role, but if Reddick can make it to the finish in one piece, he will likely have the best finish after 312 laps.

Should Phoenix be the title race?

Phoenix will return as the NASCAR finale for the fourth straight year in 2023, but its status as NASCAR’s championship weekend has drawn some criticism. The racing at Homestead-Miami Speedway was lauded while Phoenix has had critics in regard to subpar racing.

2023 will be year 10 of the elimination playoff format, and the win-and-you’re-in system has been criticized. While having more than one race decide the champion would provide a fairer result, the elimination format won’t be going anywhere for the foreseeable future.

And if the championship is going to come down to race No. 36, NASCAR should alternate venues for its championship weekend.

The problem with having the championship at the same track annually – whether it was at Homestead or Phoenix – is that drivers with success at a particular track will have an advantage over the rest of their competition. A driver could have a historic 15-win season, but if they’re not good at Phoenix, they are already behind the 8-ball before the green flag waves. A rotating finale wouldn’t be a perfect fix to this problem, but it would reduce driver advantages that occur from the same track every year.

After all these seasons still only 2 teams. The more relevant question could be “ will Toyota continue?”

I think you are on to something about 23II being the flagship Toyota team. The manufacturer is very sensitive to image. It would take some big investment but could happen.

With an 81-year old Joe Gibbs at the helm, big changes at JGR are coming if they are ready, or not. There have been rumblings that heir-apparent, Coy Gibbs might not be up to the task of running JGR organization properly. Two of the four remaining drivers, Hamlin and Truex, are at the end stages of their driving careers. The inability to find a sponsor replacement for Mars (M&M’s), even with over a year’s notice is troubling. Also, losing a 2-time champion in Kyle Busch is a major blow. The loss of KBM has sent some prospects in Toyota’s driver development program off to competitors next year. With the spec car, many advantages that JGR used to have in terms of car build and prep have been neutralized.

Given all this, I think Toyota is taking a hard look at their 2 teams (3 if you count David Gilliand’s Truck team) and trying to find the best way forward. That might be making 23XI their top team, or keep JGR at the top of the food chain, or possibly pulling out of NASCAR. Now, if Bell wins this Sunday it will paper over these problems for a while, but rest assured these issues will be coming back to haunt Toyota very soon.

Given the terrible news regarding Coy Gibbs this past weekend, it’s plausible that 23XI is the long term play. With Reddick coming over, and up to the Wallace/Larson incident, Wallace having the 4th best avg finish in the Cup Series over the prior 3.5 months, it would make sense. TRD President David Wilson has repeatedly been on NASCAR Radio with nothing to indicate any loss of interest. I think there’s near zero chance of them pulling out. They have, by design, always had the strategy of a smaller footprint. A changing of the guard doesn’t mean a move away. The big Toyota money & driver development would be tempting to a number of teams, not to mention TRD’s controlled sponsorships. Do you think Trackhouse wants to be 3rd on the Chevy food chain long term? Trackhouse has already indicted the desire to be a larger team at some point. How about GMS/Petty? Teams 3rd in the OEM pecking order aren’t going to wait forever, and money talks. As for the car, minus Trackhouse, did the top teams stop being the top teams this year? The numbers would say no. The financial resources of the top teams hasn’t gone away. Look for those teams to continue to have success as they learn the car faster. Rest assure, the dopey anti-Toyota sentiment that exists in part of the fan base isn’t shared in the garage among actual business people.

Who comes up with these stupid questions? There’s a lot more pertinent questions to be asked.