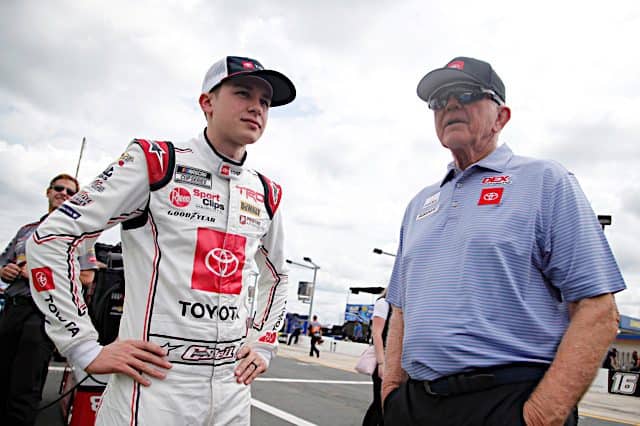 Did You Notice? … Joe Gibbs Racing has been a fascinating team in transition throughout the 2022 NASCAR Cup Series season?

Kyle Busch could only look on as sponsorship deals failed to materialize before he was tossed to the side in favor of a cheaper, younger talent: Ty Gibbs. Martin Truex Jr. went through a year that’s featured more bad luck than perhaps any in recent history, missing the playoffs despite a season where he’d sit seventh in points without a postseason reset. Denny Hamlin had the worst start of his career only to rebound in the playoffs, positioning himself to advance before Ross Chastain pulled a legendary move to knock him out at Martinsville Speedway.

Into the void, as chaos rained down around him, stepped Christopher Bell.

Bell isn’t getting proper coverage this week because of Chastain’s once-in-a-generation moment that launched him into the title chase. He’s also spent his time in Cup under the radar, mostly drama-free aside from an incident at Watkins Glen International last August with dirt rival Kyle Larson. We learned two things from that dust-up: that you better call Bell, not text him, when you wreck him by mistake, and that he’s a private person who doesn’t want conflicts to play out in front of the media.

No one has the right to tell an athlete how to live their life in the spotlight; but in an age of social media, where everything feels public, traits like quiet, nice and toiling outside the limelight limit the growth of your fanbase. Bell has just 84,000 followers on Twitter while each of his other JGR teammates in Cup, by comparison, have at least half a million.

Is that dynamic about to change? In the course of nine weeks, Bell stepped up in the playoffs and delivered with his back against the wall. He’s the first driver ever in this format to win when facing playoff elimination twice. In the closing laps at Martinsville, it was 41-year-old teammate Hamlin who was forced to play it safe, trying to make it in on points while Bell first ran down, then passed Chase Briscoe from 1.5 seconds behind to win a race where passing was deemed impossible.

Bell did it starting 20th and driving the No. 20 Toyota, the runt of the JGR litter since Matt Kenseth left the program after the 2017 season. The team had been suffering for years before that, never fully recovering from a 2015 incident where Kenseth got spun by Joey Logano during the playoffs, ruining a season in which he won five races and was arguably the favorite to take the title. An intentional wreck at Martinsville led to a two-race suspension for Kenseth; he won just three races the rest of his tenure. From 2018-20, replacement Erik Jones won just twice.

It looked like Bell was headed the same way, 29th in points after the first five races this year. He remained winless, squarely on the playoff bubble spot following the July 2022 race at Atlanta Motor Speedway. The next week, Bell was a surprise winner at New Hampshire Motor Speedway, his first career Cup win on an oval, and it was like a shot of adrenaline that helped him figure something out.

From that point on, Bell and crew chief Adam Stevens have found something special.

Take a look at the most points accumulated since then.

This group of five had the edge (no one else was above 500 points), and Bell delivered across the board. He’s had more wins than anyone during this stretch, is virtually tied in laps led with Logano and powered through with the most top-five results. Add in the pressure behind each of those performances, and it’s clear the 27-year-old held his own.

“The sport is all about people,” Bell kept saying after the win Sunday (Oct. 30). “Fortunately, for me, I ended up with the best people around me.”

It’s easy to forget how Bell lit NASCAR’s two lower divisions on fire, earning 20 race wins in them from 2017-19 along with a Camping World Truck Series championship. A weird COVID-19 year running for the now-defunct No. 95 Leavine Family Racing team stunted his Cup development in 2020; a lack of practice time in 2021 kept him behind the curve. But as the world returned to normal, Bell and Stevens, the only active two-time championship crew chief, found a rhythm that’s put them in position to capitalize amidst a topsy-turvy playoff.

Compare that to the other end of the spectrum. As Hamlin and Bell led 353 of 500 laps at Martinsville, Busch spent much of the day running dead last. Imagine that: a two-time Cup champion for this organization, winner of 56 Cup races together, finishing six laps down behind teams like Rick Ware Racing and Spire Motorsports. Busch did it with a substitute crew chief, Seth Chavka, with Ben Beshore sidelined due to a wheel that came off at Las Vegas Motor Speedway.

Busch started the playoffs with three DNFs in the first four races, including two blown engines. After one of those mechanical failures came following a race-high 155 laps led in the Southern 500, he has led just one additional playoff race: three laps at Talladega Superspeedway in October. Barring a Hail Mary at Phoenix Raceway this weekend, the 37-year-old will finish with a career low in top fives (eight) while tying a career high in DNFs (also eight) since entering Cup full time in 2005.

As the free agency saga unfolded, one that ended with Busch landing at Richard Childress Racing, the bitterness of poor performances out the door has set in. Busch has liked a few social media posts openly complaining about the way he was kicked out of the seat in favor of Gibbs’ grandson. Busch has been open during USA Network’s Race For The Championship about how he never expected to be in a position where he’d be sent packing at JGR.

“Over this last year, it’s really been hard on both sides,” owner Joe Gibbs admitted Tuesday (Nov. 1). “We tried extremely hard to get everything put together so we could stay together, and we just weren’t able to get that done, and so that was a lot of work, stress, trying to go through that.

“This has really been a tough year, I think for him and us. So we hate that.”

Busch’s debacle came on the same weekend Ty Gibbs flat-out dumped NASCAR Xfinity Series teammate Brandon Jones into the outside wall to win, then claimed, “Jesus was hated first and among the people,” in an interview responding to boos from the crowd. You’ve got to wonder what Busch must be thinking this week, seeing the controversy around Gibbs with no clear solution and NASCAR choosing not to step in.

It also came after Hamlin’s strong comeback in the season’s second half fell short, leaving him title-less at age 41 with other responsibilities increasing (like running a rival Toyota Cup organization). He’s next on the list in terms of sponsor renewal; will longtime backer FedEx keep going where Mars, Incorporated bailed on Busch?

And then there’s Truex, already seeming to be heading toward retirement after 2023. He suffered through a season in which he could have easily picked up four wins but wound up with just four top-five finishes, the lowest total for any JGR Cup driver since Daniel Suarez in 2018.

It’s clear a long-term transition is underway at JGR. But Bell provides hope that, no matter what happens with Hamlin and Truex, Gibbs will have a “good-guy foil” capable of winning titles for the organization. He’ll follow in the tradition of Bobby Labonte for Tony Stewart, then Kenseth for Kyle Busch after Logano ultimately didn’t work out over there.

Even if Gibbs becomes a generational talent, JGR should be counting their lucky stars for Bell’s presence. It feels like he’s the only guarantee they have right now for 2024 and beyond.

Kyle learned late in life that he was no longer the darling of the MARS family heir sisters, you’re are suddenly and quickly homeless. JESUS JOE and when alive JD, will milk you dry and then spit you out. No matter who you are! Nasty bunch. Marty is next, and then FEDEX goes so is Hamlin.

Mars pulled out of sponsoring within NASCAR & JGR, they didn’t cancel KB. They are going in a different way with marketing money. Allot of the big companies do over time. JGR quit on KB for the grandson, I guess we’ll see how it all turns out. Sometimes new stars re-energize, and KB’s determination could produce allot of wins next year.

be interesting to see how they treat truex next year, since that’s his last year with the organization. denny has the same issue every year when it comes to winning championship. just can’t close the deal. i do believe he’ll be like mark martin. however, i think martin was more likeable.

What’s with journalists questioning Bowman’s return, as if they are doctors skilled in concussion injuries and recovery? He was given the medical go-ahead. He’s a racer and racers want to race. Mind your own business.

Kyle’s total radio silence was a kiss my a.. Joe Gibbs moment. Like him or not, Kyle’s way has made him a lot of money. I guarantee you he will not be racing for the win next week. Wouldn’t surprise me if he put it in the wall and ends his Gibbs career early. Mars decision had nothing to do with Kyle. They are a smart corporation and decided nascar is not the smart place to put their money.

Tom B
Reply to  Echo

What I see at JGR is if your not returning to the team next season you are getting cast aside. Kyle’s car has not been competitive. He was 6 laps down without an accident. Brandon Jones was eliminated from the Championship 4 so Ty could get a Martinsville Grandfather Clock. So much for team spirit.

Echo
Reply to  Tom B

I agree with you on all that too. And I think Kyle knows it and is in a let’s get this over with mode. I wonder if deep inside, Truex might reconsider racing another year because he’s smart enough to see what’s happening. Wonder if he has an out clause in his contract.