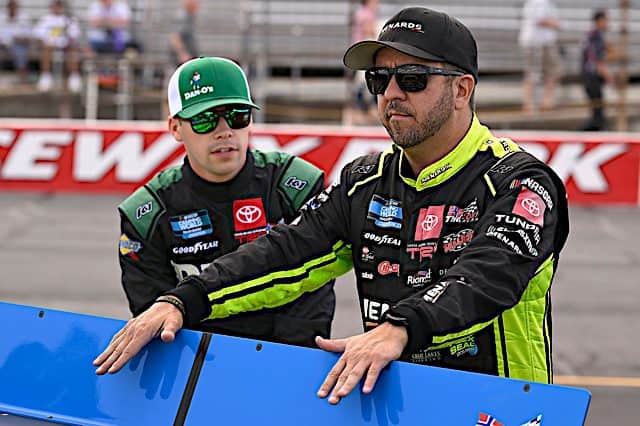 Ty Majeski made a major statement, snagging two wins in the three races during the Round of 8 at Bristol Motor Speedway and Homestead. Meanwhile, Chandler Smith and Zane Smith, both of whom entered last weekend’s race with a decent cushion over the cut line, were able to point their way into the championship race with little fanfare by finishing 10th and second, respectively.

It’s at this point, though, where the battle for that fourth and final spot got a little more interesting. Early in the race, John Hunter Nemechek pretty much took himself out of contention when he smacked the wall with a flat right front tire and was forced to make an unscheduled pit stop under green. His elimination from the equation became much clearer just a few laps later when the damage forced another stop after he suffered a flat right rear.

Similar to Nemechek, Grant Enfinger suffered a flat tire around midway through the final stage, and the damage was enough to take him out of the battle as well. But what was a bit different for Enfinger was that he was in a must-win situation, needing a lot to go wrong for the other playoff drivers (and right for his team) for him to point his way into the Championship 4. If not for the damage he suffered, who knows what might have been.

Enfinger: "We've got everything to win and nothing to lose." Don't be surprised to see him put it all on the line today. #NASCAR

That ultimately left ThorSport Racing teammates Christian Eckes and Ben Rhodes, along with Stewart Friesen, to battle it out for the one final spot, and the driver above the cut line as the field ran shuffled numerous times throughout stage three. Each driver scored points in stages one and two, but since Friesen and Rhodes earned five and six points more than Eckes, respectively, the battle really came down to those two, barring an accident or mechanical failure.

As Rhodes struggled with an ill-handling truck through much of stage three, Friesen had plenty of speed and did as much as he could to put himself in a position to advance. He moved all the way up to third by the end of the race, but the margin created by a round of green-flag pit stops was too much for him to overcome to move any further up the running order.

With each position Friesen clicked off, the margin at the cut line changed, but it remained within one to two points and even at some moments, tied, with Rhodes getting the tiebreaker.

Following the final round of green flag pit stops, Matt Crafton, who just so happens to be one of Rhodes’ teammates, had quite a bit of speed and worked his way through the field rather easily, but as soon as he got to where he had to battle his teammate for position, he suddenly couldn’t complete the pass and make it stick.

It was almost as if someone had flipped a switch on the No. 88 Toyota.

Interestingly enough, with Crafton “unable” to complete that pass, that left Rhodes and Friesen tied in the standings. Essentially all that needed to happen was for the pair to finish in those same positions and Rhodes got a shot to run at back-to-back titles. Enter Eckes, who somehow lost a few seconds worth of speed enough so that Rhodes was able to pass him for sixth and put him one point ahead of Friesen.

Of course, Friesen didn’t pull any punches during his post-race interview.

“I didn't have a teammate to lay over to give me an extra point.” – Stewart Friesen#NASCAR

Perhaps what’s even more interesting is the whole thing happened less than two weeks after NASCAR Cup Series driver Cole Custer was penalized for slowing down at the Charlotte Motor Speedway ROVAL, giving teammate Chase Briscoe better track position, which ultimately led to Briscoe moving into the Round of 8.

Custer and the Stewart-Haas Racing team were penalized under Section 5.5 of the NASCAR Rule Book, which states, “NASCAR requires its Competitor(s) to race at 100% of their ability with the goal of achieving their best possible finishing position in the Event,” and it’s the same in the Truck Series rule book too.

“When we got to the audio, and had the crew chief telling the driver that, ‘I think you got a flat (tire). Check up, check up, check up,’ when he couldn’t even see the car or have any idea whatsoever that the car might have a flat, obviously pretty telling as to what went on there,” NASCAR senior vice president of competition Scott Miller explained at the time. “That coupled with the data and the video and all the rest of the things that we looked into, well, that was the bulk of the things … nothing contradicted the fact that was done deliberately by those individuals, so we were certainly forced to react, and you saw their reaction today.

“We can’t have teams manipulating the finishing order. Certainly, on super high alert for the playoffs, and had this been the determining factor in the No. 14 (Briscoe) making it into the Round of 8 or not, our reaction certainly would have been bigger.”

It was a change from a couple years ago when Erik Jones was definitively told not to pass teammate Denny Hamlin but wasn’t penalized for his actions.

NASCAR remained curiously silent after the race despite making it clear following the Custer/Briscoe incident that its hands were tied when it came to issuing the penalty.

“The way that we have ruled on a past situation is always something that we consider, but we can’t lose sight of the fact that however we ruled on any other situation in years past, whether that be last year, five years ago or 10 years ago, doesn’t make what happened at the ROVAL OK,” Miller told SiriusXM. “And if we did not react to what happened at the ROVAL, it would be a serious dereliction of our responsibility to the rest of the competitors, the OEMs, the fans, and everything else. So, there are probably some situations in the past that we might wish we had back, but in no way, shape or form does any past ruling change the fact that what happened at the ROVAL was wrong, and we had to react to it.”

That right there only makes me wonder even more why the sanctioning body didn’t at least take a closer look at those closing laps between the trio of teammates.

I’m not outright making accusations here, but the optics aren’t pretty when two drivers whose trucks were running just fine all of a sudden faced trouble when their teammate was right at the cut line to expand the organization’s championship chances to two.

There are only a few people who know whether Crafton and Eckes helped their teammate or if they legitimately suffered such drastic changes to their equipment, but NASCAR’s credibility certainly comes into question by refusing to even look at it.

“I am really thankful for the opportunity to drive the No. 43 Chevrolet Silverado RST for GMS Racing in the NASCAR CRAFTSMAN Truck Series in 2023,” said Dye. “GMS Racing, their partners and staff, are the best in the business, and to drive their Chevy trucks next season is something that I have dreamed of for a long time. I’m counting down the days to coming back here at Daytona to race under the lights.”

Really fishing for a story here…

While I detest Ben Rhodes, if there was teamwork taking place, I fully support it. The penalties NASCAR sent out to SHR after the ROVAL was absolutely the wrong direction for the sport. Teams under the same corporate banner SHOULD work together in order to achieve their goal(s) as a company.

You should love F1 then.

Tom B
Reply to  Matty

I’m for teams manipulations of the race outcome. It makes it more funny when they accidentally take each other out of the race.

I watched in amusement at the two Thor Sports trucks tried so hard to pretend they were actually racing Rhodes for position. They would pull right to his back bumper, then just fall back time & time again.

I was so pulling for Friesen, but he just got triple teamed.

Tom B
Reply to  johndawgchapman

You were spot on, but not the TV booth.

The call on ThorSports is hard to make and there is nothing in the radio transmissions to suggest they were laying down to help their team mate, but it seems very, very, very likely they did. I agree they should not have made the call against Cole Custer because the slope is, indeed, slippery.
If you are going to get in the business of calling ‘balls and strikes,’ at least train the umpires ahead of time. In addition, the race director should be held accountable for terrible decisions made. The race director’s name never appears in print. There are a couple, and there is a trend between a single name and races that have controversial calls.

PS. The more I watch the Larson / Wallace accident, the more it looks like Larson left Wallace a lane.

I think the call that went against Custer was only made because of the crew chief saying “I think you have a flat tire” when, at that moment, the crew chief could not even see the car and be able to make that determination. Other NASCAR teams were paying attention to that ruling and won’t make that same mistake.