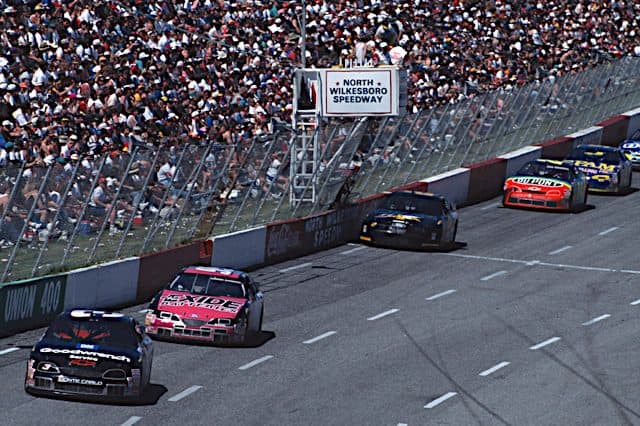 Update (Sept. 8): NASCAR confirmed the news Sept. 8 that the All-Star Race for the NASCAR Cup Series will be held at North Wilkesboro Speedway in 2023.

The race will be part of a three-day weekend running May 19-21.

This comes after North Wilkesboro canceled its dirt events that were set to run in October.

The NASCAR Cup Series last ran at the short track in 1996, running 93 races in all.

I will also fix the all star race format for nascar too.

Run it as a standard race like they did before the play off format began. Call it the Tyson Holly Farms 400 All Star Race. No gimmicks, no stages and bring a tire that aggressively wears so the drivers need to manage their stuff.

i think they need to run the cup cars that last raced at north wilkesboro. see how the “all stars” do in those cars.

I think they should be in Super Late Models or Modifieds. Let them use real “race” cars! Or the cars from 1979!

SMI is partly responsible for the loss of this gem 25+ years ago and now they’ll be lauded like they’ve been working for 20 years to bring it back. Absolute marketing/PR genius.

Bob Bahre shoulders the rest of the blame, refusing to do anything with his half either while both owned it.

I have another word for Bruton but I won’t add it here.

Well, at least this will give me a reason to look forward to it next year.

They haven’t said what the format will be. Going by past history I will bet on it being ridiculous.

Of course it will be stupid. It always is. That won’t matter to me next year. I will just be glad to see Cup cars running on that track. If they do it the year after, probably not. The novelty will have worn off.

How much of the $17 million of taxpayer money spent there will be reimbursed? LOL

Shayne
Reply to  Fed Up

Don’t worry, it’s free money. I wonder how much of the 18 million will actually go to infrastructure improvements for the track? How much money is NASCAR, SMI, et al. putting into this venture?

There’s isn”t much in N. Wilkesboro. Just a very few places to stay or eat. Experienced fans know the drill. Ought to be interesting for the uninitiated fans.

I agree with you Shayne. It’s pretty remote so will be fun to watch.

We were on our way to a wedding in NC some years ago and saw the signs for the track so we stopped and looked around. The signs for NASCAR were still there and it was sad but also cool all at the same time. Good idea to bring this track back! I agree though they should use the “classic” NASCAR format not this new garbage.