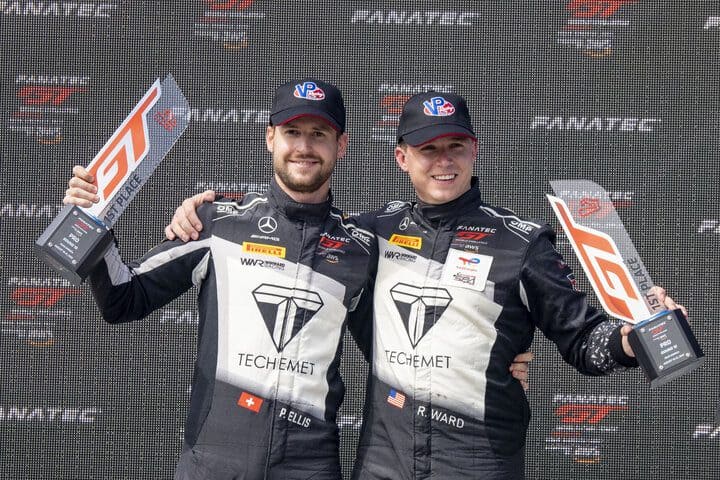 Winward Racing’s Philip Ellis and Russell Ward dominated Race No. 2 for Fanatec GT World Challenge America Powered by AWS Sunday (Aug. 21) at Road America.  The duo led every lap outside of the pit window to claim the weekend sweep.

“This is three in a row [for us].  We just had the car to win,” Ward said to SRO America’s Shea Adam after the race.  “Philip [Ellis] had the thick of it.  He had to hold [Jordan] Pepper.”

Ellis started his Mercedes on the pole and was able to outdrag Racers Edge Motorsports’ Mario Farnbacher to turn 1.  Further back, there was a stackup on the left lane.  K-PAX Racing’s Andrea Caldarelli had a brief hitch when it was time to punch the accelerator.  That resulted in Triarsi Competitzione’s Onofrio Triarsi running into the back of Caldarelli.  TR3 Racing’s Corey Lewis ran in the back of Triarsi, then Crowdstrike Racing with Riley Motorsports’ Colin Braun ran in the back of Lewis.

Braun was only starting at the back because the team went to a backup car.  The primary car was eliminated for the weekend in the opening lap crash in Saturday’s race.  Otherwise, Braun would have started sixth and been ahead of the stackup.

Braun’s hit on Lewis significantly damaged the front end of Braun’s Mercedes.  By the time he reached turn 5, the hood had flopped up on the Mercedes, blocking his vision.  He was able to get back to the pits, where the hood was removed and Braun continued.  The incident resulted in Braun spending much of the race running roughly 25 seconds ahead of the leaders.

At the first corner, K-PAX Racing’s Jordan Pepper was able to get past Farnbacher and move up to second.  Early on, Pepper tried to pressure Ellis for the lead, but simply couldn’t stay with the No. 33 Mercedes.  Ellis was maintaining a breakneck pace to extend the lead to over seven seconds in the first half-hour.  This only continued to expand as the teams reached the mid-race stops.

Winward Racing appeared to be unstoppable, and a penalty for K-PAX Racing made them even more so.  The minimum pit lane delta time for pit stops in Fanatec GT World Challenge America Powered by AWS at Road America is 86 seconds.  You are allowed a one-second “joker” each weekend that can only be used once.  The pit stop for the No. 3 Lamborghini was 84.963 seconds.  That is .037 seconds too quick and resulted in a drive-through penalty.

As a result, Misha Goikhberg ended up outside of the top 10 overall after the penalty. He was able to drive up to eighth overall before mechanical issues forced Goikhberg to pull off just before the Kink with a little more than 10 minutes to go.

That meant that Ward ended the pit stop sequence with a lead of 25 seconds over Michele Beretta.  From there, Ward only increased his lead en route to victory.

Ellis and Ward’s margin of victory was 27.393 seconds over Beretta and Caldarelli, although that advantage was as high as 31 seconds at one point.  With Turner Motorsport forced to withdraw after the first lap crash on Saturday, Goikhberg and Pepper ended up third.

In Pro-Am, Farnbacher settled in in third overall and was able to expand his lead over Wright Motorsports’ Jan Heylen.  Farnbacher was able to pull away during his stint in the car.

As a result, Farnbacher was able to give Ashton Harrison a big lead when she got in the car.  Harrison was never seriously challenged on the way to victory.

Despite running into Caldarelli at the start and getting hit from behind by Lewis, Triarsi was able to open up a good lead over GMG Racing’s James Sofronas.  Despite the start-line damage causing the exhaust to scorch the rear bodywork, Triarsi and Charlie Scardina managed to take the win by a lap.

Fanatec GT World Challenge America Powered by AWS will be back in action the weekend of Sept. 23-25 at Sebring International Raceway.  Race No. 1 is scheduled for Sept. 24 at 2:15 p.m. ET and will be streamed on the GT World YouTube channel.