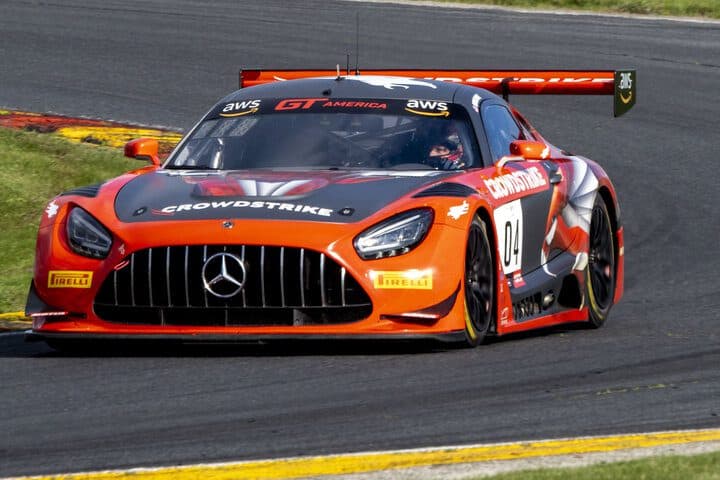 Crowdstrike Racing with Riley Motorsports’ George Kurtz led flag-to-flag Sunday morning (Aug. 21) to win the second GT America Powered by AWS race of the weekend at Road America, which was marred by a big crash in the GT4 class in the final minutes.  It is Kurtz’s sixth win of the year.

“Luckily, we got a gap [over Andy Pilgrim] and I was just trying to manage the tires,” Kurtz told SRO America’s Shea Adam after the race.  “I had a good scrap with Andy; that was fun.”

By virtue of setting the fastest time in Race No. 1 Saturday, Kurtz started from the overall pole with SKI Autosports’ Andy Pilgrim right behind.  The two drivers quickly ran away from the field in an attempt to settle things among themselves.

15 minutes into the race, a couple of incidents occurred to neutralize the race.  First, Rotek Racing’s Chris Alliegro spun his Ford Mustang GT4 exiting the Kink.  While Alliegro didn’t hit anything, he was unable to get back underway and stalled.

A couple of corners later, Joey DaSilva spun his Supra exiting turn 13 and hit the wall on the left side of the track.  This resulted in the wall needing some attention.

In a 40-minute race, it doesn’t take much for a good chunk of the race to be run under yellow.  By the time the track was cleaned up, there were less than nine minutes remaining.  Drivers needed to make some hay.  Unfortunately, that led to more chaos.

BSport Racing’s Bryan Putt made a big move to the inside of Zelus Motorsports’ Sean Whalen in turn 8 and managed to get in the left rear of GMG Racing’s Jason Bell.  Bell spun out and Whalen had nowhere to go but directly into Putt’s No. 15.  This brought out the second safety car.  Both drivers walked away from this crash, but were likely not very happy.

Meanwhile, an even bigger wreck broke out on the frontstretch when The Heart of Racing’s Gray Newell and Hattori Motorsports’ Seth Lucas came together and went hard into the wall on the left side of the track.  The wreck was not shown on the broadcast, but an enterprise fan in the grandstand that posts under the name MotoKris1 caught it on his cell phone.

Newell actually saw the video and posted in the comments that he has a dislocated shoulder as a result of the crash.  With only a few minutes remaining in the race, that brought out the checkered flag.

In GT4, Rotek Racing’s Robb Holland started from the pole and drove off into the distance, looking for his second straight weekend sweep.  Unfortunately for Holland, it was not meant to be.  15 minutes into the race, Holland was forced to make an unscheduled pit stop due to a cut tire immediately before the first caution of the race.

Holland’s pit stop gave the lead over to Lucas just as the first yellow flew.  Following the restart, Lucas and Newell were racing for the GT4 class lead prior to their crash on the frontstretch.

As a result of the crash, Flying Lizard Motorsports’ Elias Sabo inherited the class lead and victory on the road.  However, Sabo was stripped of that victory due to a post-race drive-through penalty being applied.  As a result, Premier Racing’s Adam Adelson inherited the victory.

GT America teams will be back in action the weekend of Sept. 23-25 at Sebring International Raceway in Florida for the seventh race weekend of the season.  Race No. 1 is scheduled for Sept. 24 at 12:10 p.m. ET and will be streamed on the GT World YouTube channel.