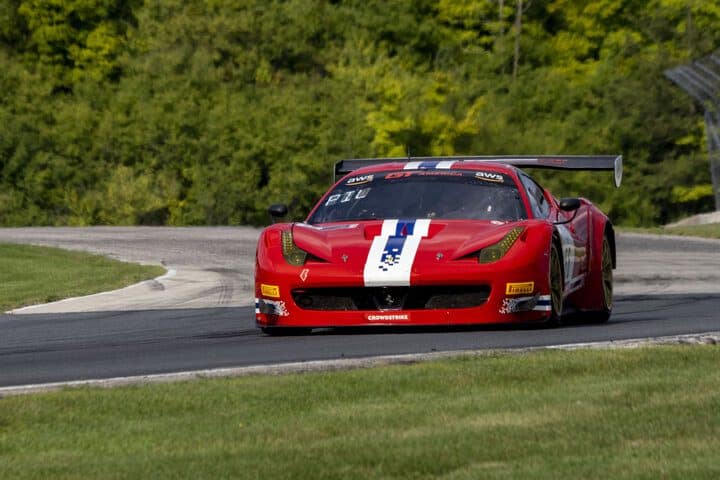 SKI Autosports’ Andy Pilgrim took advantage of a collision between Jason Daskalos and Jason Harward on the third lap of the race Saturday (Aug. 20) to take the lead.  From there, the 65-year old held off a charging George Kurtz to claim the victory in GT America Powered by AWS Race No. 1 at Road America.

“George [Kurtz] was coming so hard.  I saw [him] getting bigger and bigger in my mirror and I saw the Mercedes,” Pilgrim told SRO America’s Shea Adam afterwards.  “I thought traffic might help me, but it might not.  The old girl won it for me.”

Zelus Motorsport’s Jason Harward led the field to green in his Lamborghini, but trouble broke out at the first corner.  Daskalos and Kurtz attempted to split Harward and contact was made.  Daskalos ended up sweeping into the overall lead while Kurtz spun his Mercedes.

Harward hung back for a little bit before trying to make a charge to get the lead back.  On lap 3, Harward got a run on Daskalos exiting the Kink and tried to get to the inside of the Audi entering Canada Corner.  Contact was made, resulting in Daskalos spinning.  When the Audi spun, Daskalos then clipped the right rear corner of Harward’s Lamborghini, damaging the car and breaking the toe link.

Pilgrim was able to take advantage of these shenanigans to get his Ferrari 458 GT3 into the overall lead as both Harward and Daskalos struggled to get back underway.  Harward was able to get back to the pits, but his Lamborghini was crabbing en route.  Daskalos’ steering was shot.  As a result, his car understeered into the gravel at turn 14, bringing out a safety car period.  Ultimately, both Daskalos and Harward were out of the race.

The class split allowed Kurtz to move back up the order.  At the time of the yellow, Kurtz was trying to make his way through the slower GT4 traffic.  Split rules allowed him to move up to fifth behind the GT2 Audi of CJ Moses.

When the green came back out, Pilgrim was able to open up a gap on GMG Racing’s Kyle Washington.  Meanwhile, Kurtz dispatched of Moses immediately for fourth.  With just less than 13 minutes to go, Kurtz was able to take second from Washington.  By that point, he was over five seconds behind Pilgrim.

Over the next several laps, Kurtz was able to close in on Pilgrim at a rate of approximately one second a lap.

Pilgrim’s margin of victory was .423 seconds over Kurtz.  Mishumotors’ Mirco Schultis was third in his Callaway Corvette C7/GT3, then Washington.  Moses ended up fifth overall in his Audi R8 LMS GT2.

In GT4, BSport Racing’s Bryan Putt started from the pole and led early.  Meanwhile, much like in the SRO3 class, there was trouble in the first turn.  Accelerating Performance’s Moisey Uretsky was nudged by Conquest Racing’s Custodio Toledo into the grass.  After blasting through an advertising placard, the two cars shot out across turn 1 and took out GMG Racing’s Jason Bell.  The contact ultimately put Uretsky out of the race, but Bell and Toledo were able to continue.

Rotek Racing’s Robb Holland was able to get a run on Putt through the Moraine Sweep and was able to make the pass to take the class lead entering turn 5.  Once out front, Holland pulled away a little bit before the yellow flew.

On the restart, Holland was able to pull away from the rest of the GT4 runners.  Behind him, Premier Racing’s Adam Adelson was able to get up to Putt and snatch second.  However, he could do nothing with Holland, who drove off to take his third straight GT4 victory in his Porsche Cayman GT4 RS CS after sweeping Nashville two weeks ago.

Holland ended up sixth overall in his Porsche.  He backed off on the final lap so that the margin of victory was 1.848 seconds over Adelson despite leading by nearly five seconds at the start of the final lap.  Hattori Motorsports’ Seth Lucas, who swept the weekend at Watkins Glen, was third.  Putt was fourth, while Ross Chouest was fifth.

With a lap at 112.743 mph, Kurtz set the fastest lap of the race while trying to chase down Pilgrim.  That earned him the pole for Race No. 2 on Sunday.  That race is scheduled to go green at 10 a.m. ET Sunday morning and will be streamed live on the GT World YouTube channel.