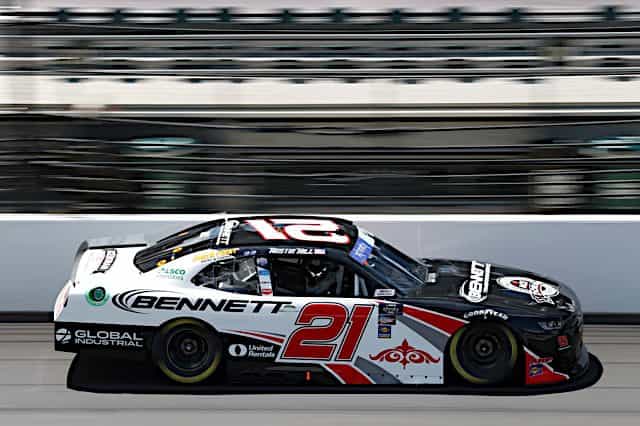 After the pack racing tracks, the 28-year-old Hill’s most consistent form of racing has been on … drum roll … road courses.

Entering Saturday’s (July 30) race on the Indianapolis Motor Speedway road course, Hill has finished in the top five in all three road course events this season.

He was second at Circuit of the Americas in March and followed that up by placing third in the rain at Portland International Raceway and then coming home fourth at Road America.

Saturday, Hill will start ninth after a disappointing qualifying run.

He will try to earn his third career Xfinity win, but his second NASCAR win on a road course. In case you’ve forgotten, Hill claimed the 2021 NASCAR Camping World Truck Series race at Watkins Glen International.

If Austin Hill, Road Course Ace snuck up on you (it did for me), Hill doesn’t seem surprised by it.

“I’m very excited about today, I love road course racing,” Hill told Frontstretch Friday prior to qualifying. “We feel like the road courses kind of owe us a little bit just because we have been so good on the road courses and have shown speed. We just get down to the end of the race and we’re just missing that little bit to come home with the win.”

Hill, who has 155 NASCAR starts across Trucks and Xfinity, said his love of road courses goes all the way back to his days racing Bandoleros and Legends cars.

The racing results in a driver “really abusing the car” to get the job done.

“Anytime we ran road course races I just love … all the shifting that you’re doing, you’re turning left and right,” he said. “You’re hopping curbs. You’re driving the heck out of these racecars to go fast. And that’s what I like about that. I feel like it kind of puts it in the driver’s hands.”

When practice concluded Friday, it wasn’t a surprise that AJ Allmendinger topped the speed chart — and eventually won the pole.

But behind the road-course veteran in second was Hill. In his No. 21 Chevrolet, Hill posted a fast practice lap of 95.524 mph.

Allmendinger, who won the inaugural Cup race on the Indianapolis road course last year, has noted Hill’s success this year.

“I think he’s just ultimate smooth,” Allmendinger said. “He doesn’t really make a lot of mistakes. He makes sure he’s just there during the race. And he gets everything out of it.”

Allmendinger gets a better sense of Hill’s capability than others thanks to Kaulig Racing’s technical alliance with RCR.

“It’s good to have him here … so we can bounce ideas off each other and make your cars better,” Allmendinger said. “He’s doing a fantastic job. I thought the same way that in Trucks like, he was just always there. And then he started winning some races, he gets confidence and he’s doing a fantastic job in that car. You just know that he’s going to be there at the end of this race inside the top five somewhere and you’re gonna have to battle with him.”

Unfortunately for Hill, he wasn’t at smooth as he would have wanted in qualifying, placing ninth ahead of Justin Allgaier.

After making the second round, Hill got his right-side tires on the curbing of turn 14 heading onto the frontstretch, which messed up the start of his lap.

“It was not a pretty lap,” Hill told Frontstretch afterward. “You want to use all the curbing you can, but if you hit them a certain way it can really upset the car and I hit it the wrong way … then I just started making just little mistakes here and there that just added up throughout the lap just trying to push as hard as I could.”

Despite the mistake, Hill kept up his streak of qualifying inside the top 10 for every road course race this season.

“I felt like the car was good,” he said. “It’s probably a little better than I was today, honestly. But I think it’s gonna be a fun race if we can stay out of all the melee, all the mess, stay up front all day. I think we have a real good shot at it.”