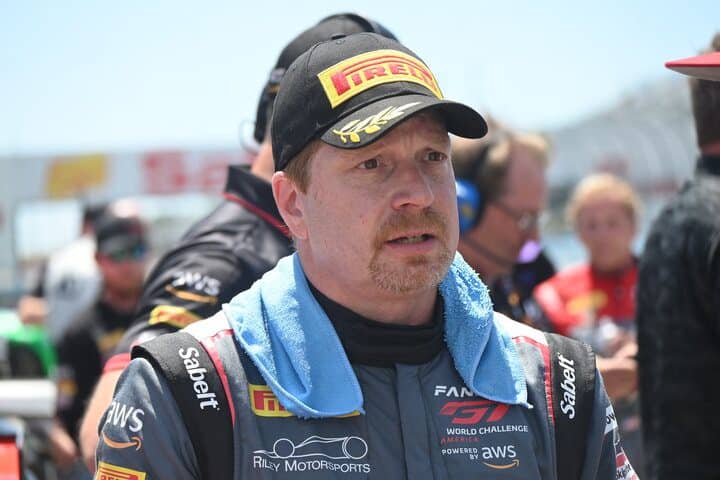 “The Crowdstrike/Riley Mercedes was great [today],” Kurtz told Frontstretch afterwards. “It was just a matter of maintaining the pace. When we needed to pull a gap, we could.”

Kurtz started from pole with Zelus Motorsports’ Jason Harward alongside. Kurtz was able to pull away quickly, but a caution erased that lead. Mirco Schultis, driving a Callaway Corvette C7/GT3, crashed on the first lap along with the Audi of Jason Daskalos. He attempted to drive away, but ended up parking in an unsafe place exiting the Inner Loop. Daskalos was able to continue, but had nose damage on his Audi R8 LMS Ultra.

Once Schultis’s car was pulled away to safety by four men, the green came back out. Kurtz was able to pull back out to a nearly three-second lead. That lead disappeared almost immediately as Harward ran him down.

Before Harward could do anything, the race’s second yellow flew when RENNtech Motorsports’ Paul Kiebler spun exiting turn 1 and hit the inside tire barrier. Kiebler was able to drive his Mercedes-AMG GT4 back to the paddock, but he was done for the day. After a somewhat expensive weekend for SRO America teams at VIRginia International Raceway last month, SRO America officials have vowed to punish contact more heavily. Flying Lizard Motorsports’ Elias Sabo was given a stop and 60-second hold for incident responsibility because of this crash.

In the closing laps, Harward tried to keep the pressure on Kurtz for the lead. Unfortunately, he went a little too hard on the accelerator exiting turn 7 and spun with just under five minutes to go. That was all Kurtz needed to take the win.

Kurtz’s margin of victory was 13.854 seconds over Jeff Burton. Daskalos had inherited second, but was given a one-minute hold in the pits with two laps to go.

Hardpoint’s PJ Hyett was third in his Porsche on debut, but a massive 51.939 seconds back. Daskalos ended up fourth.

In GT4, SRQ Motorsports’ Marko Radisic was supposed to start from pole in his BMW, but was penalized for coming up light at the scales following the morning qualifying session. That elevated Seth Lucas, making his GT America debut for Hattori Motorsports after starting the year in Pirelli GT4 America SprintX, to the pole. Note that Hattori Motorsports is a sister team to NASCAR Camping World Truck Series team Hattori Racing Enterprises.

Once the race started, Lucas was able to settle into a rhythm and pull away from the rest of the class. Meanwhile, Radisic was trying to recover from the penalty, but only managed to make things worse. On lap 7, he made contact with the Aston Martin of Moisey Uretsky in turn 8, spinning Uretsky out. Radisic received a stop and 60-second hold for the contact. As a result, he finished a lap down in 17th in GT4, 22nd overall.

Chouest-Povoledo Racing’s Ross Chouest was able to put some pressure on Lucas on the final restart with 10 minutes to go. Lucas was able to resist this pressure and hold on for the win.

“It was awesome,” Lucas said afterwards. “The [Hattori Motorsports] team put together a great car. I can’t thank them enough for all of this.”

Lucas ended up fourth overall with the issues in the GT3 class. He was 2.591 seconds ahead of Chouest at the finish. GMG Racing’s Jason Bell was third, then Premier Racing’s Adam Adelson. BSport Racing’s Bryan Putt was fifth.

By virtue of setting the fastest lap in the race, Kurtz will start Race No. 2 Sunday morning from the overall pole. Lucas will also have pole in the GT4 class.

Race No. 2 is scheduled to go green at 9 a.m. ET Sunday morning. The race will be streamed live on the GT World YouTube channel. Frontstretch will have coverage of that race Sunday morning as well.