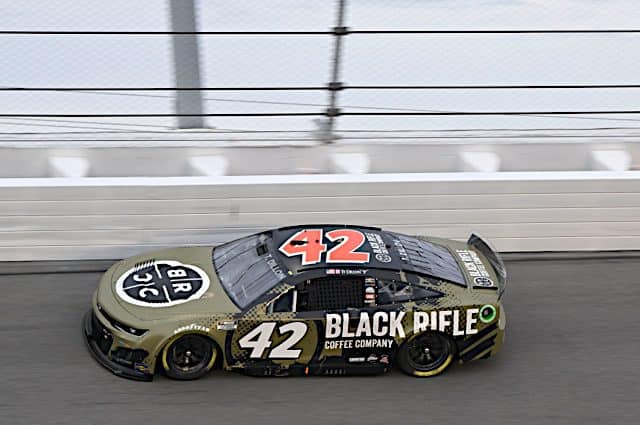 One big piece of news that broke last week could have major implications on the NASCAR Xfinity Series field.

No, I’m not talking about the news that Tyler Reddick will join 23XI Racing in 2024. I’m talking about the second piece of news that broke: that Ty Dillon and Petty GMS Motorsports have agreed to part ways following the conclusion of the 2022 season.

That announcement has an even bigger impact on what the Xfinity Series will look like in 2023 than Kyle Busch’s future with Joe Gibbs Racing, as there is only one logical replacement: Ty Gibbs. Let’s focus on the open No. 42 Petty GMS Chevrolet ride and which current Xfinity regulars could find themselves NASCAR Cup Series racing in ’23.

Gragson is likely on several teams’ shortlists for 2023. He is an excellent candidate for a Cup ride with immense talent. With the Petty GMS ride opening up, he now has three potential landing spots, with the other two being Stewart-Haas Racing’s No. 10 and Kaulig Racing’s No. 16.

While he’ll likely carry the Road America incident for the foreseeable future, Gragson is nonetheless talented. He holds a strong relationship with Bass Pro Shops, which could follow him in some capacity. Additional sponsorship dollars could benefit Petty GMS, which only emphasizes Gragson’s evaluation. And his other main sponsor, Black Rifle Coffee Company, is already a sponsor on the No. 42, so you know they’re already sold on him.

What do you think of NASCAR's decision? Call in at 1-844-627-2276 and join us for #MotorMouths NOW on @PeacockTV. pic.twitter.com/XX5PRZlGoM

I believe it’s safe to say that Gragson has achieved more than Dillon in his NASCAR career. While Gragson would essentially be a green Cup driver, he would bring a wealth of knowledge and experience to the No. 42. And not only on the track — JR Motorsports is a well-run operation. He can share nuances with the No. 42 team that have made JRM the powerhouse that it is.

It isn’t easy to imagine Berry driving for another owner besides Dale Earnhardt Jr., but he is a prime candidate for a Cup team.

In 2021, he made 22 combined starts in the Xfinity Series for JR Motorsports and Jordan Anderson Racing. His assimilation into the series, from his first race at Daytona International Speedway to his first career win at Martinsville Speedway, was remarkable. Yes, he did have seven previous starts between 2014 and 2017, but 2021 was his first consistent opportunity where he was in the car week in and week out.

Berry has won four times in 40 starts since February 2021 and scored 24 top 10s. He currently sits fourth in the Xfinity standings and is just as competitive as his JRM teammates. It’s as if he’s been racing in the series full time for several seasons.

He is a quick learner, and JRM would miss his talents, but the No. 42 Petty GMS ride may be the best Chevrolet stepping stone, with potentially lower expectations, to a ride at another Cup team. Maybe Richard Childress Racing in 2024? Maybe even Kaulig?

He’s made three Xfinity Championship 4 appearances, has a year of Cup experience and is the reigning Xfinity champion. Hemric’s name should be on the list of potential successors in the No. 42 Petty GMS Chevrolet.

The mark against Hemric is that winning a national-level race took him so long. But let’s not overlook what he has accomplished. He reached the Championship 4 race in his rookie and sophomore seasons with RCR. He had a tremendously consistent sophomore season, finishing in the top 10 in 23 of 33 races. In 2021, he scored 21 top 10s and could have had three or four more if not for issues stripping him of a good finish.

So far in 2022, it’s been a rough go of things for Hemric and Kaulig Racing. He’s failed to reach victory lane, but progress has been made over the past month. Hemric may not be the top choice compared to Gragson or Berry, but he is still worth consideration.

Petty GMS needs a driver who won’t wreck the car and can deliver consistent results that trend in a positive direction over a season. Hemric may only have one national victory, but looking deeper, he has been nothing short of consistent for the bulk of his career.

RCR would probably like to keep Hill in the No. 21 Xfinity ride for another season because Hill brings both talent and sponsorship to the table. And that is why Petty GMS should have eyes on him.

Hill wasn’t on many radars when Hattori Racing Enterprises signed him to replace Brett Moffitt in 2019, right after Moffitt had won the 2018 NASCAR Camping World Truck Series championship. Hill and HRE won straight away at Daytona, and until the regular season finale at Michigan International Speedway, Hill was more or less quiet. He won three of the final eight races that season before being a strong championship contender in 2020 and 2021.

See also
Fire on Fridays: RCR Needs to Go With a Free Agent This Time

It’s no secret that RCR is lagging just a bit in 2022. Whether that is the equipment or if it’s the experience level of their drivers, the fact remains that Hill is sixth in points, while Creed sits 14th.

I just outlined above that Creed has not had a stellar year, is falling short of expectations and is being beaten by Hill two-thirds of the time. But Creed has a Truck Series championship, and Hill doesn’t. Creed has had all sorts of bad luck in 2022 too. But you still have to perform.

His Truck experience and success led him to drive the No. 2 RCR Chevrolet in the Xfinity Series, and he should get another opportunity in 2023. But if the stars align — and they must align — it could be Creed who climbs into the No. 42 Petty GMS Chevrolet in the 2023 Daytona 500.

If Reddick doesn’t return to RCR in 2023, that seat will enter the conversation of potential landing spots for drivers above. Of course, Gragson, Berry, Hemric, Hill and Creed could all return to the Xfinity Series in 2023 if Cup teams take other avenues to fill open seats. But don’t be surprised if one or two of these drivers are suiting up on Sundays instead of Saturdays in February.

The 42 doesn’t look like a career builder no matter who winds up in it.

Look at the 43 car, if 42 is as strong as it is and it’s the same organization, just a different class. Eric Jones could have a win by now with a little bit of luck, so I have to say it’s at least a top 15 ride and that’s being hard on them.

Noah Gragson would be better suited for the 8 car with its style of racing (and RCR as a historical whole), but we all Know Ty Dillon will be in that seat in 2023. The 16 of Kaulig will more than likely be Daniel Hemric now that he has an Xfinity Championship (and Sponsorship), if Almendinger chooses to stay in the Xfinity Series.