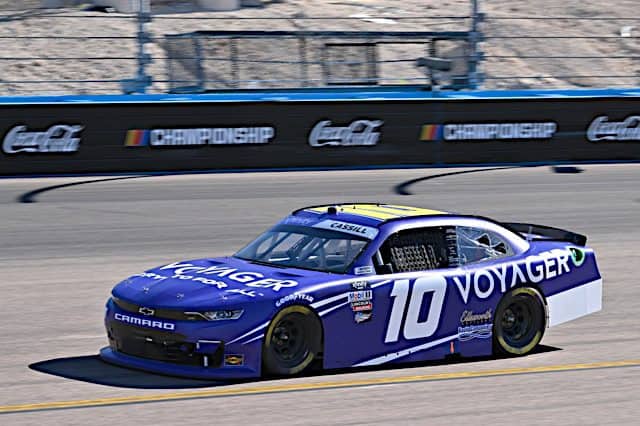 Noah Gragson’s penalty: too harsh, too lenient or just right?

NASCAR announced this week that Noah Gragson has been fined $35,000 and 30 docked points for intentionally wrecking Sage Karam and causing a 13-car melee at Road America in the NASCAR Xfinity Series

But the penalty wasn’t announced until July 6, four days after the race’s conclusion. Gragson was allowed to continue on for an eighth-place finish.

It would’ve been a bad look for NASCAR to do nothing. And that’s what it was looking like until the penalty was handed out.

Gragson’s attempted wreck of Karam is far from the only such incident to occur this year; at Darlington Raceway, Joey Logano wrecked William Byron for the win and received no penalty. But Gragson’s incident received considerable attention because it happened on the straightaway in a blind section of the racetrack, and the resulting crash destroyed a dozen racecars. With hundreds of thousands of dollars in damages and a risk of injury for an intentional crash, it was the right decision for action to be taken.

However, the penalty feels too small. The $35,000 fine is miniscule when compared to the damage that teams will have to repair. And after the 30-point penalty, Gragson dropped from fourth in the regular-season points to … fourth. As he is already locked into the playoffs, the points penalty will dock him a handful of playoff points at most.

The penalty also looks lenient when compared to the penalties that NASCAR hands out for pit-road safety violations. A runaway tire suspends the crew chief and tire changer of a team for four races. In the same race, Riley Herbst was given an immediate penalty for a safety violation on pit road. There are also pass-through penalties for removing equipment from the box, driving through too many pit stalls and being over the wall too soon.

Gragson’s points penalty effectively scored him the same number of points that the drivers taken out in the crash scored, but there was a surprising delay in handing out the penalty; especially when Gragson admitted that the contact was intentional in his post-race interview.

However, as small or delayed of a penalty it may be, it will still do its job in deterring future intentional crashes like this. There hasn’t been a shortage of overly aggressive driving and post-race incidents in 2022, and this penalty is precisely what is needed to send a message.

With Voyager’s bankruptcy, are cryptocurrency sponsors a no-go for teams in the future?

It was announced this week that Landon Cassill‘s primary sponsor Voyager suspended all transactions and filed for Chapter 11 bankruptcy.

The bankruptcy will not affect Cassill’s ride at Kaulig Racing at the moment, as he will remain in the No. 10 car for the foreseeable future. But Voyager’s financial woes in the ongoing cryptocurrency financial downturn is yet another blow to cryptocurrency sponsors in NASCAR.

In the months before the 2022 season, Parker Kligerman was rumored to drive full time in the Xfinity Series for Richard Childress Racing. However, he was replaced by Austin Hill when, reportedly, a cryptocurrency sponsorship deal fell through at the last minute. It was never officially announced what the partnership was, but Kligerman had previously partnered with a company called Fast during the 2021 season. It could be inferred it was a deal with them that fell through, especially since the company closed its doors in April 2022.

In another example, Brandon Brown struggled to find sponsors after the fallout from the audio of his race-winning interview on the Talladega Superspeedway frontstretch. He then resorted to a full-time sponsorship in 2022 by Let’s Go Brandon Coin, another cryptocurrency. That deal also fell through, and the coin was rendered worthless by February 2022.

Of course, not every cryptocurrency sponsorship has failed. In the NTT IndyCar Series, Rinus Veekay‘s car has featured Bitcoin livery in three races this season. So far, the pairing has gone off without a hitch. But because Bitcoin is the oldest and most popular form of cryptocurrency, it can be inferred that partnerships like these may be an exception to the rule.

With the current downturn, teams and drivers need to think twice about signing up for cryptocurrency sponsorships. With the current bankruptcies and deals falling through, it is not a reliable form of sponsorship for the time being.

With half of the Camping World SRX Series season complete, who is the favorite to win the championship?

Half of the SRX season is in the books, and the championship battle has turned into a four-horse race between points leader Ryan Newman, defending champion Tony Stewart and returning drivers Bobby Labonte and Marco Andretti. The drivers have gapped the rest of the field in points, and the four are only separated by 12 points at the top of the standings.

At the moment, Newman has the edge because he has an 11-point cushion over second-place Stewart. But that is far from a comfortable margin, and the championship will be decided by the dirt tracks. After this weekend’s race at Fairgrounds Speedway Nashville, the final two events will be held on dirt at I-55 Raceway and Sharon Speedway.

And if last season’s results are any indication, it appears that Stewart will be the favorite.

In the two dirt races at Eldora Speedway and Knoxville Raceway last season, Stewart won half of the stages and won both of the main events. He was virtually untouchable on the dirt last season, and anyone racing him for the title will need as large of a points margin possible heading into the final two weeks.

However, the big wildcard is Newman. As this is his first SRX season, we have not seen Newman race at the dirt tracks. Newman came from the same dirt racing background as Stewart, and all indications point to him being a contender in the final weeks of the season. He also has the points cushion to help him out.

It will most likely be a battle between Stewart and Newman, as Labonte and Andretti didn’t set the world on fire at dirt tracks last season; the pair combined for just one top-five finish. Therefore, the best hope for Labonte and Andretti is to win and score as many points as possible at Nashville this weekend to put themselves in a solid points position for the final two weeks.

Justin Marks makes his return as a driver for the NASCAR Camping World Truck Series’ debut race at Mid-Ohio Sports Car Course. Will he contend for the win?

Justin Marks has had quite the year. His co-owned Cup team, Trackhouse Racing Team, has won three races this season, and he made his SRX debut at Stafford last weekend. This weekend, he will be running for Niece Motorsports in the Truck race at Mid-Ohio, Marks’ first national touring series start since 2018.

It’s been a long time since Marks was behind the wheel in NASCAR, but if there’s one thing he proved as a driver, it’s that he can get it done on road courses. He won his first and only Xfinity Series race in 2016 at Mid-Ohio in dominating fashion. And in 15 road course races in the Xfinity Series, Marks has finished in the top 10 in seven of them.

However, despite being a former winner at the track, this weekend will present new challenges for Marks. Although he has made 38 starts in the Truck Series, none of them have come at a road course. He will have to adapt to the challenges of road course racing in a vehicle that he has only raced on ovals.

But Marks also has something in his favor that most of the field lacks: experience. As this is the first time that the Truck Series has competed at Mid-Ohio, Marks will be one of the few drivers with significant experience running the track. And with Niece’s strong showing at Sonoma Raceway earlier this summer, he certainly has a truck capable of contending for the win.

Marks will also have the benefit of not racing against Kyle Busch this weekend. Busch dominated at Circuit of the Americas and won at Sonoma this year, but he has already used up his allotment of Truck races for the season. Mid-Ohio will be the first (and only) road course of the season without Busch in the field.

With the number of questions surrounding Marks’ return, he could end up being dominant or a complete non-factor this weekend. Friday’s (July 8) practice and qualifying sessions will give a better idea of how Marks stacks up to the rest of the field.

The Gregson penalty was too little too late. He should have been parked immediately. And received at least a two-race suspension.

Your point is well taken, pit road penalties are for inadvertent infractions.

His action was deliberate, & way more dangerous & expensive than a lose tire on track.

Tom B
Reply to  johndawgchapman

IMO pit stop violations should be a fine, except for speeding. None of the violations increases or gives you an advantage. The violation itself makes you lose spots, so why pile on.
Intentionally wrecking a competitor should be a suspension and parked.

Crypto currency value is based on the mind that thought it up. Buy crypto and your buying thin air. Keep them out of nascar. But Brian or Ben or whoever will do anything for a dime. For themselves.

Cryptocurrency sponsorship is no different than any other sketchy sponsors that have been allowed in NASCAR. Rusty Wallace comes to mind with his extended car warranty sponsor that ripped off customers. NASCAR has welcomed plenty of these types to donate cash when it benefits them.