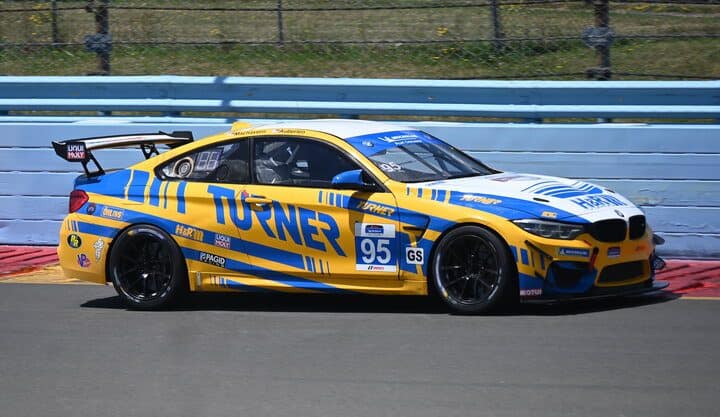 Turner Motorsport’s Dillon Machavern set the pace in IMSA Michelin Pilot Challenge practice Friday (June 24) with a lap at 106.785 mph.  That said, the rest of the pack is very close behind.

Rennsport One’s Stevan McAleer was quickest in opening IMSA Michelin Pilot Challenge practice Thursday afternoon at Watkins Glen International with a lap at 106.441 mph.  The lap was three-hundredths of a second faster than the BMW of Turner Motorsport’s Bill Auberlen.  Murillo Racing teammates Eric Foss and Kenny Murillo were third and fourth in their Mercedes-AMG GT4s, while TeamTGM’s Matt Plumb was fifth.
Rebel Rock Racing’s Robin Liddell was sixth in his Camaro, followed by Mike Skeen in the FCP Euro by Ricca Autosport Mercedes.  Alec Udell in the Kelly Moss Porsche was eighth, while Owen Trinkler in the second TeamTGM Porsche was ninth.  KohR Motorsports’ Luca Mars was 10th, fastest of the Ford Mustang GT4s.
There was one red flag in the session, due to a off-course excursion for Alan Brynjolfsson in turn 5 with 10 minutes to go.  Prior to that, teammate Trent Hindman timed in 12th fastest.
Belgard & Techniseal Racing’s Denis Dupont was quickest in TCR with a lap at 104.930 mph, good for 24th overall.  Dupont’s lap was nearly nine-tenths of a second faster than Bryan Herta Autosport’s Ryan Norman.  JDC-Miller MotorSports’ Mikey Taylor was third in his Audi, followed by KMW Motorsports with TMR Engineering’s Tim Lewis Jr. in the sole Alfa Romeo.  Mason Filippi was fifth in the No. 77 Elantra.
41 of the 44 teams on-site practiced in the 60 minute session.  The Corsa Horizon No. 12 Aston Martin made a couple of out laps during the session, but never made a lap at speed.  PF Racing’s No. 40 Ford Mustang GT4 for Chad McCumbee and James Pesek, along with the Van der Steur Racing Hyundai of Tyler Gonzalez and Rory van der Steur did not practice at all.

In Friday morning’s 60-minute session, Machavern set the best time of the weekend 21 minutes into  the session in his final lap in the car.  It held up from there.  The lap was .063 seconds quicker than McAleer’s teammate Eric Filguerias.  Mars set a lap in the closing 10 minutes to the session to get himself up to third, while Robby Foley was fourth in the second Turner BMW.  Udell was fifth in his Buddha Porsche (the car has a Buddha decal on the doors).

VOLT Racing’s No. 7 Aston Martin did get out on track, but only got a few laps after their crash in the opening session.  Hindman ended up 13th overall.

In TCR, Lewis’ Alfa Romeo was fastest with a lap at 104.492 mph, good for 26th overall, but slower than Dupont’s lap from Thursday.  Lewis’ lap was a mere three-thousandths of a second faster than Robert Wickens in the best of the Hyundai Elantra N TCRs.

Filippi was third fastest, followed by teammate Parker Chase.  VGRT’s Karl Wittmer was fifth in the best of the Hondas.

Qualifying for the Tioga Downs Casino Resort 120 i scheduled for 3:35 p.m. ET Friday afternoon.  Frontstretch will have a recap and an interview with the pole winner for your pleasure.