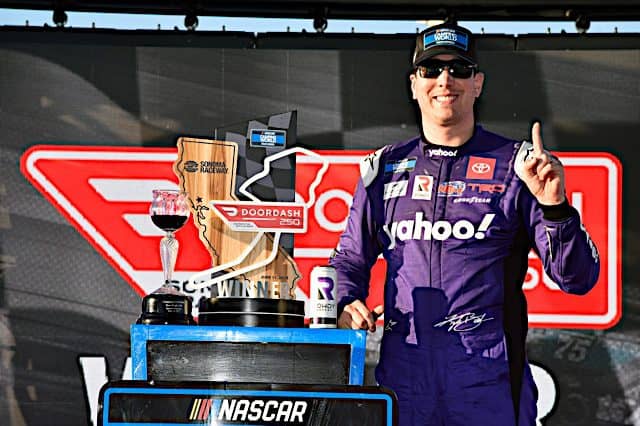 Kyle Busch has now won at least one race in the NASCAR Camping World Truck Series for 10 consecutive seasons.

And he accomplished the feat in impressive fashion Saturday (June 11) at Sonoma Raceway, leading 45 of 75 laps en route to winning the DoorDash 250 in Wine Country. It was Busch’s first Truck win of the year and the 62nd of his career, coming in his final scheduled Truck start of 2022.

Busch took the lead from Ross Chastain in stage one and only relinquished the lead when he pitted. He was on pace to cruise to the win before a few late cautions, including a 12-minute red flag for a multi-car wreck, forced NASCAR Overtime.

Zane Smith made a quick move to gain second on that restart, but Busch said, “Adios, amigo,” and took the checkered flag by 1.176 seconds.

“We just continued to work on the truck all weekend and make it better,” Busch told FOX Sports 1. “We had a struggle at Charlotte a couple weeks ago but today was really good.

“Awesome job by the guys in making adjustments to get us the win today. Yesterday was ugly. I wasn’t sure about it. I didn’t feel good about the truck. They worked on it all night long. We made some great changes and made some chassis changes.

Hocevar broke his right tibia in a crash at World Wide Technology Raceway at Gateway last week, but it appeared he was getting the weekend off to a good start — sort of. He scored his first career pole after posting a fast lap of 91.135 mph in the second round of qualifying Saturday morning.

But Hocevar abruptly wiped out after that lap and was forced to start from the rear of the field.

To the top of the board but @CarsonHocevar gets big damage on his qualifying lap. pic.twitter.com/Bn2B3nRUhH

Call to the Bullpen

On Lap 11, Hocevar pitted to make a driver change, and in came Suarez, who got behind the wheel of the No. 42 and returned to the race in 35th, two laps down. Hocevar had to start the race to earn the much-needed championship points per the NASCAR rulebook.

“I wasn’t sure I would be able to finish the whole race,” Hocevar told FOX Sports 1. “Sometimes the hardest decision is maybe the smartest one.”

Suarez helped back up Hocevar’s choice by driving all the way through the field to finish sixth, earning both laps back in the process.

If Busch wasn’t in the race would be the short answer, but Chastain did jump out to an early lead over the two-time NASCAR Cup Series champion and Majeski before fading. In fact, Chastain, who has won twice this year on the Cup circuit, had as much as a three-second advantage within three laps.

With 10 laps remaining in stage one, Chastain held a 1.5-second lead over Busch and Majeski. While he didn’t win that stage, then fell behind Busch on a stage two restart, Chastain still ended up fourth in what was strong race overall for Niece Motorsports (two trucks inside the top six).

Stage 1 Winner, If Not Chastain

Majeski held off a furious charge from Tyler Ankrum to snag the stage. It was his first stage win of 2022 driving the No. 66 for Thorsport Racing.

Christian Eckes, who was running ninth, crashed on Lap 27 in turn 8 after driving across the nose of Nemechek in the esses, which brought out a caution.

Eckes was not able to continue and wound up 35th, his first such result outside the top 30 this season.

On Lap 43, several drivers elected to pit before the stage break, including Busch, Ankrum, Nemechek, Stewart Friesen, and Zane Smith. However, reigning series champion Ben Rhodes said, “Not this time, fellas,” and cruised to his eighth stage win of the season, followed by Chandler Smith.

Ankrum had an uncontrolled tire during his stop prior to the stage break and was sent to the rear of the field. Fighting back to ninth is a solid rebound, but likely disappointing considering how competitive his No. 16 Hattori Racing Enterprises Toyota was. Ankrum remains 50 points outside the playoff cutline and will likely need a win to advance.

Welcome to the Kyle Busch Show

Following the break between stages two and three, Busch pulled a Rhodes and did not pit, as he had done so prior to the end of the stage and inherited the lead. It allowed him to cruise out front once the final stage began.

With about 15 laps left in the 75-lap event, former Cup Series regular DiBenedetto tried to outbrake Friesen and took out a tire barrier en route to spinning himself and Friesen out to bring out the fourth caution of the race. While DiBenedetto was able to recover pretty quickly, Friesen didn’t have the same luxury.

Friesen and Josh Bilicki later got caught up in the day’s most vicious wreck, a three-car incident with Alex Bowman that left all three drivers out of the race. Frontstretch’s Bryan Nolen caught up with Friesen and Bilicki to see what went wrong.

Hailie Deegan was another driver who struggled toward the end of the race. She lost a right-rear tire entering turn 1 and smacked the wall, ending her day in 32nd place.

About a lap after the race got back underway, that’s when the big three-car incident occurred. Friesen got into the No. 30 of Josh Bilicki, triggering a melee just past the start/finish line. Friesen’s No. 52 Halmar International Toyota caught fire briefly before coming to a stop, while Bowman and Lawless Alan also caught a piece of the carnage.

Wrecks, fires, broken wine bottles — nothing was going to stop Busch from getting his first Truck win at Sonoma. He easily pulled away during the Overtime while teammate Chandler Smith lost second place to Zane Smith.

Sonoma was the first Truck race held at the 2.52-mile road course since 1998, when Boris Said claimed his only win in the series.

With a fifth-place result, Chandler Smith gained 12 points on defending series champion Rhodes, who brought his No. 99 Tenda Toyota home in 18th. In retrospect, the bold move by Rhodes to stay out to claim the stage win saved him from losing the points lead. Rhodes (444 points) maintains his advantage, but Smith is only a hair back (-5).

With a runner-up result, Zane Smith, who has three wins this year, is back in the hunt (-12). And Nemechek, who wrecked at Gateway last week, earned a solid top 10 in this one to remain on the prowl (-14).

Give it up for Jack Wood, our rookie of the race. Wood stayed out of trouble and finished a solid 16th, tying his second-best run of the year for GMS Racing.

The Camping World Truck Series will be getting dirty next Saturday, June 18 as the series hits Knoxville Raceway. Television coverage for the Clean Harbors 150 launches at 9 p.m. ET on FOX Sports 1.

And once again, he beats the High School kids. Big friggin’ deal!

I agree. I was so hoping he would not win just so I wouldn’t have to hear about his win streak in the truck series again. Well, at least he won’t be racing in that series for the rest of the year.