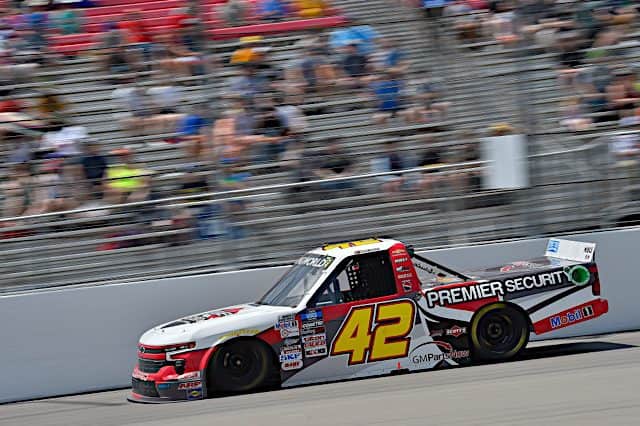 Carson Hocevar won his first career pole for Saturday night’s (June 11) NASCAR Camping World Truck Series race at Sonoma Raceway after he posted a fast lap of 91.135 mph in the second round of qualifying.

Unfortunately, right after he went to the top of the board, Hocevar crashed and his truck suffered heavy rear-end damage. The team is working to fix their primary truck in order to stay at the front of the field.

The crash comes after Hocevar’s wreck at World Wide Technology Raceway at Gateway last week. He broke his right tibia, leading to surgery but was approved to practice and race.

To the top of the board but @CarsonHocevar gets big damage on his qualifying lap. pic.twitter.com/Bn2B3nRUhH

Alex Bowman ran sixth and John Hunter Nemechek, who was fastest in the first group during round one of qualifying, will start seventh. Grant Enfinger, Hailie Deegan and Stewart Friesen finish up the top 10 in Saturday’s lineup.

No one failed to qualify for the Truck race after the No. 47 of G2G Racing withdrew. Stefan Parsons moved into the No. 46 truck from that withdrawn No. 47, replacing Mason Filippi who was originally entered.