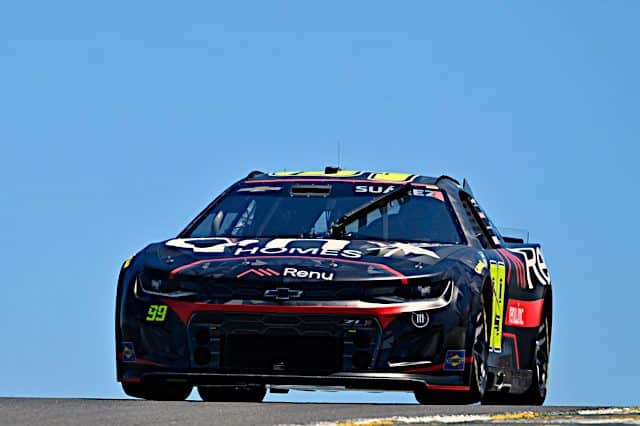 The win comes 15 years after Juan Pablo Montoya became the first Latin American driver to win a race in the NASCAR Cup Series, winning at the same track out in Wine Country.

Suarez is the 12th different winner in 16 races this Cup season and has likely secured a spot in the playoffs with the victory.

After running among the top five for nearly all afternoon, Suarez took advantage of the final stage restart to power by race leader Chris Buescher in turn 7.

Suarez then managed the lead for the final 40 circuits, carrying it through green-flag pit stops and a restart, to win by nearly four seconds over Buescher.

Speaking to FOX’s Jamie Little on the frontstretch, Suarez attempted to sum up his six-year Cup career:

“It’s been a rough journey in the Cup Series, and these [No. 99] guys believe in me, Trackhouse Racing [Team], Justin Marks, Ty Norris, everyone that helped me to get to this point,” he said. “A lot of people in Mexico, Jimmy Morales, Carlos Slim, my family. You know, they never gave up on me. A lot of people did but they didn’t, so, I’m just very happy that we were able… to make it work.”

"This is the first one of many."

It has been a long road, but @Daniel_SuarezG is a NASCAR Cup Series winner in Sonoma!@TeamTrackhouse | @NASCARonFOX pic.twitter.com/U893Gh8oUC

After the race, Buescher reflected on a victory just heartbreakingly out of reach.

“What a way to. . . come back to the racetrack,” he said. “But I didn’t get the job done there at the end. I feel like we should have had the win and I didn’t get it… I needed to make it happen on that restart and I didn’t… I should be happy, but I am disappointed to be that close.”

Michael McDowell, who continued his hot streak with a third-place finish, told Frontstretch‘s own Bryan Nolen: “We’re getting closer, but when you’re that close, it’s tough… we’re fighting hard to get in the playoffs, we want to win a race, that’s really going to be our only shot.”

The race didn’t start out swinging toward the underdogs. Pole sitter and reigning NASCAR Cup Series champion Kyle Larson comfortably won a calm first stage by nearly 12 seconds, coasting to it after nearly all his rivals pitted before the end of the stage.

Buescher, returning after a week out of the car due to COVID-19 protocols, hounded Elliott for much of stage two. But once again, the duo hit pit road before the green-and-white checkered flag, handing the lead and stage win to Joey Logano.

Those late-stage pit stops saw a bevy of penalties levied at front-running cars: Elliott’s crew quickly intercepted what could have been a loose wheel, but Elliott didn’t back the No.9 fully into his stall and suffered a penalty for pitting outside of the box. Tyler Reddick’s quiet top-five day was derailed by a speeding penalty, and Buescher’s crew got caught throwing equipment.

Chris Buescher’s penalty was reviewed by NASCAR and rescinded, though and the driver of the No. 17 started the final stage from the front before finishing runner-up.

On the final cycle of green-flag pit stops, a costly loose wheel for Larson brought out the race’s fourth caution (second for cause) with 28 laps to go. Larson’s crew chief Cliff Daniels will likely be suspended for the next four points races as a result – the 10th such suspension for a wheel to come off the car on track this year.

.@KyleLarsonRacin loses a wheel and brings out a caution. pic.twitter.com/AalDLRM2m0

From there, it was Suarez’s race to lose, controlling his advantage the rest of the way over Buescher and McDowell. Kevin Harvick came home fourth, followed by rookie Austin Cindric, who scored his first top-five finish since his victory in the season-opening Daytona 500. Ryan Blaney, Ross Chastain, Elliott, William Byron and Brad Keselowski rounded out the top 10.

Only four cautions occurred on the day, two outside of the typical stage breaks. A difficult year for 23XI Racing and Bubba Wallace continued, with driver No. 23 suffering an engine failure just 10 laps in that eliminated him from the running and brought out the first of only two cautions for cause.

Bubba Wallace is done for the day after 10 laps at Sonoma. https://t.co/fPbhFctoI2 pic.twitter.com/TwZepF4vPx

The NASCAR Cup Series returns after an off week on Sunday, June 26, with the Ally 400 at Nashville Superspeedway. It’s the season’s first race covered by NBC Sports, with coverage beginning at 5 p.m. ET.

Very happy to see Daniel finally break through. He ran a good race and his team performed down the stretch. Good for them.

Actually I would have been glad for any of the top 3 had they won (Suarez, Buescher or McDowell). Another spot filled, with only four left. Someone who expected to be in the playoffs when the season started is going to get left out unless we finally break the 16 winner ceiling. Usually this is the time of the season where a few guys start racking up wins and separating themselves from the field. Ten races left.

stubbscupseriesdotcom
Reply to  Bill B

I think Harvick may be the odd one out. I feel like we’re either going to get 16 winners or we’ll get one more and Bell, Blaney, Truex, and Almirola\Reddick\Jones will be the one “wildcard” to point themselves in. 2 superspeedways left too though, so Bubba, Stenhouse, Lajoie, etc may fill a spot as well.

Really happy for him, he never gave up. This is a feel good race.

It was nice to see a driver of Mexican descent win an event that went the full distance. I was really surprised when cars spun out and no caution came out to get another double file restart. The brain trust in Daytona will not be pleased and will undoubtedly show their displeasure in the Monday morning meeting.