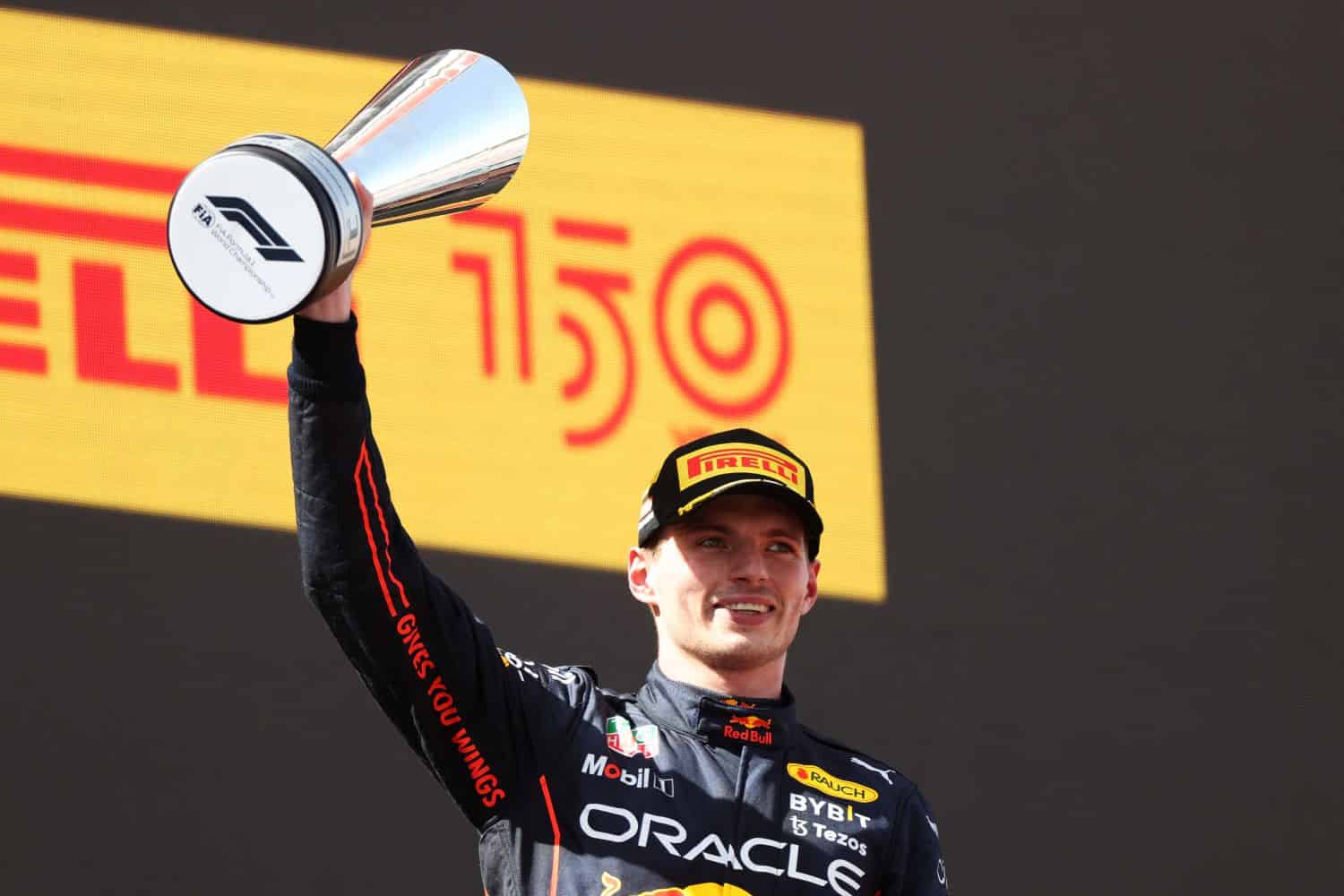 Max Verstappen won Sunday’s (May 22) Spanish Grand Prix after a tumultuous day that featured an early trip through the gravel, DRS headaches and an instance of team orders on the part of Red Bull.

“I tried to stay focused; of course it’s not nice when stuff like that happens,” Verstappen told Pedro de la Rosa.

“But, at the end of course, very happy to win and also very happy for Checo. It was a great result for the team.”

Verstappen followed pole-sitter Charles Leclerc off the line and saw the Ferrari streak off into the distance through the opening laps of the race. Verstappen gave chase until a burst of wind sent him sliding through the turn 4 gravel trap on lap 9.

Leclerc, having looked in control of the race by a metric ton, saw his day suddenly unravel on lap 27. Leading Russell by over 13 seconds, with a winning strategy in hand, Leclerc was suddenly seen going slowly through sector two, reporting a loss of power.

Leclerc was able to drag his Ferrari back to the paddock, collecting his first DNF of 2022 in the process.

Speaking to SkySports, Leclerc revealed that all appeared normal from the cockpit up until the power unit’s sudden failure.

“I don’t know anything more than what happened,” Leclerc said. “I had no indications before, then it just broke and lost the power completely.”

Leclerc’s sudden retirement left Russell leading from Verstappen and Perez. Red Bull opting to split strategies — initially planning to leave Perez on a one stop — left Russell to hang on indefinitely, but certainly out of contention for the win.

Perez inherited the lead when both Russell and Verstappen pitted as the race approached the halfway point, and cycled back to first place following the next round of stops.

Despite Verstappen being behind on fresher mediums, Perez was in legitimate control of the race, with Verstappen hovering two to three seconds behind come lap 48.

With 19 laps remaining, Perez was informed that he was expected to not impede the approaching Verstappen, owing both to Verstappen’s younger tires and the Dutchman’s potential to take the championship lead with a win.

“That’s really unfair, but okay,” Perez remarked before conceding the lead to Verstappen.

Earlier in the race (Lap 26), Perez was running behind Verstappen as the 2021 champion attempted to overtake Russell. While Verstappen was clearly faster than Russell, DRS issues left him struggling to pass the Mercedes.

Perez, on fresher tires, suggested that if Verstappen were to let him by, he would be able to quickly dispose of Russell. Checo’s request was declined.

Perez took home the fastest lap of the race and a second-place finish at the end of the day.

“I’m happy for the team … we have to talk later,” Perez informed his engineer on the cooldown lap.

Despite being let by his teammate for the win, Verstappen’s troubles on the day had not ended when he returned to the pavement from his lap nine slide.

Verstappen’s frustration being stuck behind Russell largely resulted from an unexpected and prolonged DRS failure. Initially it could be seen that Verstappen’s rear wing was not opening in the DRS zones, despite being well within range of Russell.

Next lap, the rear wing opened for a fraction of a second before involuntarily closing again. The next lap, no movement. The next, no issue. Then another lap of temperamental opening and closing, and so on and so forth.

A tail wind blowing down the backstretch kept the DRS functional through sector two, but Verstappen was unable to jump past Russell on track either way.

On the other side of the Mercedes garage, Lewis Hamilton’s race was derailed on lap 1 after contact with a charging Haas car.

Entering turn 4 on the opening lap, Kevin Magnussen tried a sneaky swing around Hamilton’s outside, but was quickly denied when understeer sent Hamilton into the Dane’s right side. Magnussen was sent wide into the gravel, and Hamilton collected a puncture.

After pitting for fresh tires at the end of the opening lap, Hamilton suggested that his team retire the car and save on engine wear.

“I would save the engine if I was you. I’m sorry, guys,” he told his team over the radio.

Nonetheless, the team insisted that points were still on the line. Hamilton’s goal was set as eighth place, which would have paid four points. That in mind, a fifth place and 10 points will be a welcome result for the Silver Arrows, owing to Hamilton’s raw pace on fresh tires throughout the race.

Heading into Monaco (May 29), Verstappen will now enjoy a six-point lead (110) over Leclerc (104). Verstappen has once taken home the gold around the streets of Monaco, while Monegasque Leclerc has yet to finish his home race in three attempts.

The Monaco Grand Prix will begin at 9 a.m. ET on Sunday, May 29, with coverage on ESPN.

The finishing order for the 2022 Spanish Grand Prix is: