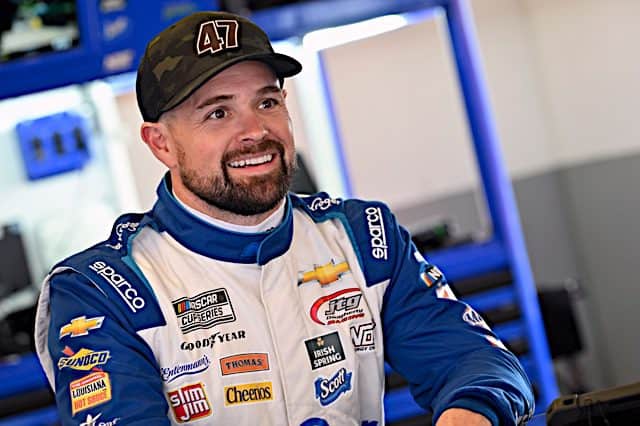 As a result of the team’s increased performance and success in 2022, Trackhouse Racing drivers Ross Chastain and Daniel Suarez will be removed from this column going forward. The column following the Daytona 500 gives a list of the current underdog drivers, which can be found at the bottom.

Let’s just call Ricky Stenhouse Jr.’s first 10 races of the season for what they were: abysmal. Despite a top 10 at Auto Club Speedway, Stenhouse entered the DuraMAX Drydene 400 at Dover Motor Speedway (May 2) sitting 31st in points and on pace for career lows in rank, average start and average finish.

But there was good news for Stenhouse and the No. 47 JTG-Daughtery Racing team: This season is far from over. While the 34-year-old will very likely need a win to make the playoffs, he has the talent to do so. As I argued in last week’s “2-Headed Monster,”  Stenhouse has a tendency to have a breakout race on a non-superspeedway. And, if he had finished one spot higher at Dover, that win would be in the bank.

The Olive Branch, Miss. native ignored his woes thus far to score his first top five of the season, and in a big way. Stenhouse passed Chastain on a restart with less than 60 laps to go to advance to the runner-up position. Despite a challenge from both Chastain and Martin Truex Jr., Stenhouse held them off to finish second to race winner Chase Elliott.

After the race was moved to Monday after 78 laps due to rain, Stenhouse began to creep his way to the top 10. He entered it on lap 131. Different strategies with pit stops led Stenhouse to finish stage 1 in the 12th position. In stage 2, he boosted that by seven positions to finish fifth and earned six stage points.

The final stage is where Stenhouse’s No. 47 The Frozen Farmer Chevrolet really came alive. He quickly worked his way back into the top five, then drove up to third only 12 laps after the stage began.

Just as Stenhouse was about to bring his car down pit road for a green flag stop, the yellow flag waved. Though it caught leaders Kyle Busch and Alex Bowman, Stenhouse got a break and was able to pit under yellow from the second position. That gave him valuable track position to make a run at the lead.

After restarting in fourth on lap 347, Stenhouse moved up to the second spot, where he would remain to earn an impressive finish.

“It was good to have a good run with them and really for our whole shop,” Stenhouse said after the race. “We feel like we’ve been better than where we are right now as a race team. We’ve put a lot of fast racecars together, just haven’t had much to show for it. Really happy with this performance today. It was a tough battle out there. The track was tough. The cars were tough to drive. Our car was dialed in and our pit crew did a fabulous job on pit road. Just came up one spot short.”
https://twitter.com/DustinAlbino/status/1521234673996812289?cxt=HHwWgsCyuYm4wZwqAAAA
Whether it’s from another driver’s mistake, mechanical issues or being in the wrong spot at the wrong time, just about everything that could go wrong has for JTG Daugherty and Stenhouse this season. With rumors circulating about both his and the team’s futures, it was about time that everything went his way. This is a driver capable of pulling off an upset victory, and he will be someone to keep an eye on at certain tracks.
The result bumped Stenhouse from 31st in points to 27th, which is very important if he were to pull off a win in the regular season since drivers must be in the top 30 in points to be eligible.

Erik Jones has impressed in more ways than one to begin the season. He joined Stenhouse in the top 10 with a 10th-place result to earn his fourth top 10 of the season. Last season, he had six in total. After a week in which Jones likely lost sleep after giving up the lead in the tri-oval on the last lap at Talladega Superspeedway, the best thing was to go grab another strong run.

Dover has been a solid venue for Jones in his career, with five top-15 finishes in 10 starts. However, top 10s were kind of scarce for him despite strong runs, as the 10th-place result was just his third at the track. Jones was just on the outside of the top five in the closing stages when a loose handling condition sent him backwards. Still, the Byron, Mich. native was able to muster out his second straight top 10, the first time such an occurrence has happened for him at Petty GMS Motorsports.

While there was optimism for a return to Petty GMS, Jones did speak with FOX Sports’s Bob Pockrass about what his future looks like currently. Runs like the last two weeks can only boost that confidence.

Erik Jones said he has had initial talks with Petty GMS about returning next year and he is happy there but figures it will be a few more months before anything would get done. pic.twitter.com/khNF4YacoC

Justin Haley continues to improve with Kaulig Racing in the No. 31 Chevrolet. Haley matched his season-best finish of 11th after an impressive run. Haley led 19 laps in stage two after staying out during a yellow. Track position was key in the race, and it allowed Haley to lead more laps in the race than he had in his previous 46 starts. Haley continues to gain traction on being a full-time driver and the Next Gen car, earning his third straight finish of 14th or better. It was also his fifth top 15 in the last seven races. While a top 10 has yet to land in his lap, he is building consistency, which will eventually lead to top 10s.

Michael McDowell earned his career-best Dover finish with a 17th-place run. While McDowell didn’t run near the front like the other three drivers mentioned above, he had a quiet but solid run inside the top 20 for a large chunk of the race. The final stage is where McDowell capitalized on his speed, staying inside the top 15 for a while and even getting as high as 10th. Despite a rough start to the season, McDowell and crew chief Blake Harris are continuing to build chemistry, which has led to the No. 34 earning three straight finishes of 17th or better, including two top 10s.

Corey LaJoie is another driver who has been looking to build some momentum recently. After a 14th-place run at Talladega, LaJoie had another strong run going. LaJoie got up to 12th in the final stage using the diamond-style approach in the turns. This is where a driver enters low, drifts up high, then cuts the wheel hard to got a quick, low exit to carry speed down the straightaway. LaJoie was making strong use of diamonding, even battling drivers like Kevin Harvick for position. However, trouble struck with 67 laps to go. Suarez was looking to get around LaJoie for 12th but got a bad angle going into turn 3. He drifted up into LaJoie, sending LaJoie into the wall and Suarez spinning. Fortunately, LaJoie was able to mend some of the pain by rebounding for a solid 18th-place finish. The finish gives the No. 7 Spire Motorsports team three consecutive top-20 finishes after three straight results of 31st or worse.

Ricky Stenhouse Jr. (second): “Our team has been putting together really good racecars. A lot of our good races we’ve had issues. You know we have been good on some of the bigger tracks. Our short-track program is definitely off a little bit, but you know it was an awesome day to get The Frozen Farmer, you know it’s the first time on the car. They are from 40 minutes down the road. Their whole family is here, and we’ve had a good weekend with them.

Justin Haley (11th): “Our No. 31 LeafFilter Gutter Protection Camaro ZL1 was fast at Dover. We led some laps and stayed up front for quite a while until our tires started to go. We struggled a little in dirty air getting super tight, but we were able to rebound and almost got a top 10 out of it. We definitely made some gains today and were the best we’ve been all year.”

AJ Allmendinger (33rd): “Not the day we hoped for in our No. 16 Action Industries Camaro. We had good potential and showed some speed, but we just struggled in dirty air all day. The car was just extremely aero-sensitive and tight. We ran well up front for a while, but unfortunately we lost the brakes and our day ended early.”

One sponsor that’s become an annual sight for Lajoie at Dover is Drydene. LaJoie’s No. 7 Chevrolet carried the Drydene and DuraMax colors at The Monster Mile, featuring a blend of red, white and blue. LaJoie showed a lot of speed throughout the race, and he rebounded from contact with both Suarez and the wall to earn a solid 18th-place finish.

I really thought Kurt would have the car figured out by now. I still think he will, just taking longer than I thought.