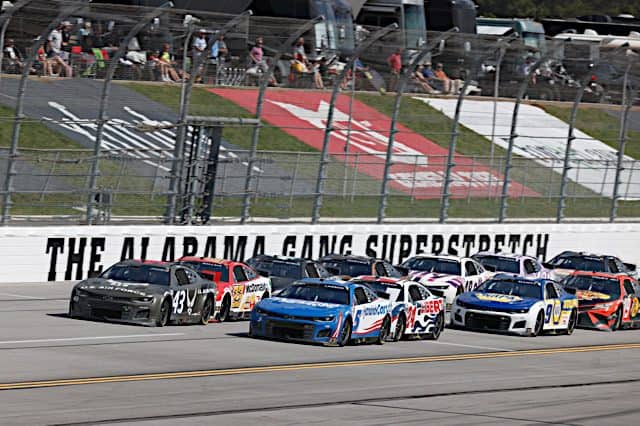 Talladega Superspeedway is a toss-up.

Craziness tends to be the norm. This time, no one ended up on their roof (although Richard Garvie could have ended up there Saturday (April 23) in the ARCA Menards Series race), and you ended up with Ross Chastain in victory lane. For FOX, you had quite the endeavor to get there.

Entering the weekend, the big news for FOX’s broadcasts was that Dale Earnhardt Jr. was going to be in the broadcast booth alongside Mike Joy and Clint Bowyer. Earnhardt is realistically one of the best living drivers ever to compete at Talladega. In the early 2000s, he was so strong at Talladega that everyone else seemed to just bow to his whims.

Earnhardt showed up on FOX’s airwaves almost immediately, appearing on NASCAR RaceDay on FOX Sports 1. Pre-race coverage seems just that much better with the stage setup at the track than what they were doing earlier this season. Less stupidity. On Sunday (April 24), the FOX stage was inside the Talladega Garage Experience. If I were there, I could have sauntered over there to watch since it is a relatively short walk from the media center. That said, next week’s a FOX Sports 1 race, so that likely won’t be back for Dover Motor Speedway.

Having Earnhardt in the broadcast booth Sunday resulted in a different feel for the broadcast. I figured going in that Earnhardt would be somewhere between Joy and Bowyer in the booth. He would be able to bring in more information to help viewers get a better understanding of what they were seeing. It seemed like Earnhardt, even though he was in a guest analyst role Sunday, prepared more for the broadcast than Bowyer did.

Earnhardt tends to notice the little things, like Brad Keselowski and his lock-up issues. The short bite that made air during the final round of stops showed that Earnhardt was definitely keeping track of Keselowski’s issue. Sure enough, it bit him for a second time at the worst possible moment.

Sunday was Earnhardt’s first broadcast opportunity outside of NBC Sports. I believe that he did extremely well. Obviously, he’s known Joy for the majority of his life. I couldn’t tell you when the two of them would have met, but knowing that Joy has covered NASCAR since the 1970s, that probably happened when Earnhardt was in elementary school. They actually work very well together.

I think that’s Rick Allen’s mentality rubbing off on Earnhardt to a certain degree. As Allen told Frontstretch in 2018, he insists upon a friendly atmosphere amongst his boothmates.

At the time, Allen talked at length about Earnhardt’s passion for the sport as being a huge plus for him. To an extent, that passion was on display Sunday. In Earnhardt, you have possibly one of the most knowledgeable and respectful analysts in the sport. He’s been around long enough that he knows what everything means and why it is important to the sport. He’s also the most in touch with NASCAR’s history of any on-air personality in the sport, and that’s probably not even close.

That said, I did have gripes with Sunday’s broadcast. When I wrote about FOX’s broadcast of the Daytona 500 earlier this year, I noted that they used way too many bumper-cam shots.

At Daytona International Speedway and Talladega, everyone runs so close together that you really can’t see all that much. Now, you have the added issue of the Next Gen cars whipping so much stuff up that half the cameras are busted before the race ends. Because of that, FOX (and NBC when it goes to Daytona and Talladega in the second half of the season) need to cut back on their usage.

There were also some zoom issues. The best example I can give is on lap 149, when Chastain executed a nasty block in turn 3 at the last second. Problem was, you couldn’t see what he was doing because the camera was zoomed in too much. That’s not going to work.

Finally, we have the biggest incident of the day, which occurred on lap 90. Joey Logano spun and hit the wall on a restart after contact from Bubba Wallace due to a stack-up situation.

There were some good moments here and bad ones. First off, Bowyer apparently tried to blame the wreck on William Byron, who was trying to sweep down into the bottom lane from the top so that he could get in front of his Hendrick Motorsports teammates Chase Elliott and Kyle Larson. There wasn’t enough replay proof that could have given any credence to this. As a result, it made it look like Bowyer put his foot in his mouth.

Later on, Earnhardt made use of throttle traces and the available SMT data to go back through the restart. This showed that Martin Truex Jr. was using the brake pedal rather extensively at the start-finish line in an attempt to bunch up the outside line. This is why Byron got a big jump and was able to get in front of Elliott. It also created the chain reaction that caused the crash. This is a different look at an incident and something that it strikes me that Earnhardt would do when given the time.

On Saturday, one of the biggest stories was Jeffrey Earnhardt teaming up with Larry McReynolds and Richard Childress Racing for the NASCAR Xfinity Series’ Ag-Pro 300. We’ll have more on that in the Critic’s Annex, but on NASCAR RaceDay, McReynolds’ and Jeffrey Earnhardt’s race day was profiled.

Long story short, Talladega is not necessarily the hardest race for a crew chief to call. Most of the real work is done at the shop ahead of time, and McReynolds really wasn’t hired early enough to truly dive in. That said, it was clear watching it that McReynolds was proud of his former driver’s grandson on Saturday. He did a great job in what was a one-off with RCR. Will it help his career going forward? I don’t know. Maybe.

As we all know, Talladega Superspeedway is known for infield shenanigans. I witnessed some shenanigans last fall myself.

With today's #YellaWood500 postponed to Monday, we'd thought that we provide some atmosphere shots from the infield at @TALLADEGA. pic.twitter.com/rB0dGOpOex

That tweet doesn’t include the women flashing Dustin Lynch (visible in the tweet) during his performance, stripper poles (on which I did not see anyone badly dancing on them) or spewing that I can state that I saw after the Xfinity race. I did have a bunch of people come up to me and claim they knew me, which was really weird knowing that I was 1,100 miles from home.

FOX decided to dispatch Bob Pockrass to The Big One on the Boulevard Friday night (April 22) to take everything in. In addition to his track record as one of the best reporters in NASCAR, he also has a somewhat uptight image (honestly, not dissimilar to myself), so he kind of stood out in his khakis and button-down shirt with the revelers. He spent some time hanging out with those gathered there, but might not have been the most comfortable. Silly, absolutely. The right kind of silly, though.

Sunday’s race actually ended all but on-time since there weren’t any red flags and no truly massive crashes. That said, post-race coverage was fairly brief. Viewers got to see Chastain celebrate with his watermelon smash and got three interviews (Chastain, Erik Jones and Larson). There was also a check of the points and some post-race analysis before leaving for The Simpsons.

One of the primary reasons for the ongoing frontstretch winner’s interviews instead of in victory lane is to get the crowd in on the action. However, this weekend saw that crowd audio curtailed significantly both Saturday and Sunday. We all know why. I don’t need to tell you.

Doing those interviews without the crowd reactions more or less cheapens the whole thing. At this point, you might as well kill that and move it back to victory lane so that it means more once again. It was never particularly a good idea to move the post-race interviews to begin with.

That’s all for this week. Next weekend, the NASCAR Cup and NASCAR Xfinity series will be at Dover for the track’s first race weekend under Speedway Motorsports ownership. ARCA Menards Series East will serve as the tertiary series.

Meanwhile, the NTT IndyCar Series will be at Barber Motorsports Park in Alabama for the annual Honda Indy Grand Prix of Alabama. IMSA’s series will be at WeatherTech Raceway Laguna Seca. TV listings can be found here.

We will have critiques of the Cup and Xfinity races from Dover in next week’s edition of Couch Potato Tuesday here at Frontstretch. For the Critic’s Annex in the Frontstretch Newsletter, we’ll have two entries this week. One will focus on Saturday’s Ag-Pro 300. The other will be on the time-shortened General Tire 200 for the ARCA Menards Series.

I thought Dale Jr. was much better than the racing. HOWEVER, Joy and He should have been given a sizeable check for shilling Chevrolet EVERY chance they got. It was obvious. I know Rick Hendrick will payola Joy, what do you expect from someone who plead guilty to mail fraud in a bribery scheme, and GM should handsomely reimburse Earnhardt.
But he and Clint Boyer were excellent.

There was no racing going on. You can see more entertainment on any freeway in the country. Except for the last 1/2 lap. So you wait 4 hours for 1minute of racing. Get rid of the plates, and the spec. cars. Then we can have a race.

Thank Goodness for Mike Joy and whoever else is in the booth with him other than Clint “I know it all” Boyer. He is so obnoxious and always thumps his chest. Can’t wait for NBC to have their turn. It was great having Jeff, Danica, Tony, and the Crew Chief paired with Mr. Joy.

It was vintage FOX with all three talking over each other for the winning call. Disappointing finish.

One clip I’ve seen, enjoyed and appreciated is the Bubba Wallace in-car shot of the last few laps with the audio between he and his spotter. To hear the calls and see the execution was eye-opening. Shame they can’t factor that into the coverage somehow, someway.