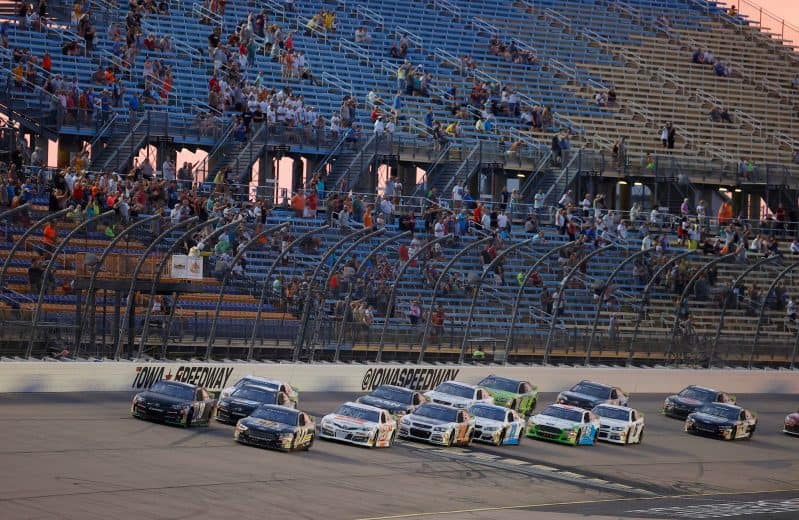 Carson Hocevar came agonizingly close to his first Truck win at the Bristol Motor Speedway dirt track last weekend. After leader Ben Rhodes was forced to pit at the end of stage two, Hocevar took the lead from John Hunter Nemechek at the beginning of the final stage and held off all challenges for the lead for most of the race. But on the final restart with five laps to go, Rhodes fought his way from fourth to the lead, passing Hocevar with just four laps remaining.

The 55 laps that Hocevar led last Saturday night was more than triple his previous high in a Truck race at 17, at Knoxville Raceway in 2021. And if Hocevar is to break into victory lane in 2022, it will most likely come there. In that race, the other dirt event on the schedule, Hocevar had an average running position of third until a late-race spin left him with a 16th-place finish.

Hocevar has been in contention to win the last two races on dirt, and his dirt-racing prowess will only improve as he gathers more experience in the series.

Hocevar has less of a chance at winning on pavement, but he has still impressed in sporadic races. He came close to his first win last year at Charlotte Motor Speedway, but he was unable to run down Nemechek in the closing laps and had to settle for second. In addition to Charlotte, he also scored top-five finishes at Darlington Raceway and Daytona International Speedway last season.

The No. 42 will enter as one of the heavy favorites at Knoxville, and if Hocevar and Niece Motorsports can turn their flashes of brilliance into consistent results, they have the potential to contend for many more.

Of the NASCAR Cup Series drivers who have had a slow start with the Next Gen car, who has the best chance of getting a good finish at Talladega Superspeedway?

The story of the Next Gen car and the 2022 Cup season has been the dominance of the young guns. Seven of the nine races this season have been won by drivers younger than 30, and Tyler Reddick came oh-so-close to making it eight last weekend.

The veterans have struggled to pick up wins through the first quarter of the season, and Denny Hamlin, Kevin Harvick and Brad Keselowski are among the disappointments. Harvick has just three top-10 finishes, Hamlin’s lone top-10 finish was his win at Richmond Raceway and Keselowski has just one top-10 finish and sits 30th in points after a 100-point penalty at Atlanta Motor Speedway.

With Talladega on the schedule this weekend, how good of a chance do these drivers have at picking up a win or a solid finish?

Keselowski has the best chance. He looked like one of the best cars during Speedweeks, as he won a Bluegreen Vacations Duel race and led a race-high 67 laps at the Daytona 500 before finishing ninth. Keselowski has also shown steady improvement throughout the season, as he has put together a string of five consecutive top-20 finishes since Atlanta. If his car at Talladega was as good as it was at Daytona, he will be a major player.

Hamlin has lacked speed in 2022 outside of the races at Richmond and Las Vegas Motor Speedway, and it has been hard to gauge his superspeedway abilities with the Next Gen car, as he was taken out in crashes at Daytona and Atlanta. But Hamlin has a great superspeedway record just like Keselowski, and it will be hard not to picture him contending for the lead unless he is taken out in another accident.

Harvick has a chance to fight for the lead on Sunday, but he hasn’t been a consistent winning threat at superspeedways in a long time. His last win at Daytona or Talladega was in 2010, and while he led the most laps in the rain-shortened Talladega race last October, he has just two top-five finishes at Talladega in the last decade.

A win, while improbable, isn’t impossible for Harvick, and a top-10 finish would be an excellent result if he can survive the wrecks and put himself in a good position for the closing laps.

North Wilkesboro Speedway and Speedway Motorsports, Inc. announced that the track will reopen for racing this year, with a Truck date eyed for 2024. If money was no issue, what other tracks would make good additions to the top three series?

The track ran into financial problems in 2009, with the Xfinity date transferred to Road America in 2010. However, the track is beginning to make a comeback. The ARCA Menards Series raced at the track in 2021, marking the first NASCAR-sanctioned race at the Mile in 12 years. Milwaukee is once again on the ARCA schedule for 2022.

While it wouldn’t make sense to race in Cup or Xfinity with Road America on the schedule, why not give Milwaukee a Truck date in order to create a Wisconsin triple header? With Saturday and Sunday afternoon races at Road America, the Truck Series can race at the Mile on Friday or Saturday night for a action-packed weekend of fun in the Badger State.

It’s only been off the schedule for three years, but it would also be nice to see Iowa Speedway return. NASCAR’s schedule would be boosted by more short tracks, and the 0.875-mile short track in Newton, Iowa, always put on exciting races during its 11-year run in the Xfinity and Truck series.

NASCAR continues to race at Iowa today in ARCA, and the NTT IndyCar Series has returned to Iowa in 2022 for a double header. If the funding can be put together, Iowa would certainly be welcomed back.

For another short track, South Boston Speedway in South Boston, Va., was an Xfinity and Truck venue that was used between 1982 and 2003. At .400 miles, it would be the shortest track in NASCAR if it were to return. The track will make its debut in the SRX Series in 2022, and if all if goes well, a Truck-SRX double header would certainly be a big draw.

For a unique proposal, a NASCAR race at Lime Rock Park would be fun to watch. Located in Lakeville, Conn., Lime Rock Park is a seven-turn road course that is just 1.530 miles in length. While road courses generally have one or two long straightaways, each turn in Lime Rock is one after the other, and it would create a unique and fascinating challenge for the drivers.

Finally, NASCAR would benefit from running an international exhibition race. While a return to Autodromo Hermanos Rodriguez in Mexico City or a return to Circuit Gilles Villeneuve in Montreal would make the most sense, why not try somewhere new?

NASCAR first raced internationally in 1988 at the Calder Park Thunderdome in Melbourne, Australia, and it returned overseas to Japan from 1996 to 1998, with the 1996 and 1997 races held at Suzuka Circuit and the 1998 race at the oval circuit of Twin Ring Motegi.

NASCAR is looking to expand its market, both domestically and internationally. And whether they’re at a road courses or ovals, international exhibition races would help broaden the appeal of NASCAR to a wider audience.

Will AJ Allmendinger win his first superspeedway race at Kaulig Racing in 2022?

Since 2019, Kaulig Racing has won 15 races in the Xfinity Series. Of those 15, six of them have come at Daytona and Talladega. Those six wins were split among three drivers.

AJ Allmendinger is not one of them. In fact, Allmendinger’s nine Kaulig wins account for every win that wasn’t at Daytona or Talladega. Time and time again, Allmendinger has consistently been the one guy left out in winning at Kaulig’s bread-and-butter tracks.

If Allmendinger is to win on NASCAR’s fastest tracks in 2022, his best opportunity will be in August at Daytona, as his biggest near misses have been at that track.

Allmendinger’s results at Talladega, while not as good as his results at Daytona, are still formidable. Allmendinger’s best finish at Talladega with Kaulig is a third in the rain-shortened 2021 spring race, and in the 2020 fall race, he led 24 laps before once again getting taken out in a last lap crash.

Allmendinger may not be the favorite heading into this weekend’s race at Talladega, but just like every Kaulig car, he will be one to watch on Saturday.

I’m encouraged that management has finally shaken up the schedule from the boring parade of 1.5 mile cookie cutters they locked themselves into, when they could sellout anywhere.

I’ve long been a fan of expanding road courses, & that thinking has finally caught on. The easiest way for them to expand to new territories would to rotate road course dates, to new venues, maybe even back to Canada with Cup this time.
One of the limiting factors for any new track is seating. With a road course that isn’t a factor all fans need is a blanket or lawn chairs & pick their spot.

One thing that I don’t want to see is a street race, yes it can bring them to new locations. But the layout, & racing is usually pretty compromised.

I would love to see the trucks run at the Milwaukee Mile. It seems the trend with track promoters is moving the opposite direction though with them wanting the truck/Xfinity Saturday double header. But it would be great. Iowa is a long time favorite, but given the rumor NASCAR wanted to sell it prior to their lease deal with Penske, it would seem a strong crowd for IndyCar might be the only way to re-open that discussion. Especially with years of financial struggles there & the state backing out of a deal to help fund improvements shortly after NASCAR took ownership. Lyme Rock is a beautiful track & one I’ve been to many, many times. The old Busch North Series ran there at one point I believe. There’s next to no motels/hotels nearby, & few places to eat. To say there would be strong pushback from the locals would be an understatement, for a large event. I think there’s a reason why we won’t likely see these facilities on the schedule any time soon. It seems to me that this year’s Clash taught NASCAR that they can enter a large market without the need for an existing track. But it’s nice to dream. All good choices.