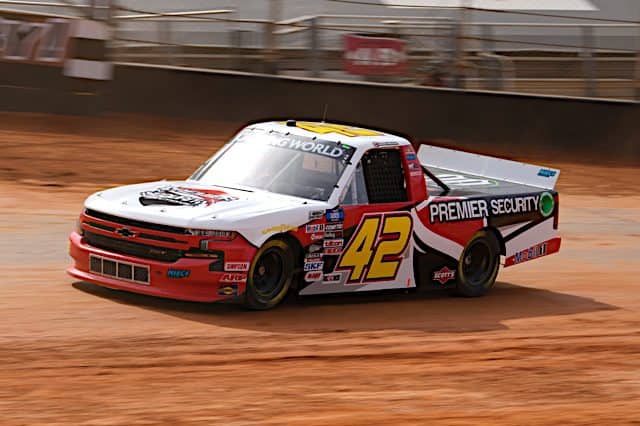 But a late-race caution, combined with a hard-charging Ben Rhodes was enough to end the night in heartbreak for the sophomore driver.

“I could’ve cried. I knew I was going to cry whether I won or lost,” Hocevar said when asked about hanging his head after getting out of his truck. “It’s a pansy thing to do but this sport’s hard and you don’t have those close moments too often.”

Hocevar took the lead at the end of stage two and held it through four restarts, despite being challenged by John Hunter Nemechek multiple times, before ultimately losing the top spot to Rhodes. The driver of the No. 99 Toyota had led stages one and two flag-to-flag and was forced to run from deep in the field after pitting at the end of stage two. After spending most of stage three working his way through traffic and multiple yellows, Rhodes took the lead for the final time with just four laps remaining.

But did Hocevar have anything for Rhodes in those final four laps?

“I mean either ripped the top or crashed him,” Hocevar told FOX Sports 1 after the race. “I hate saying that but it’s part of this racing, right? I couldn’t really compete with him. He just had better tires and he was the fastest truck all day.

“Second just sucks. It’s terrible… especially with being that close,” he continued. “We have Bryan Clauson’s logo on the car, I’m wearing the shirt still. I was hoping to be able to give him tribute but he was definitely with me tonight.

“Hopefully, Tim (Clauson) and everyone that he really touched was really happy seeing that BC out front again. Just close. He (Bryan) was definitely with me tonight running that thing as hard as we were.”

But despite the disappointment and the close call, the sophomore driver believes his team is “a lot closer” to finding its way to victory lane.

It was a better truck driven by Ben Rhodes that beat Carson Hocevar and not tires, but if he could do it over again, he knows it would probably have taken wrecking him to win.

Hocevar’s third top 10 in six races moves him to ninth in the championship standings, 95 points behind leader Rhodes heading into a pair of Truck Series off weekends. The series returns to the track Friday, May 6 at Darlington Raceway. Coverage for the Dead On Tools 200 begins at 7:30 p.m. ET on FS1.