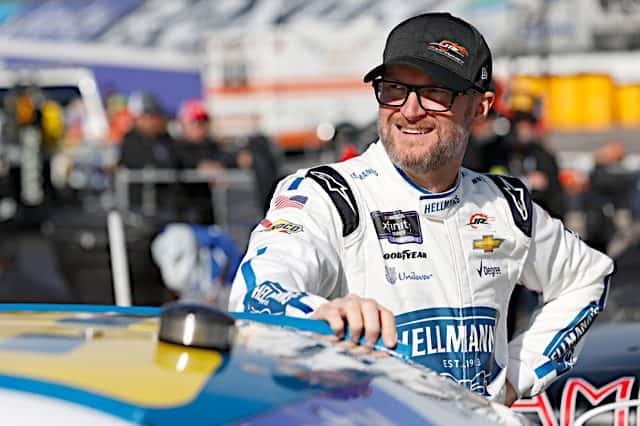 Ryan Blaney has led the most laps through the first seven races of 2022. Will Martinsville be the race where he finally breaks through with a win?

With the amount of parity through the first seven NASCAR Cup Series races of the 2022 season, it’s difficult to say who has been the best driver. But if there has been a fastest driver, it would be Ryan Blaney.

Blaney has won three poles in the first seven races with an average start of 4.1. He has led the most laps (334) of all drivers this season, and has had an average running position inside the top 10 for every race except Las Vegas Motor Speedway, where he was taken out in an early crash.

Blaney also led the most laps at Phoenix Raceway and Richmond Raceway, the latter of which he had just one top-10 finish and zero laps led in 11 prior starts. And with his seventh-place finish last weekend at Richmond, Blaney is now tied for the Cup Series point lead with Chase Elliott.

Martinsville Speedway has historically been one of Blaney’s best tracks in the Cup Series. Will he pull off the win and make it eight winners in eight races?

Even if he doesn’t seal the deal, he will be one of the best cars. Blaney finished runner-up in both Martinsville races in 2020, and in the spring of 2021, he led 157 laps before a late speeding penalty relegated him to an 11th place finish.

Blaney’s qualifying has been his strongest asset in the 2022 season, and with three poles in the last three qualifying sessions (qualifying for Atlanta was rained out), it would not be a surprise to see him make it four in a row.

Martinsville has also favored strong qualifiers in recent years, as 11 of the last 13 Martinsville races saw the winner start inside the top 10. And if Blaney can start up front and stay up front, it would be hard to bet against him.

See also
Did You Notice?: The Cracks in the NASCAR Point System?

Denny Hamlin’s win at Richmond marks the first for Toyota in the 2022 Cup Series season. Will this be the spark that turns Toyota’s season around?

It had been a nightmare of a start for Denny Hamlin in 2022, as he had zero top-10 finishes and sat 22nd in points after the first six races. But all of those frustrations were washed away at Richmond after Hamlin and the No. 11 team used tire strategy to their advantage and overcame a 14-second deficit in the final 25 laps in order to score their first win of the season.

The win was also the first for Toyota in the 2022 season, as Joe Gibbs Racing and 23XI Racing have had early struggles with the Next Gen car. Are the Toyota teams back, or do they still have work to do in order to catch up to Ford and Chevrolet?

While Richmond last weekend is a start, it would be too soon to say that Toyota has nothing to worry about. In fact, the result was almost expected despite their struggles, as Richmond has been a track dominated by Joe Gibbs Racing in recent years. Since the Fall of 2015, only four Richmond races have been won by non-JGR drivers: Joey Logano in the spring of 2017, Kyle Larson in the fall of 2017, Brad Keselowski in the fall of 2020, and Alex Bowman in the spring of 2021. And of the four they didn’t win, a JGR driver led the most laps in three of them.

Richmond last weekend now joins Las Vegas as the two races where the Toyota teams were a serious threat to win. In the other five races, however, they were predominately absent at the front of the field. Thus, while the Richmond triumph gives them reason to celebrate, there is more work to be done in turning its slow start around.

One of the biggest stories in the middle of the Cup race at Richmond was the altercations between Blaney and Ross Chastain that occurred while they were racing in the top 10. While trying to pass Chastain in the middle of stage two, Blaney got loose and sent him up the racetrack. Chastain then responded by immediately moving him out of the way, and Blaney then moved him back out of the way at the beginning of stage two.

Blaney wasn’t pleased with Chastain over the radio and later made his displeasure known after the race was over. This incident came just one week after Chastain’s aggressive moves to win his first Cup race at Circuit of the Americas, and an argument could be made that Chastain is becoming too aggressive for his own good.

With that said, neither driver did anything wrong at Richmond. Chastain voiced his displeasure with a bump, and Blaney responded in turn with one of his own. Neither driver spun, neither driver was taken out of the race, and both drivers were able to continue on with their days after the contact was over.

But for both Blaney and Chastain, it would be preferable for them to not escalate tensions or spark controversy if it can be avoided. Because while the other drivers are not their friends, it would be a mistake to turn them into enemies.

Dale Earnhardt Jr. makes his return to the Xfinity Series. Where will he finish?

Ever since his retirement from full-time racing at the end of the 2017, Dale Earnhardt Jr. has made an annual start in the Xfinity Series for his JR Motorsports team. This weekend’s race at Martinsville marks his return to the series, and he will be looking for 25th career Xfinity Series win and his first since 2016. How good are his chances?

Winning the race will be a tall order, but he certainly has the potential to at least compete for a top 15 or top-20 finish. In the four Xfinity races since his retirement, Junior led the most laps at Richmond in 2018 and recorded top-five finishes in his three starts from 2018 to 2020. Last year’s race at Richmond marked his weakest performance of the four, as he finished 14th after being a non-factor all day.

However, Junior had the 30th fastest time during Thursday’s (April 7) qualifying session. He is driving for a part-time team, and while it’s possible that the team isn’t up to speed yet, it will be an uphill climb for Friday night. With that said, there is ample evidence to believe that Junior will be faster during the race.

JR Motorsports also swept the Xfinity Series races at Martinsville in 2021, as drivers Josh Berry and Noah Gragson won the spring and fall races, respectively, with both drivers leading the most laps in the process.

The team is off to a hot start in 2022, as Gragson has been flirting with the points lead and all four drivers have been running up front. And if the team’s Martinsville dominance continues, it would not be surprising to see Junior finish in the top 15 or even the top 10.