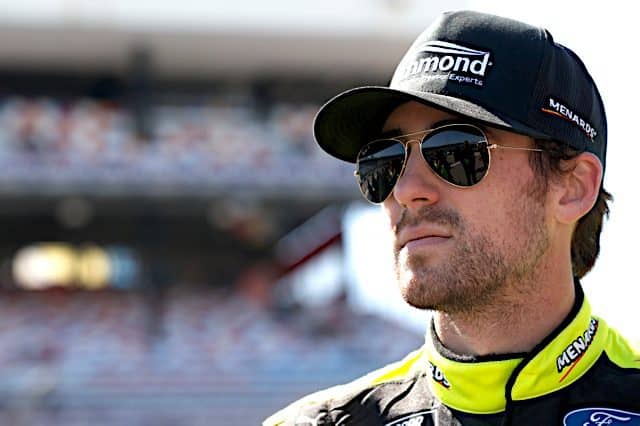 Then, it seemed like it was William Byron‘s day.

In the end, neither won the race, but Blaney rebounded in a fading No. 12 Team Penske Ford Mustang to finish seventh in the Commonwealth.

“It was tough,” Blaney said after climbing out of his car. “There were a handful of cars that could kind of run through lapped traffic pretty good. We weren’t really good at going through lapped traffic, we lost track position, but it’s nice to win a stage […] get a top 10 here. Overall a fun day, frustrating because we were running so good early. Wanted to run better, but can’t complain about it too much, overall not a bad day. Just [need to] find a little bit more, but it was nice […] to have a decent run at Richmond.”

“[…] I kind of got loose and washed up halfway and never touched him. [Then I] went down into [turn] 1 and he just decided to send me. So, on the next restart, I sent him.”#NASCAR #ToyotaOwners400 pic.twitter.com/ErWw0glGIH

It wasn’t just a good run at Richmond; for Blaney, it was a career best. He has steadily improved at Richmond after a run of notably subpar finishes, never ending up in the top 15 in his first nine starts there. The last three races, however, have featured results of 11th, 10th and seventh.

Saturday marked Blaney’s third pole of the season as well, posting the fastest lap time and outrunning eventual winner Byron in qualifying. It was also his second consecutive race rolling off from the front of the grid after winning pole at Circuit of the Americas last week, continuing his upward trend at a track notorious for frustrating the Team Penske driver.

“I don’t know,” Blaney said of why his Richmond performance improved even further on Sunday. “It’s hard to kind of tell, this new car — if it suits me better here, I don’t know. I think it’s a little bit of everything: the car, we just kind of figure out what the heck I got to do here to run better and I still got a lot of figuring out to do, so a little bit of everything. Figuring out what we need to do to kind of hang on here maybe kind of study some stuff, so it’s kind of all over.”

The driver of the No. 12 had a couple of run-ins with Ross Chastain earlier in the race, being moved by the No. 1 in the corner.

"I'll be smart. He f***ing thinks he can do anything he wants."
Ryan Blaney on possibly paying back Ross Chastain after earlier contact between them

“I was inside of him in [turn] 3 and I kind of got loose and washed up halfway and never touched him,” Blaney said. “[Then I] went down into [turn] 1 and he just decided to send me. So, on the next restart, I sent him.”

It didn’t escalate from there, though, and Chastain finished a distant 19th. Neither driver was close enough to the other for things to spiral further.

Blaney struggled to carve his way back through the field after that, his car fading as the afternoon wore on and the sun started to set. Seventh wound up being the best he could do.

“I don’t know, the track might’ve fallen off from us a little bit,” he said. “I thought we were a little better when it was hotter and full of sun, but it’s kind of hard to tell whether it’s the changes you make, maybe you don’t go the right direction or the track changes on you. It’s kind of hard to tell, you just kind of got to look back and see what you could have done better.”

Send him into the wall, that’s as plain a lesson as you can teach him. I think the garage will duly note it too.