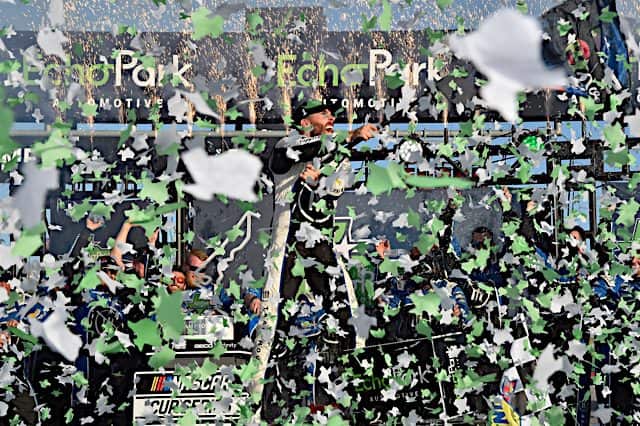 AUSTIN, Tex. – The NASCAR Camping World Truck Series race on Saturday (March 26) saw three drivers heading into the same corner while gunning for the lead with two laps to go.

Clearly, the racing gods decided that this was not enough excitement for one race weekend, as the final lap of the Cup race featured Ross Chastain, AJ Allmendinger and Alex Bowman heading into the penultimate corner for the win in the EchoPark Automotive Texas Grand Prix at Circuit of the Americas.

Chastain, the dominant driver of the race who was seeking his first career NASCAR Cup Series win, found himself running third heading into the final turns of the race. He had taken the lead from Tyler Reddick in overtime and began to build a comfortable margin.

But through turns 11 and 12 on the final lap, Chastain conservatively drove through the corners and allowed Allmendinger and Bowman to catch up and pass him. Chastain remained close, however, as he was just a car length behind the new lead duo. However, the final lap was winding down, and Chastain’s chances at the win were beginning to slip away.

Heading out of turn 18, Chastain bumped Allmendinger down the straight in order to pass him through turn 19. Instead, the bump sent Allmendinger into Bowman. While Bowman went wide and developed a tire rub, Allmendinger went spinning into the gravel trap. When the dust had settled, Chastain cleared Bowman and cruised to the finish line for his maiden Cup Series win.

Chastain’s win made him the third first-time winner of the 2022 Cup Series season, joining Austin Cindric and Chase Briscoe. It was also the first time since 2001 that there were three first-time winners in the first six races of a season.

In addition to the race being Chastain’s first win, it was also the first win for Trackhouse Racing and crew chief Phil Surgen.

“I’m just proud of everybody that committed,” team co-owner Justin Marks said. “Every single one of these people, they own a piece of this victory.

“We were all huge believers in Ross’ talent, we knew what he was capable of doing and he’s proved it the last month at Trackhouse,” Marks continued. “And I really think we’ve just opened the door for him and Phil and the [No.] 1 team moving forward. I’m just really proud of everybody, Chevrolet, ONX Homes, iFly, Advent Health, and everybody that contributes to this program, it’s just a really, really great day for us.”

“We knew we had a really strong car all day and Ross’ restarts were really good,” Surgen explained. “Tyler [Reddick] got by us in one of those restarts late and we had to fight back for the lead. And to come back and fight for the win with AJ, one of the best in the business, was great and that was last lap was just crazy. Going for the win on the last lap, everything’s on the table and they muscled around, and we prevailed.”

Chastain had an exuberant celebration at the start-finish line, which included his signature watermelon smash after winning a race.

“I can’t believe I still have a voice, honestly,” Chastain said. “My right hand hurts from high-fiving and hugging people and slapping people. My back is probably bruised from all the punches I got in the back, slaps.”

He was also emotional, as his mother and his younger brother Chad were both present at the racetrack to celebrate with him.

“That [seeing family] was the closest I came to crying after the race and just now just thinking about how she doesn’t get to come to as many [races] as she wants to,” Chastain said. “She’s a traveling nurse, so she’s working an assignment now in North Georgia doing what she wants to do, right? She likes to take care of people, and she wants to save lives, and she’s worked through COVID and never backed down and has actually saved lives.

“For her to take time out of her schedule to come and to work her work schedule around to be here, it’s not lost on me. Chad comes and spots, and hopefully gets to race a little more. And we’re just racers. So I wish dad was here, wish a lot of people were here, but that’s not how the world works.”

But through the celebration, Chastain also took the time to acknowledge the implications of his aggressive move.

“I’ve cost AJ (Allmendinger) a win at Daytona in the Xfinity Series, and he was obviously a quarter-mile away from winning here. He has taught me a lot, and I’m sure that our friendship will hurt for this. I feel like I had started to win some of his friendship back, and just being nice to each other when you see each other. It took a while.

“I hate that because I’ve lived through that in my career for 12th place in Xfinity. I’ve fought, and I’ve roughed people up and gotten into people. I’ve wrecked Justin Marks. He was going to win Road America in 2016, 2017. I wrecked him and James Davison for no reason. It’s not lost on me that I make some of the same mistakes. It’s just staring down a Cup Series win. I just couldn’t let that go.”

Bowman had to settle for second place, and although he was disappointed about losing the race, he understood Chastain’s dilemma.

“Yeah, I did [think I had the win],” Bowman said. “But I’ve been on other sides of that. I would’ve done the same thing if I were Ross going for my first win. At a hard place to win, like a road course, he may be a pain in the ass to race with and we may have been on the wrong end of that deal, but I’m proud of him, I train with him during the week. Genuinely, extremely happy for him.

“I tried to race them as clean as possible and kind of just let them do their thing and pass both of them. Kind of work out perfectly until [Chastain] got into [Allmendinger].”

For Allmendinger, what was looking to be a top-three finish at the minimum instead turned into a 33rd-place finish off the lead lap. He was understandably upset with how the final lap went down.

“Everybody’s got to be comfortable with the move they make and look in the mirror,” Allmendinger said. “Everybody’s different on what they view, and you can’t judge a person for that. At the end of the day, I’m just proud of everyone at Kaulig Racing for bringing a fast Action Industries Chevrolet. Had to start at the back, drove to the front; if it had been a long run, it would’ve been ‘game over, nobody’s going to touch me’. You know the moves are going to be made at times, and whether I’m okay with it or not, it doesn’t really matter.”

With that said, Allmendinger did offer his opinion on the move.

Allmendinger’s comments on the move had a hint of irony, as he was praising Chastain’s driving ability the day before.

“Ross was doing an amazing job you know and especially in that [No.] 92 car, he’s so good right now,” Allmendinger said during his Xfinity Series race-winning press conference. “So I think it’s going to be tough to beat him.”

Little did he know….

I used to play a lot of Billiards, & Chastain’s move would of been called a “two ball combination.” I didn’t particularly like it, but I understand it. I think it’s fair to judge him on his entire race, not just the final move that defined it. For that I’d give him an A-.
He just needs to remember he’s going to be racing with these same guys for a long time. And they have long memories.

The basis of my view on this and many other “overtime” wins comes from my opinion that the GWC overtime rule isn’t fair. I preferred when the race would end under caution. It has a higher probability of rewarding the driver that deserved the win based on how the entire race was run. The GWC-OT rule raises the crapshoot factor and with it the probability that someone less deserving will steal the win as a result of the final restart (or in many cases multiple restarts). It takes the win away from the driver that deserves the win and arbitrarily gives it to someone else in the name of entertainment.
So with that in mind, I don’t care what the driver that deserves the win does in those overtime laps to ensure they keep the win because in my mind, that second place driver should have never gotten the chance to win on a crapshoot restart after the race should have been over. Without that final caution/restart I don’t think Almendinger would have caught Chastain.

I generally don’t have a problem with paybacks, or bumping and shoving, especially on short tracks and road courses. Unfortunately, Chastain seems to run over a lot of people. Sooner or later someone will pay him back big time, and it will be interesting see how he handles it.

Chastain is starting to look like a modern day Ernie Irvin. Got plenty of talent but can’t stop causing wrecks.

I didn’t care for the fact that Chastain clearly drives into Allmendinger’s bumper and continues to push on the bumper as they’re moving through the curve. No one should complain about giving him a nudge to see if it would move him enough to pass. I think this went over the line of what’s fair. By the way, I don’t have a favorite between the two — I like both of them since they come from two of the smaller teams.