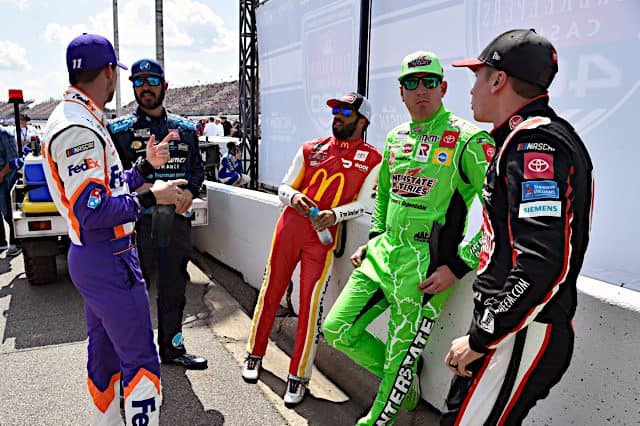 NASCAR’s Cup Series is about to go short-track racing. The next three events on the Cup tour will all be at tracks less than one mile: Richmond Raceway, Martinsville Speedway and the second trip to the dirt version of Bristol Motor Speedway. This trio of races should offer up plenty of action for fans.

For Joe Gibbs Racing, the upcoming short track swing is the perfect opportunity to turn their season around. Through the first six races, it’s been a rough start for all four of the JGR drivers. Consider that Christopher Bell’s third-place finish at Circuit of the Americas (COTA) on Sunday was only the second top-five finish for JGR all season. Not to mention that, even with the top five, Bell only moved up to 23rd in points.

Kyle Busch has JGR’s only other top five, a fourth place finish at Las Vegas Motor Speedway. Busch had a chance to get another one at COTA, but a last-lap spin sent him tumbling down the running order to 28th at the checkered flag. Martin Truex Jr. clawed his way to a seventh-place result. And although Denny Hamlin won stage two, he was never able to recover from a late-race spin of his own and placed 18th. Hamlin finished in the top 10 25 times in 2021, but he does not have a single top-10 result this year and currently sits 22nd in points.

The good news is that Richmond has been one of the team’s strongholds for more than a decade. Of the last 25 races at Richmond, 14 have been won by a JGR driver. Truex and Busch alone have won five of the last seven, and either would be a great pick to win this coming weekend. Truex should be considered the favorite on the strength of six straight top-five finishes, including three wins.

But even Truex’s recent success cannot match Busch’s career record at Richmond. In 32 starts at the three-quarter-mile track, he has earned six wins, 18 top fives and 25 top 10s. In addition, he’s never failed to complete a Richmond race, has only finished worse than 20th once and has completed every lap of every race he’s ever run at Richmond, except one event when he finished one lap down. You can decide which of those stats is most impressive, but it goes without saying that Richmond is one of Busch’s very best tracks.

More than anything else, Hamlin and Bell need to concentrate on running complete races and getting good finishes. Richmond is a great place to do that for Hamlin, who has finished in the top five in eight of his last 10 Richmond races. If Hamlin can count on any track for a strong performance, Richmond is the place. Bell’s history at the track is not nearly as long as Hamlin’s, but he has posted two top fives there in just three starts. No doubt the Nos. 11 and 20 teams have Richmond circled on the calendar.

Martinsville will be another good opportunity for JGR, albeit a bit more challenging. Hamlin has been battling the Hendrick Motorsports drivers for Martinsville victories practically his whole career. The most recent episode ended with Alex Bowman spinning Hamlin out while the two of them battled for the lead in the final laps. Hamlin left Martinsville heated that day and perhaps more anxious than ever to get back to victory lane. Although his last win there was in 2015, Hamlin has won five times at Martinsville. He is also a frequent front runner at the famed short track, leading laps in 24 of his 32 starts there. With legends like Jeff Gordon and Jimmie Johnson no longer in the field, few drivers in the Cup Series today can boast a Martinsville record like Hamlin’s.

Busch and Truex were not strong at Martinsville early in their careers, but they have made up for it over the last six seasons. Busch’s two wins at Martinsville came during a streak of eight straight top-five finishes from 2015-2019. He has cooled off at the Paperclip since then, although the No. 18 did return to the top five in last year’s Martinsville playoff race. Perhaps Truex is once again the favorite because he and JGR have been a match made in heaven at Martinsville. In six starts in a JGR Toyota, Truex has three wins and five top fives. Martins-ville, indeed.

That leaves Bristol’s dirt race, which is going to be more of a wild card. Much like the inaugural event, a lot will depend on who can hit the setup closest in practice and make good adjustments throughout the race. Yet JGR should not be far off the frontrunners. Truex did not finish well but he did lead the most laps in last year’s main event. He also dominated and won the Truck Series race. Hamlin had a shot to win last year as well, but he couldn’t get past Joey Logano in the final laps. That was one of several races that got away from Hamlin in 2021, but he did score a top-five finish.

Bell and Busch both got tangled up in accidents in the last Bristol dirt race. However, this year’s event is still a good opportunity for both of them. Bell is a highly experienced dirt racer and should feel right at home when many of his competitors will be out of their comfort zones. And even on a dirt surface, betting against Busch at Bristol feels like a bad bet.

JGR has obviously had a difficult start to 2022. Compounding its issues are the six different drivers who have won the six races this year, including first-time winners Austin Cindric, Chase Briscoe and now Ross Chastain. Playoff spots are filling up fast. But if history is any guide, JGR will get back on track during the short track swing. The next three races are the best opportunity yet for Truex, Busch, Hamlin and Bell to climb the points standings and score victories. If the Gibbs drivers cannot secure good finishes at their best tracks, then it will be cause for concern.

Toyota seems to be having trouble this season. If all the chassis are the same is it a h.p.thing?