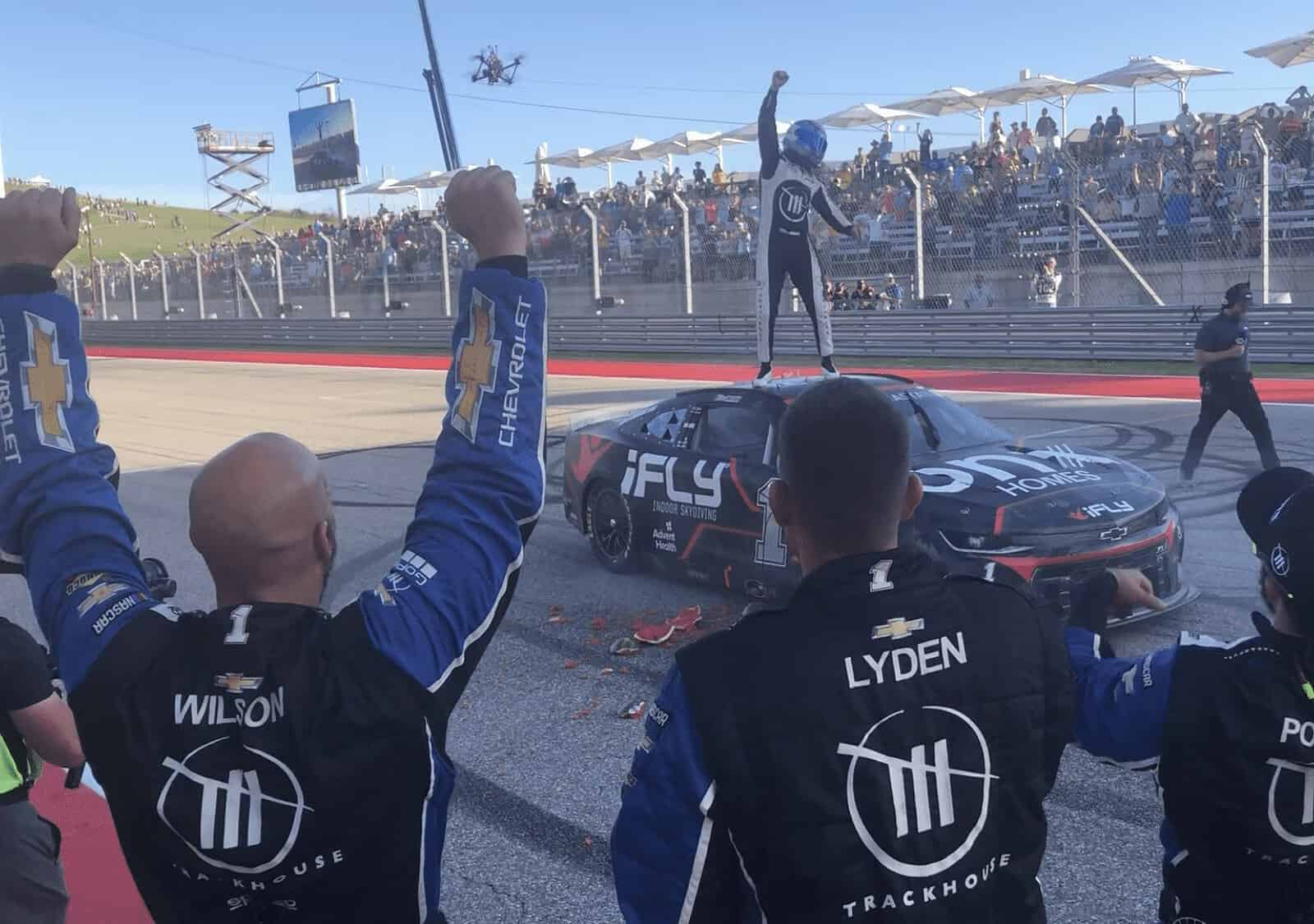 Of all the characteristics associated with NASCAR, the absence of sound is not one of them.

However, with the exception of momentary bursts of verbal encouragement and dismay, the crew members in the pit box of Trackhouse Racing’s No. 1 team were dead silent during the final lap of Sunday’s NASCAR Cup Series race.

It helps when the race track in question – Circuit of the Americas – is a very large 3.410 miles in length. You’d never know a field of 33 stock cars was racing at one end of the facility.

The team of Ross Chastain, including team co-owner Justin Marks, silently watched on a TV as Chastain went door-to-door with road course ace AJ Allmendinger and Alex Bowman in an overtime finish.

Allmendinger and Bowman were Cup winners. Through 120 starts, including three consecutive podium finishes entering Sunday, Chastain was not.

On the screen, miles away from a potential victory, Chastain’s method of racing reflected his 11-year journey as a NASCAR driver, doing anything and everything to keep the dream alive, and making a few enemies along the way.

The silence came to an end and the celebrating began when a shove from Chastain to Allmendinger’s rear bumper sent the latter sliding into Bowman’s car in turn 19. Allmendinger lost control and became beached in a sand trap. Bowman went wide off the turn.

Chastain would not be denied.

Justin Marks jumped on the pit wall. His right arm draped around a crew member’s shoulder, he raised his left and shook a celebratory fist as Chastain roared through COTA’s frontstretch canyon.

Water was sprayed in the air as the 41-year-old Marks joined a group embrace with his team, bouncing around in jubilation. Marks then scrambled onto the pit box. He had more embraces to give out.

In just its 42nd race in existence, Trackhouse Racing was a Cup winner.

“It’s amazing,” Marks told Frontstretch as he and the rest of the No. 1 team waited for Chastain’s 3.41-mile victory lap to end. “This project was an ambitious one and I asked a lot of people to believe. Every single man and woman that works for Trackhouse right now, they believe. And this is for them, they own a piece of it.”

Marks, a former NASCAR driver himself whose only win came in the Xfinity Series at Mid-Ohio, took “personal pride” in Chastain’s victory.

“When I was running road courses in the Xfinity Series, Ross was running about 20th every week coming to me after practice sessions for advice,” Marks said. “I watched Ross develop as a road course racer into truly the class field I think today at the Cup level at a difficult place like COTA, so I’m just proud of him.”

His message to Chastain when he finally talked to him amid the chaos of celebration?

“It was always you, you were always the driver of this 1 car,” Marks said.

The first smashed watermelon of Ross Chastain’s NASCAR Cup career did not come from his family farm in Alva, Florida. Instead, it was purchased at a supermarket the week leading up to COTA.

As wind gusts blew the green and white Texas-shaped confetti that covered the race track, Susan Chastain, wearing a shirt and backpack with her son’s name on it, explained why he’ll have to wait to smash a Chastain-produced watermelon. It’s the reason her husband, Ralph, had to celebrate with their son over Face Time as the celebration unfolded.

“He’s at the farm,” Susan told Frontstretch. “So they’re in the middle of plantings. The watermelons are about 60% done. … It’s kind of a critical time for the farm. They’re about a month outside harvest.”

Right now, the watermelons are about the size of a cantaloupe.

“Not quite ready for this,” she added. “A little bit later in the year, May-ish, they can be ours.”

.⁦@RossChastain⁩ Face Times with his dad back home in Florida after his win today.#NASCAR pic.twitter.com/sLVeQyngxo

In this moment, the origin of the watermelon doesn’t matter to those celebrating.

Ty Norris, the president of Trackhouse Racing and Marks’ right-hand man since the team’s inception, eagerly bit into a chunk someone picked off the ground and held out to him.

“I didn’t care, it tastes like COTA, that’s what I was going for,” Norris told Frontstretch. “I expected Ross to give them hell at the end and he did and I just told Alex Bowman ‘I’m glad you were there to harass (Allmendinger) and he did. Incredible moment.”

Norris is a long-time NASCAR team executive. That history dates back more than two decades to his time as right-hand man to another racer turned Cup team owner: Dale Earnhardt.

What did it mean to him to see the No. 1 car, once driven by Steve Park in the early days of Dale Earnhardt Inc., win again?

“That was our first number,” said Norris, who paused and became a little emotional. “I forgot about that.”

After stepping away for a moment, Norris collected himself.

“It’s how we started one legacy and now we’ll move forward with a new one,” he continued.

As the celebration continued to unfold, Chastain approached the pit wall, a piece of watermelon in hand.

Leaning across from the other side, taking it all in, was Bowman. He’d finished second. The Hendrick Motorsports driver, like Chastain, had experienced the trials of competing for underfunded Cup teams before getting his big break.

The two discussed their battle for the win.

“Yeah, you did,” Bowman responded. “Dude, it’s your first win, I would’ve done the same shit. I’ve been on both sides of it, congrats. Like, really proud of you.”

After 11 years and more than 289 NASCAR starts, Chastain let everyone know he had arrived in the Cup Series and in COTA’s media center.

Chastain, an eighth-generation watermelon farmer, began his journey within NASCAR to this moment on July 29, 2011 in a Truck Series race at Indianapolis Raceway Park. Driving a truck owned by Stacy Compton, an 18-year-old Chastain finished 10th.

In the 11 years since, Chastain has raced for the best, the worst and everyone in between. He’s raced start-and-park entries, served as a relief driver and even lost a top Xfinity Series ride due to a criminal investigation into a sponsor.

When did he believe that being a Cup winner was possible?

Even now, Chastain said, “it hasn’t happened yet.

“I’m a good couch racer. I believed for a long time, but Justin asked me on the frontstretch, ‘Do you believe yet?’ I would say that I still struggle with that.

“I don’t view myself as a Cup Series winning racecar driver. I just feel like I have to work to get there, and I’m not there yet. There’s so many mistakes I make. There’s mental but physical. There’s the shifting, the braking, just the feedback in practice. There’s so many ways to mess this stuff up, and I haven’t done it perfect yet.”

What’s his message for drivers who’ve been where he once was, clawing, scraping and doing everything they could to keep their dream alive?

“There is no right or wrong way to do this,” Chastain said. “You see guys every year take a different path. I’m a proponent of starting out. You race. You just race everything you can. As long as you’re at the track, you have a chance to … you just never know, right? …. You just have to keep going. … You have to buy in. …

when i saw the 1 leading and winning i thought about steve park’s win at watkins glen all those years ago for dei. trackhouse had a good day with suarez winning the first stage and looking stout. it’s good to see underdog team win against the big guys.

That is what NA$CAR wants and why they set up double file restarts, especially on GWCs. It ain’t for safety.

I don’t think Track-house is an underdog team. RFK maybe? Who has more regrets right now Jack or Brad?