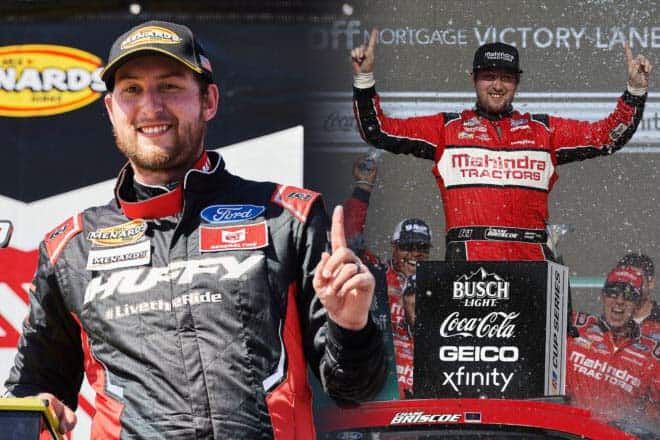 After a phenomenal restart for a green-white-checkered finish at Phoenix Raceway, Chase Briscoe outdueled Tyler Reddick and Ross Chastain en route to the win. It’s the first NASCAR Cup Series career win for Briscoe. By taking his No. 14 Stewart-Haas Racing Ford to victory lane, Briscoe became the 38th driver to win in all three national NASCAR series.

Moreover, Briscoe also became just the second driver since 1984 to win a Cup Series race as a former ARCA Menards Series champion. Given ARCA held its 1,500th race last year, that statistic is incredible given ARCA’s history combined with the amount of current Cup drivers who have competed in ARCA.

Briscoe’s first win was a magical moment for him, but does a driver’s background accurately project their future success in NASCAR?

See also
The Winners Take All

Rookie Austin Cindric won the 2022 Daytona 500 in just his second start in the prestigious race. Alex Bowman has amassed seven wins over the last four seasons, including his most recent one at Las Vegas Motor Speedway. They both have at least one ARCA win on their resumes and are headed to the Cup Series playoffs. They are just two young drivers under age 30 who have made it to the Cup Series and captured at least one trophy.

Two other up-and-comers in NASCAR are Ty Gibbs and Corey Heim. The two combined to win 16 of the 20 ARCA races last year as they dueled for the ARCA championship. Ultimately, Gibbs emerged as the champion. In addition to his title, Gibbs also won four times in a part-time NASCAR Xfinity Series slate last year en route to winning Rookie of the Year.

This year, Gibbs has already won twice and Heim won for the first time in his NASCAR Camping World Truck Series career at Atlanta Motor Speedway.

These two are poised to have promising NASCAR careers as well as a possibly great rivalry once they both move up into Cup. Will we have to wait for Gibbs to potentially win a race or a championship before we see another former champion in ARCA win in Cup?

Yesterday's Cup race was only the second event since the 1984 season (!) to be won by an ARCA series champion.

Keep in mind, Gibbs already has six victories in his brief Xfinity career. Grandson of NASCAR Hall of Fame team owner Joe Gibbs, Gibbs’ success could vault him into the No. 18 Joe Gibbs Racing Toyota in Cup. Keep in mind, its current driver Kyle Busch lacks a primary sponsor next year as his current one, Mars Inc., is departing after this season.

Harrison Burton and Todd Gilliland are the other two Cup rookies this year. Neither driver won an ARCA title, but they both have ARCA wins.

This season, Burton in particular has shown some promise before he got taken out of the Daytona 500. On episode four of  The Burton Continuum Podcast, which focused on Harrison and his cousin Jeb Burton, Harrison recalled when his father, Jeff Burton, came home and told him he wasn’t going to win the Cup Series championship in the 2006 season. That has fueled Harrison’s hunger to win a championship. He won four times in his Xfinity Series tenure, but he was unable to win a championship.

“I always wanted to do that, because my dad never could, and I think that’s the one thing he wants to do more than anything in the world is to say he’s a Cup champion – but never got there,” Harrison said.

Burton’s popular last name, along with his hard-working mentality, gives the fans a relatable driver to cheer for every Cup race. Burton has shown talent too, winning a race from 2017-2020 in ARCA and Xfinity.

Monday #NASCAR nugget. According to a source, DEX Imaging desired Harrison Burton to leave JGR for Penske this year. He initially signed for the No. 22 Penske Xfinity team, but once the No. 21 Wood Bros. car opened, Burton was elevated to become a Cup Series rookie.

The names of drivers making it to Cup have caused less and less wondering who they are as drivers have become better known coming through the lower ranks. Venturini Motorsports owner Billy Venturini pointed that out himself, referring to the Briscoe win at Pheonix.

Up until the last 5 years, The Arca schedule was kind of cherry picked by drivers but almost never would run the full season. 25 of the top 30 finishers from yesterday, have competed in Arca…. I might have even missed one

Do familiar faces and Daytona 500 wins define a superstar? Not exactly. While Cindric has a great following and is poised to have that level of stardom, someone like Briscoe may not — and that’s OK. NASCAR loves to market its drivers, and that is a massive way to promote the sport, so having drivers to be the face of the brand takes more than just winning races. Heim, Gibbs and Cindric all have the traits needed for future success, including marketability.

On the other hand, some drivers may find themselves with all the marketing and social followings without the success. Current ARCA driver Toni Breidinger may not have the on-track success as some of her competitors, but she certainly has all the makings of being a future superstar due to her massive social media followings and brand deals. Breidinger has just under two million followers on TikTok and 239 thousand followers on Instagram, which is a far higher social following than many Cup stars.

Bubba Wallace is a great example of this in the Cup Series, while only having one ARCA start to his name. He fits the type of driver who may not have many wins in NASCAR’s top division, with only one thus far (in 2021 at Talladega). Nonetheless, Wallace transcends into the mainstream, being a notable figure in the sport with tons of sponsorship backing. Breidinger is also the first Arab-American woman to compete in a NASCAR series, adding more diversity to the sport, much like Wallace being the first Black driver since Wendell Scott in 1964 to win at the Cup level.

It’s fair to say that today’s ARCA drivers have the mentality to win and move up the ranks, whereas in the past it may have been just a hobby series for retired drivers or drivers in general. Ryan Unzicker was the last driver over age 30 to win an ARCA event when he won on the dirt at the Illinois State Fairgrounds. It’s evident ARCA is mostly ruled by youth, and is also poised to become the series to watch for the superstars of tomorrow.

Did that Arca race make bubba a star in the making !

To answer the question, not as many as the old ASA! Martin, Wallace, Trickle, Kulwicki, Benson Jr… And I won’t mention the others who didn’t bother with NA$CAR.