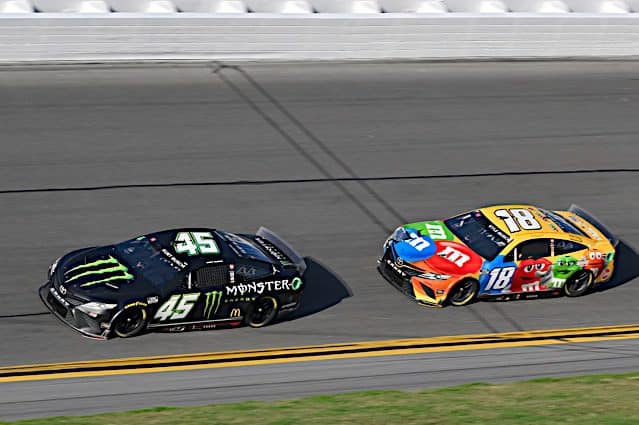 Did You Notice?… We’re already a month into the 2022 NASCAR Cup Series season? The first four races have already brought their share of unexpected surprises: two first-time winners (Austin Cindric, Chase Briscoe), a trio of overtime finishes and more spins than we’ve seen in years with the sport’s new Next Gen chassis.

The infusion of youth into the sport has been a welcome shift, beginning with Chase Elliott’s 2020 Cup championship and continuing through the success of Hendrick Motorsports last year (whose four drivers are all under age 30). The youth movement has also come to the forefront in the NASCAR Xfinity Series, where early wins by 19-year-old Ty Gibbs and 23-year-old Noah Gragson have many touting their future Cup prospects. In fact, every winner in the sport’s top three divisions thus far is under age 30; Kyle Larson, at 29, is the oldest a month into the season.

It’s easy then, with so many fresh faces, to lose sight of a few steady performances by NASCAR veterans. The quartet below is a group of veteran drivers setting themselves up for solid seasons. They’re overshadowed for now due to the new generation, but will certainly be a force to be reckoned with come playoff time.

1) Kurt Busch. From the very first race of the season, when Busch fought for the lead in his heat race out in L.A.’s Clash at the Coliseum, he’s raised the expectations level at 23XI Racing. Bubba Wallace may have the better finish of the duo, coming home second in February’s Daytona 500, but Busch has been more competitive overall.

Consider the No. 45 Toyota has a position differential of +54 this season. That includes a 13th-place finish at Auto Club Speedway two weeks ago after starting the race almost a full lap behind (Busch failed pre-race inspection three times). Busch and crew chief Billy Scott, in their second stint together, have scored stage points only once. Instead, they’ve focused on small improvements throughout the race, putting their best foot forward at the end. A fifth-place finish at Phoenix Raceway was another step forward, Busch’s best at that track since November 2016.

Sitting a comfortable 12th in the standings, a foundation has been laid here for future success. Tracks like Atlanta Motor Speedway, Circuit of the Americas and Martinsville Speedway coming up should all play into Busch’s wheelhouse and give him an early playoff cushion.

2) Aric Almirola. Chase Briscoe isn’t the only driver who’s had nine lives in his NASCAR Cup career (as I reported earlier this week on CBSSports.com). Almirola, who had his worst season at Stewart-Haas Racing in 2021, seems like a whole new man after announcing his retirement effective the end of 2022.

Following Almirola at Speedweeks, he seemed a man at peace with his decision, no longer in a position where he needed to prove himself in the face of criticism. And the No. 10 team has benefitted from an across-the-board increase in performance at SHR, one that’s seen Briscoe visit victory lane and Kevin Harvick look far more competitive than a winless 2021.

You could argue, though, that Almirola has the best all-around performance. He was in position to win the Daytona 500 before fading to fifth in NASCAR overtime. Sixth at Auto Club and Las Vegas Motor Speedway, he had three top-10 finishes in three races before a season-worst 12th at Phoenix. Sixth in points, he’s spent the entire year above the playoff cutline, which he never cracked for a single race last season until the playoffs (Almirola made it due to a shocking upset win at New Hampshire Motor Speedway last summer).

The No. 10 still needs to get out front and lead some laps (still sitting at zero in 2022). Still, if I had told you Almirola would have three top-10 finishes at this point, you would have laughed in my face, right?

3) Kyle Busch. Busch, at age 36, could be in a fight for his future with primary sponsor Mars, Incorporated (M&M’s, Skittles, etc.) leaving at the end of the season. So a strong start is important for the No. 18 Toyota, and thus far, the two-time Cup champion has delivered. He would have won Las Vegas if not for a late-race crash by Erik Jones that forced NASCAR overtime. His drive in that race from 37th to fourth, running a backup car that wasn’t even his, is easily the best run of the season to date.

Overall, Busch has three top-10 finishes in four races, sits second in points and has led 77 laps. That last number is a big one, as it’s easy to forget how much Busch has struggled the past two years in Cup. In 2021, he had just 68 laps led through the year’s first 17 races, winning just once, muscling out a late restart at Kansas Speedway.

Back in 2020? The total was just 139 through 17 races, 100 of those happening at one racetrack (Bristol Motor Speedway). With his other Toyota teammates in Cup struggling (both Christopher Bell and Denny Hamlin are outside the top 25 in points) Busch seems in the best position to break into victory lane heading to the short track portion of the schedule next month.

4) Justin Allgaier. Four races into 2021, Allgaier didn’t have a single top-10 result, crashing out of two NASCAR Xfinity Series races. This time around? His worst finish so far has been 10th. JR Motorsports has been strong across the board, with Gragson winning at Phoenix, but Allgaier has joined him with four top-10 performances in four starts. 74 laps led is third-most behind Gragson and Cole Custer, 62 of them coming at Las Vegas, a race Allgaier may have won without its own flurry of late-race yellow flags.

In his 12th full-time season in NXS, Allgaier looks in strong position to contend for the championship that’s long eluded him. The question is whether he can outrun teammates like Gragson and Josh Berry within his own organization.

Joey Logano: How many people know Logano’s the point leader? That’s an impressive start, although 19 laps led pales in comparison to others within Team Penske (Ryan Blaney has led 190). Stage bonuses and consistency has helped this team, and you have to credit Logano, the veteran at age 31, with some leadership skills as Penske hasn’t skipped a beat post-Brad Keselowski. A successful multi-week run in the FOX broadcasting booth calling Xfinity Series broadcasts has also led to higher favorability among race fans and competitors.

Trevor Bayne: Fourth and third in two Xfinity Series starts? Where did this come from? And what would have happened had Bayne not had a mid-race speeding penalty that left him fighting through the field at Phoenix? Not everyone automatically succeeds in Joe Gibbs Racing equipment (see: Ty Dillon). Give credit where credit’s due to a racing career that was left for dead.

Daniel Hemric: A 12th and a ninth during a part-time Cup schedule already? Remember, he only had two top-10 finishes during a full season running as a rookie for Richard Childress Racing. Another solid start in NXS for his new team, Kaulig Racing, has the reigning champ in that series an early favorite to take that second Cup car over full time come 2023.

If I remember right, Hamlin’s long time girlfriend put a curse on him when she dumped him. I figured Kurt Busch would do well with a new car. I look for him to get better as he learns the car more, if the team can provide him with decent cars. He’s driving a Gibbs car and should get lots better as Gibbs gets a better handle on the cars.