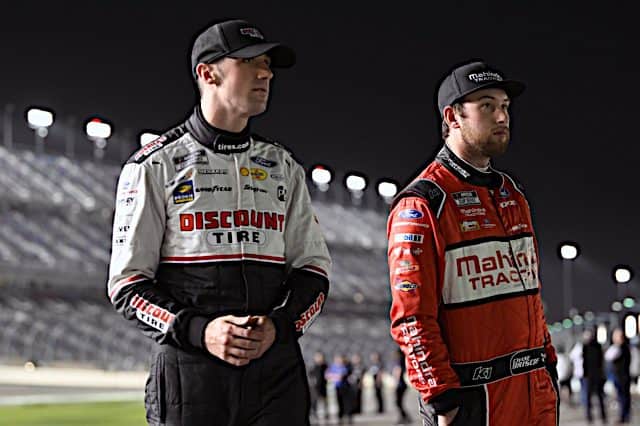 1. Sure hope no one wrote off Chase Briscoe after his rookie season

Chase Briscoe had what you could politely call a nondescript rookie NASCAR Cup Series season in 2021. In his first full-time campaign in the No. 14 Stewart-Haas Racing Ford, Briscoe recorded only three top-10 finishes — all on road courses, where he certainly looked dangerous — and finished a forgettable 23rd in points in the final standings.

It would have been easy to dismiss Briscoe this year as well, especially after even newer Ford driver Austin Cindric lit up the sport with his Daytona 500 triumph. Briscoe did finish third in that same race, but anything can happen in a superseedway race, after all, and he was right back to results like 16th at California and 35th at Las Vegas the next two weeks. Nothing to see here, right?

But Briscoe showed he’s made a second-year leap at Phoenix, where he looked fast from the start but perhaps not enough to challenge for a win. That changed as the day went on, and by the end, there he was in the lead, first holding his own with NASCAR’s top stars, and later outdueling equally hungry drivers Ross Chastain and Tyler Reddick, both also seeking their first Cup Series victories.

It’s easy to forget about young talent too early in their careers, and it’s not something that’s unique to NASCAR by any means. Across all sports in the 2020s, the news cycle seems faster and faster, and fans’ attention inevitably wanders to the next Next Big Thing as soon as possible. Hearing a football or basketball player labeled a bust after one season feels like a regular occurrence.

In stock car racing, winning usually takes time. Even someone like Chase Elliott took two and a half full-time Cup seasons before capturing this first checkered flag. If anything, Briscoe is ahead of schedule with a win in just his 40th top level start. Yet because he was so quiet as a rookie, this breakthrough feels like it came out of nowhere.

That’s far from the case, because Briscoe has shown he can win at every level. No doubt there are plenty of Briscoe fans who never questioned that a day like Phoenix would come, but this is a good lesson in patience for anyone who gave up on him or any of the other young talent reaching the Cup level. Sometimes it just takes some time to get acclimated, and as we’re seeing now, it isn’t even always that much time at all.

2. Is Chase Briscoe now the class of SHR?

Let’s go straight to the other end of the hype-doubt continuum with Briscoe: Is he, right this second, the best hope for SHR for more wins, a deep playoff run and all that good stuff?

Aric Almirola certainly seems to have shaken off whatever funk he was in for most of 2021 — perhaps the Next Gen car just really agrees with him — and has shown both speed and consistency. Consider that his 12th place finish at Phoenix was his worst of the season so far, which isn’t too shabby.

Cole Custer is, in some ways, the anti-Briscoe, as he made a big splash by winning a race in his rookie season in 2020 and hasn’t done a whole lot of note since then (but we’re not giving up on him, or we’d be hypocrites after the first section of this column). He turned in just two top-10 results in 2021 and hasn’t had one yet in 2022, though he was close with an 11th at California.

We’re forgetting someone, though … Oh yeah, Kevin “Freakin'” Harvick (shout out to Seth Rollins). Is it blasphemous to suggest that the No. 4 wheelman is anything but SHR’s top gun? Maybe a little, but while he’s shown better so far this year compared to big chunks of 2021, he’s also closing in on 50 straight races without a win. Throwing out a 30th at Daytona, Harvick’s average finish is 8.33, so he may not be contending for wins at the moment but he’s not too far off.

So it’s close between Briscoe, Almirola and Harvick, but Briscoe’s win gives him the edge right now. SHR should be pretty pleased overall, because the whole organization looks more competitive than it did a year ago.

3. Maybe NASCAR was just a few years ahead of itself with its ‘Young Guns’ promotion

If you remember the far away time of 2018, you may recall that in the leadup to the Cup Series season, NASCAR invested heavily in a “Young Guns” narrative. While it was never truly defined what was considered young, it was an understandable move after the sport lost Jeff Gordon, Tony Stewart, Carl Edwards and Dale Earnhardt Jr. in fairly quick succession. Throwing out Kyle Larson, who was already winning races, the 2018 Young Guns group could reasonably be considered to include Elliott, Ryan Blaney, Erik Jones, Daniel Suarez, Ty Dillon, William Byron and Alex Bowman.

That group combined to win zero races in the first half of the regular season, but did pick it up the rest of the way: Jones actually found victory lane first, then Elliott (who won three times) and Blaney (who pulled off a memorable ROVAL win) joined him. But as a group, they weren’t exactly giving the likes of Harvick, Kyle Busch or Martin Truex Jr. much to worry about on a regular basis.

Fast-forward four years and things have changed. Phoenix marks the 10th straight Cup Series race won by a driver under 30. Yes, Larson is responsible for half of that streak himself, and we weren’t counting him before, but even without him, we’ve seen Briscoe, Cindric, Bowman and Bubba Wallace capture victories since Denny Hamlin took home the fall Vegas trophy. No one would be shocked now if Reddick or Chastain joined them soon.

It’s not necessarily a sea change, but it’s definitely a trend, so maybe NASCAR can dust off those four-year-old Young Guns promos now.

See also
Stock Car Scoop: How Many 1st-Time Winners Will NASCAR Have in 2022?

4. The Next Gen car might not make every race more exciting

Your mileage may vary when it comes to what makes a “good” race, but after Fontana and Las Vegas appeared to benefit from the Next Gen car, Phoenix was … pretty boring, for big chunks. Restarts there remain a spectacle, and the cars divebombing across the area below the real racing area is fun, but it appeared to be harder to pass there than at the previous two tracks, which isn’t ideal for a one-mile circuit. I wouldn’t be shocked if thought pieces about whether Phoenix should host the NASCAR championship weekend started proliferating again.

The thing to remember here is that the Next Gen car was never going to make the racing better everywhere — and likely no new car could. NASCAR just races on too many different kinds of tracks to think that there would ever be a one size fits all solution to excitement, particularly in the first year of a new vehicle.

And that’s OK. There’s reason to believe the racing will be better than last year on more tracks this season, and NASCAR can tinker with things on top of that. The odds of the Next Gen car being a net plus appear to be very high, and one fairly tame race doesn’t change that.

Though plenty of fans and drivers were glum about Atlanta Motor Speedway being repaved, there’s now a very real sense of mystery about what’s going to happen this coming weekend. That’s because the track didn’t just repave, it also changed the banking and narrowed the racing surface.

Will it race like the superspeedways, despite its 1.54-mile length? That’s what NASCAR anticipates, based on the rules packages that will be in effect.

All three national series were be at their restricted Daytona/Dega horsepower levels. Cup will also have its Daytona aero package with the big spoiler. Xfinity/truck have their intermediate track aero package. https://t.co/ccrKTexhax

It’s quite possible we don’t need another superspeedway race, let alone two, since NASCAR returns to AMS in July. That said, the uncertainty seems better than the usual fate of most simple repaves, where it takes several years for the surface to return to its former glory. Here’s hoping this is a change for the better.

young guns was a promotion tied to Gillet for razor and shaving cream. there was also a movie out called “young guns”. so we can have “young guns II” now i guess.

I’m happy to read that I wasn’t the only one who wasn’t exactly on the edge of my seat for the entire race.
I spent a large part of the race trying to figure out why they’d picked this track to decide the Championship.

hmmm yeah young guns II. The gillette promotion was one that ran too long. The “young guns” from that were long in the tooth so to speak while the booth still referred to them that way.

I was glad to see Briscoe win but the race was just OK. Watched with about 1/3 of my attention on the process.

This new car seems to have really leveled the playing field.
I was against it at first but then thought back to when virtually every ASA competitor ran a Howe, Dillon, chassis. Best racing I’ve seen.

About every 9 years, there is a new batch of young guns. It’s the natural cycle.

Maybe there should be more talk about a Yung Gun.

I was being sarcastic. I wasn’t like this back in my yuth.

No, you’ve mellowed out a whole lot lololol