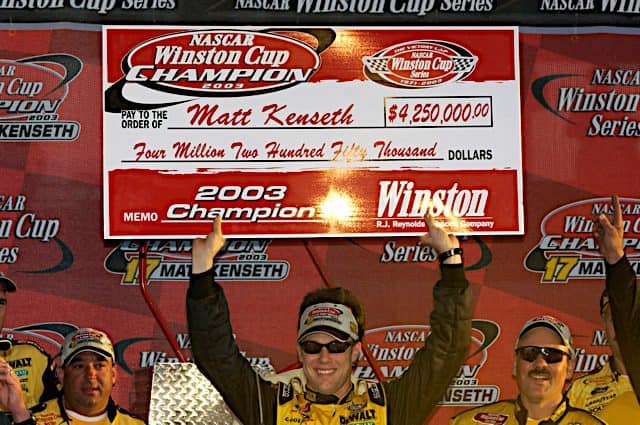 As NASCAR steamed into the modern era, ushered in by the title sponsorship of the top series by RJ Reynolds’ Winston brand in 1972, the race schedule underwent a massive overhaul, and with that, the way the sport crowned a champion also changed dramatically.

The shortened, condensed schedule effectively spelled the end of local tracks in the top series; the days of several races a week and drivers choosing races to their own advantage were over.

It still took a couple of years for the championship points system to catch up to the schedule changes.

In the 1950s, ‘60s and early ’70s, the points payout for each race was set by one of two things: the distance of the race or the total purse. In both cases, some races were worth more points than others, sometimes many times more. Drivers could choose to run the biggest races of the day in hopes of scoring more points, or they could run as many of the smaller races as they could, hoping to encounter less competition for wins and points.

Title sponsorship changed the game; it made sense to make sure the sport’s biggest stars would be on hand no matter where the series went each week.

For the first couple of years in the Winston era, the points system was a hybrid of sorts. The top-50 finishers in an event received points on a set scale (though 50 entries in a race was a rarity and fields ranged from 35-40 cars on average). But in addition to that, points were awarded by the number of laps completed, based on the length of the track. Actually, they were quarter-points on the shortest tracks; on the superspeedways where fewer laps completed the distance, laps were worth one and a quarter points each, with quarter-point increments as track length increased between the two.

In 1974, NASCAR calculated driver points using an equation that multiplied a driver’s race winnings by the number of races started and then divided that by 1,000 to determine a driver’s year-end point total. Because that’s not at all confusing.

Luckily, that went out the window the following year.

It was replaced by what’s now commonly known as the Latford system (named, handily enough, for Bob Latford, who invented it). It’s the system that many fans associate with the pre-playoff years, though it was actually used from 1975 through 2010, several years into the playoff era.

The Latford system designated equal points for every race, regardless of length or purse. It rewarded top finishes with bigger increments between positions. The winner got anywhere from 175-185 points for the feat (that number did change over the years to reward winning more). The runner-up nabbed 170 points with each spot through sixth getting five fewer points. Seventh through 11th were meted out in four-point increments. 12th and lower had a three-point gap between each position.

Bonus points were tacked on for leading at least one lap and for leading the most laps on the day at five markers for each feat, so whoever led the most laps received an additional 10 points over the award for their finish.

The Latford system rewarded consistently good finishes while the bonus points encouraged racing for the lead. The path of least resistance to the title was winning races while leading as many laps as possible, but a full-on “checkers or wreckers” mentality could be harmful. If a driver won five races but failed to finish that many or more and finished below where he maybe could have on some others because he overtaxed his equipment, his competition or his talent, he could be outraced to the championship by a driver with fewer wins who took care of his equipment and brought home top fives week in and week out.

Eventually, its emphasis on a consistently strong season over winning as many races as possible would spell the end of first the season-long points championship and then of the Latford system itself.

In its first year, 1975, the Latford system saw Richard Petty take the title on the strength of 13 wins, but he also had a series-high 21 top fives and 24 top 10s. For the next couple of decades, the champion wasn’t always the season win leader, but he was usually close, and always had multiple wins. If a driver with a high win total fell short, it was often a driver whose style didn’t always skew towards the ultra-consistent (oh, hi, Darrell Waltrip).

If fans cried foul because the champion wasn’t always the big winner, it wasn’t very loud. Until 2003.

That was the year that two things happened that ultimately rang the death knell for the season-long title race. First and foremost, Winston left the sport after more than 30 years as title sponsor. That’s the big reason for the change if we’re going to be honest here.

And then there was Matt Kenseth.

Kenseth gets a lot of blame for what came after his 2003 title run. If it seemed like Kenseth showed up in the top 10 (every. Single. Week.) whether he ran there all day or not, it’s because he did. A series-high 25 top 10s coupled with just two failures to finish and an average finish of 10.3 did more for Kenseth’s championship hopes than his win total that year, which was one.

Contrast that with Ryan Newman’s season, in which he amassed an impressive eight wins, but failed to finish seven races and averaged out at just under a 14th-place finish. Newman finished sixth in the final tally.

And suddenly, the system wasn’t any good anymore. Incoming title sponsor Nextel and the TV networks wanted something more. They wanted a champion who didn’t stroke his way through the year piling up great finishes but not wins.

Sorry, Kenseth, for being blamed for the next 20 years and possibly forever.

Starting in 2004, the Cup Series raced with the Latford system, but with a twist: only a certain number of drivers would be eligible for the title, which would be determined by a 10-race Chase that would close up any gaps (think a late-race restart but with points) to keep the field close, making a Kenseth-style runaway less of a possibility.

There were a few tweaks to the Chase format through 2010, with the basic premise staying the same, expanding from 10 drivers to 12 when someone realized they’d keep more drivers’ fans buying Chase merchandise that way.

In 2011, NASCAR ditched the Latford system for the first draft of the current point system, with just one point separating all finishing positions. The winner then received three bonus points for winning and one for leading the final lap. The driver leading the most laps got a point as well. Race wins took precedence over points for making the playoff cut

Fan reaction to the playoff format (any playoff format) has been…mixed. Many contend that titles under the Chase or playoff formats aren’t worth the same as a full-season Latford system championship. But some say that about the pre-modern era days too when drivers could cherry-pick races and often raced what was seen as “easier” fields of mostly locals to gather some points, or race fewer races and rack up the points from the big ones while skipping the more rigorous parts of the schedule.

The changes over the years do make it difficult to compare drivers across time. Some of Richard Petty’s championships were on under different rules than Dale Earnhardt’s. Earnhardt’s were won under different rules than Jimmie Johnson’s. It’s impossible to compare titles as if they were won the same way, the way many people want to (goodness knows, people still try). They simply weren’t contested in the same way.

If anyone is to blame it’s most likely the networks. We can’t know everything that happened behind the scenes but that’s my opinion.