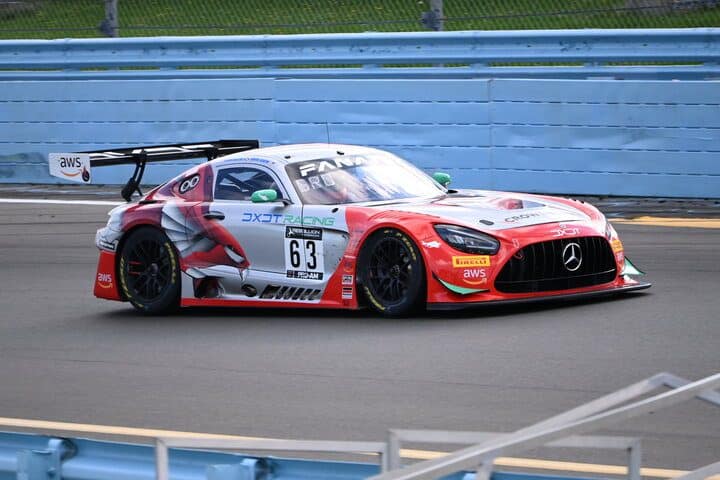 The team will continue to race Mercedes-AMG GT3s full-time.  Team owner David Askew will continue to drive the No. 63 Usalco-sponsored Mercedes.  He will be joined full-time by former Ford and BMW factory racer Dirk Mueller.  Mueller will replace Ryan Dalziel (pictured above), who is signed to drive a Ferrari for Triarsi Competizione.

“I’m really looking forward to this season,” Askew stated in a press release.  “It seems a long time since we last raced at the [Indianapolis] 8 Hour, but we’ve been busy ever since.  DXDT continues to grow and evolve, and I spend more and more of my time working on the team.  People are any team’s greatest asset, and I really enjoy the team-building part.  It’s been extremely challenging for me being new and coming into the sport without a big Rolodex, but I keep chipping away at it.  Slowly but surely, we are building a great team!”

Mueller competed in the Rolex 24 at Daytona last month with WeatherTech Racing alongside Patrick Assenmuller and Austin Cindric, where he finished fifth.  It was his first IMSA start since 2019, when the factory Ford GT program came to an end.  Mueller was one of the drivers signed to the program when it was publicly announced at Homestead-Miami Speedway during Ford Championship Weekend in 2015.  In 44 IMSA starts in the Ford, Mueller had five victories, 14 podium finishes and a best finish of third in GT Le Mans points.  Mueller also won the GTE-Pro class in the 2016 24 Hours of Le Mans alongside Sebastien Bourdais and Joey Hand.

The second car will sport the No. 08 and will be shared by Scott Smithson and Bryan Sellers.  Sponsorship will be provided by Qelo Capital.  As this is effectively the No. 19 Mercedes from last year, Sellers and Smithson will be replacing Michael Cooper and Erin Vogel.  Both drivers are moving to RealTime Racing to drive an Acura NSX GT3 Evo22.

For Smithson, he will be making his GT3 debut.  He previously drove for the team in 2020 in TC America’s TCR class in a Honda Civic Type-R TCR.  Smithson had three victories and finished third in points.  This came despite missing the Sonoma weekend in full.  At the end of the season, he was taken out in a big crash in the first race at Indianapolis that ended his weekend early.

Last season, Smithson drove a part-time schedule in IMSA Michelin Pilot Challenge for Atlanta Speedwerks alongside Ryan Eversley in a similar Civic Type-R in the TCR class.  In four races, Smithson’s best finish was a third at Mid-Ohio.

“Looking ahead to the 2022 race season, I’m excited to get back with DXDT Racing after running with the team in 2020 in a TCR car,” Smithson stated.  “Last year, I ran a TCR car again in IMSA and I’m looking forward to moving into GT3 racing now. I’m really excited to be back with the team. The way they operate is like a family, which is a lot more enjoyable for me. I’m looking forward to hopefully going for a championship.

Sellers will be racing for DXDT Racing in addition to his regular role in the IMSA WeatherTech SportsCar Championship with Paul Miller Racing, where he has spent the last six seasons.  In 61 starts with the team, Sellers has six victories and 26 podiums.  He also won the GT Daytona class championship in 2018 with Madison Snow and finished second in class last year.  The team had to miss the Rolex 24 at Daytona due to not being able to get their new BMW M4 GT3 in time.  It has since arrived and will debut at Sebring.

In addition to the full-time Fanatec GT World Challenge America Powered by AWS schedule, DXDT Racing will have both cars in action in St. Petersburg, Fla. for the first GT America Powered by AWS weekend of the season.  Those races are scheduled to be held Feb. 25-26 on the 1.8-mile street circuit on the undercard of the NTT IndyCar Series season opener.  Askew will drive the No. 63, while Smithson will drive the No. 08.