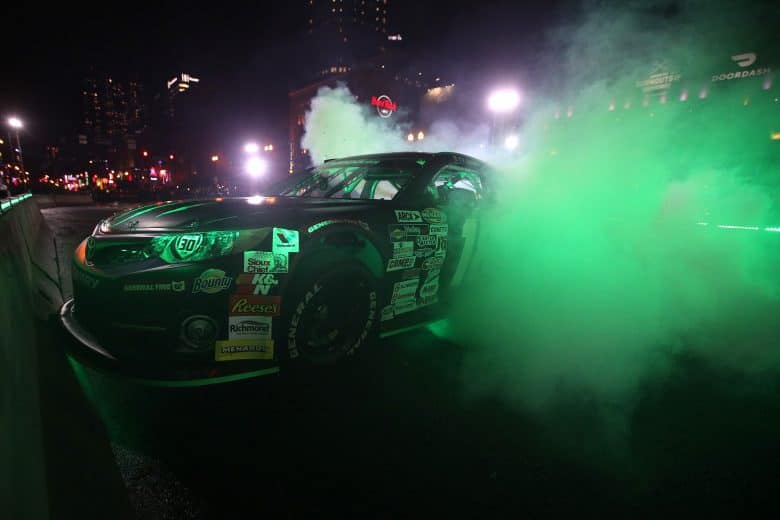 Almost four months later, on Feb. 19, the 2022 ARCA season will begin with the Lucas Oil 200 at Daytona International Speedway. The 20-race season will be contested for nearly eight months culminating with the season finale at ARCA’s home track, Toledo Speedway.

Ahead of the season, four ARCA media member experts, including two from Frontstretch, have shared their predictions on a champion, driver(s) to watch, and other hot topics.

Of the drivers running full-time, who is your championship pick and who is most intriguing to you? Why?

Garth Allan, Racing News Now: My championship pick is Daniel Dye. He showed so much speed last year in the No. 21 car, including his win at Berlin Raceway where he beat Gibbs heads up. I think he’ll be very tough to beat this year. As for the most intriguing, I think I have to go with Rajah Caruth. He’s still a relative unknown at this point. But I’ve seen some impressive speed out of him in 2021 and with Rev Racing now having Chevrolet support, I’m interested to see what Caruth will do with the better equipment.

Casey Campbell: I think the most intriguing is Amber Balcaen, because she is so unknown to the series and to race fans. It’s definitely going to be interesting for sure to see how she does in Rette Jones equipment. As for my championship pick, I think I will go with Caruth. He had some impressive runs toward the end of the season last year and I think his crew chief Brad Parrott is going to make him a better driver than he already is.

Dalton Hopkins: It would be too safe to pick a Venturini Motorsports driver. Ever since last year’s race at Berlin, I’ve been paying close attention to Dye. It was an up-and-down part-time year for the Floridian in 2021, going as far as winning and then finishing as low as 13th, but it’s a new year and a new focus. I expect him to give everybody a turn of their heads, especially on the short tracks.

Mark Kristl: My championship pick is Nick Sanchez. Of the full-time drivers, he is the most successful including winning last season’s finale at Kansas Speedway. With Chevrolet’s support and a teammate, he will be hoisting the championship trophy at Toledo. As for most intriguing, it is Balcaen. She is an unknown in many aspects. Yet she is driving for Rette Jones Racing, which won the ARCA Menards Series East 2020 race at New Smyrna Speedway as well as guided Landen Lewis to win the ARCA race at DuQuoin State Fairgrounds.

The 2022 schedule features one track change. What race are you looking forward to the most and why?

Allan: The race I look forward to the most every year (except 2021, unfortunately) is Lucas Oil Indianapolis Raceway Park. I may be a little biased because it’s my home track, but it’s my favorite track as well. It has always been my favorite since I was a kid and my family would go to the NASCAR Xfinity Series and Camping World Truck Series races every year. There’s just something about IRP that makes for great short track racing. I’m so happy that it has returned to the schedule.

Hopkins: It’s refreshing to see ARCA take increasingly more interest with short tracks each year, so the inclusion of IRP in the 2022 season excited me immediately. With ARCA and the Truck Series giving the track love in 2022, NASCAR appears to be slowly opening the door to allow its bigger series to return to the short track. The Cup Series will be a tough sell, but if ARCA and the trucks put on a good show, maybe we’ll see the Xfinity Series return in the near future.

Kristl: The IRP race will be exciting and it is the same day as the Truck race there. Hopefully, a few drivers run double-duty that day.

Allan: The East series shouldn’t have three combo races in a seven-race schedule. And what’s worse is their championship race is a combo race. Why would you want your champion, who will probably barely run top five, if that, in a field with national ARCA teams, to be overshadowed like that on what is the biggest day of their career to this point? It’s race No. 18 of 20 for the national ARCA series, so we’re well into the championship battle for them at that point as well. Nobody is paying attention to the championship battle for the lower series that’s happening in eighth position on the track. And that’s just not fair to those drivers.

Campbell: I understand why it is right now because of COVID-19, but I feel like the East schedule should be at least 10 races.

Hopkins: It’s time for the short tracks to take precedence over the bigger two to 2-and-a-half-mile ovals. Nine out of 20 of the circuits on the calendar are short tracks, yet only two of them will be presented live on FS1. A rivalry sparked between championship rivals Gibbs and Heim last year and much of the ARCA fan base missed it because it occurred at Berlin where it was only available on MAVTV. ARCA can’t shine when the majority of the field is spread out and being led by one driver for 100 laps at tracks like Michigan International Speedway or Kansas Speedway.

Kristl: The winningest driver this season will not be the champion. With Venturini fielding three to four cars each race with only one full-time driver, Taylor Gray competing part-time, Joe Gibbs Racing likely splitting its entry between two drivers, and competitive full-time drivers, the champion will instead be the most consistent, not the one with the most wins.

Last year the storyline became car counts and aggressive driving. What is a storyline for this year?

Allan: I think the storyline will be the ARCA Menards Series West continuing to grow and possibly even overshadowing the national ARCA series. The West showed tremendous growth in 2021. Great car counts, great racing, and a great championship battle that literally came down to the last lap at Phoenix Raceway. I really don’t know how the West season could’ve been any better. I think we’ll continue to see that this season, maybe even to the point where the West starts to get more attention than the main ARCA series.

Campbell: I think we are going to be talking about more winners in 2022 as well as a competitive championship battle heading to the final race at Toledo. I also think car counts will be something that will be talked about this season.

Hopkins: Another tight championship battle is brewing. Last year, we saw Gibbs and Heim in a close and heated battle for the championship. Sadly, it fizzled out near the end, and Gibbs saw himself pull away from the Venturini driver and secure his championship by the end. However, it’s highly likely Gibbs will race for his JGR in the Xfinity Series leaving a power vacuum at the top of ARCA. With so much talent in this year’s roster, the question is, who will fill it?

Kristl: It is the car counts. Last year was disappointing with only two full-time drivers who dominated the season. I expect car counts and the competition level will be better this year, and ARCA needs that.

There should finally be some competition in ARCA this year, now that the Joe Gibbs “Cup Team” of Ty Gibbs has moved on to ruin the NASCAR Xfinity Series for 2022.

Kyle Busch Motorsports bought the Gibbs team and all the staff and cars are now under the KBM banner, (using JGR’s points & # as well i may add) so effectively KBM is the Gibbs team from last seasom

#27 will win several races this year!

nah, he will be lapped by the #03 car in every race not a plate track this year. Unless they put Alex back in the car.

aren’t you the same Don Leipold who been sending Alex harassing messages on Twitter and Facebook? Or am I thinking of someone else. Apologies if I am mistaken.