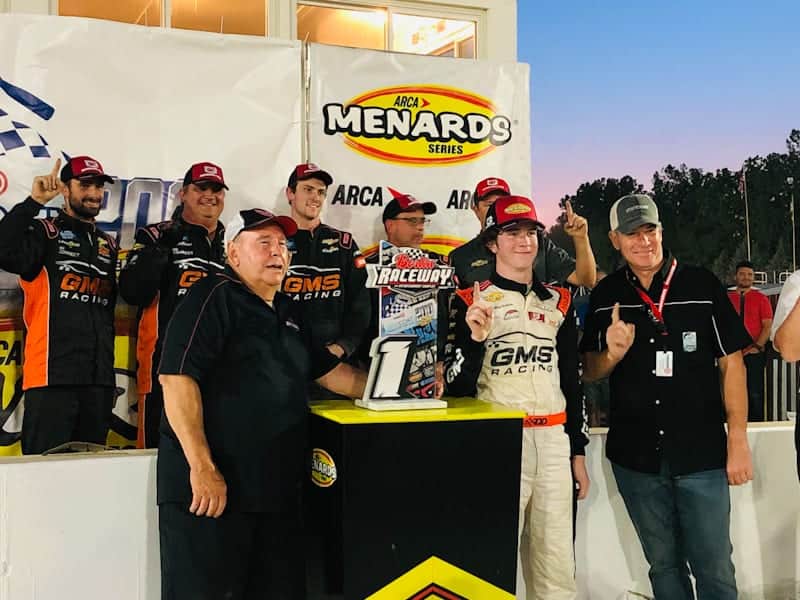 Dye led 198 of 200 laps from start to finish in just his second ARCA Menards Series start, holding off runs from Ty Gibbs on restarts and in the closing laps. The No. 21 GMS Racing driver became just the third winner of the season, with Gibbs winning five races and Corey Heim winning four.

“Ty got into me there, I thought it was over,” Dye told the broadcast after the race. “I don’t know, I don’t have words right now, this is crazy. Beating Ty Gibbs and Corey Heim and we led every lap, I’m worn out. It’s unreal, it’s so cool.

“Chad (Bryant, crew chief) just told me to think of it as a quarter midget race and I won a lot of those things, so he calmed me down, he kept me focused. I just kept doing the same thing every lap. It don’t feel real quite yet, this is a dream come true.”

Heim entered the Zinsser SmartCoat 200 with back-to-back main ARCA series victories, but his quest for a third straight ended with a third-place finish.

“Throughout practice, we needed to figure it out a little bit quicker,” Heim told Frontstretch post-race. We were going the wrong way in practice which was my fault cause I was saying the wrong feedback in practice. The bottom line is I need to get better there.”

Before Dye won this race, Heim was the most recent main ARCA series first-time winner with his victory in the 2020 season finale at Kansas Speedway. Selfishly, he wanted to win, but he remarked, “It’s cool to see him win though I want to win. Being in victory lane is really good for him, I think he’s a good kid.”

Next up on the schedule is a race next Saturday (July 24) at Iowa Speedway. Heim continues to lead the points and is optimistic about his chances at Iowa. He finished sixth there in 2019.

“I like Iowa,” Heim said. “It’s a good multi-groove race track, a driver’s track in that aspect. Looking forward to that; I haven’t been there in a couple of years. I was good there last time so I’m looking forward to it.”

Taylor Gray crossed the finish line in fourth in his second race since he returned from an off-the-track injury.

“We should have been running second,” Gray told Frontstretch post-race. “We’re making progress up there. As a team, we’re building our notebook as the races go on so we just have to stay consistent and we’ll do better in the race. Tonight, we really struggled to get the car rotated through the center in the latter part of the race. I definitely feel like the No. 18 [Gibbs], the No. 21 [Dye] was in his own league. I think we were better than the No. 20 [Heim] under the right circumstances, but we’ll take it and go on to Iowa Speedway.

“We missed a little bit this weekend,” Love told Frontstretch post-race. “It’s hard to say where; we just weren’t where we wanted to be. I know we’re trying some stuff and we were really good at Elko. This weekend we tried some things that didn’t quite work. I gotta trust my guys and know we’ll be better at the next one. Just got to back and look where we can better.”

“Obviously we got a great shot,” he said assessing his chances of winning the next race at Iowa. “We just have to control everything we have to control, go there, execute. I got to go there do well, my guys will do well. Iowa has been a good track for them [his team Venturini Motorsports].

A few cautions for some spins came out throughout the 200-lap event on the 7/16-mile racetrack.

Dye had to make an evasive maneuver on lap 34 to avoid Morgan Alexander’s spun No. 50.

The caution came out and Thad Moffitt came down pit road for some adjustments.

Dye maintained first place on the restart around lap 40 ahead of Gibbs and Gray.

Nick Sanchez was aggressive as he worked his way through the field, making contact with Love while battling for fifth shortly before the first break. During this break, Sanchez’s team worked to repair some slight damage that incurred when he was pinched under a lapped car.

On the following restart, Dye again shot out the lead but Gibbs tried to get under him to battle for first. The No. 18 made contact with the No. 21 GMS Racing car, which made Dye a bit squirrelly. Dye gathered it up, though, and stayed out in front.

Teams pitted once again during the second scheduled break in hopes to make adjustments needed to catch Dye in the final 75 laps.

The field restarted on lap 130 but wouldn’t stay green at first. Gracie Trotter battled below Sanchez, and as she moved down in a turn, Moffitt snuck in his car below her No. 25, which sent her around.

The caution period was brief and Dye held off the No. 18 on the next restart. The rest of the race stayed green as Dye continued to tick off lap after lap.

But in the closing laps, the 17-year-old felt some pressure from Gibbs for the lead. The surge from the No. 18 wasn’t strong enough and Dye took home his first checkered flag of his ARCA Menards Series career.

The series takes on Iowa Speedway next Saturday, July 24. The Shore Lunch 150 airs at 9 p.m. ET on MAVTV and NBC Sports Gold TrackPass.

Mark Kristl contributed to this article.