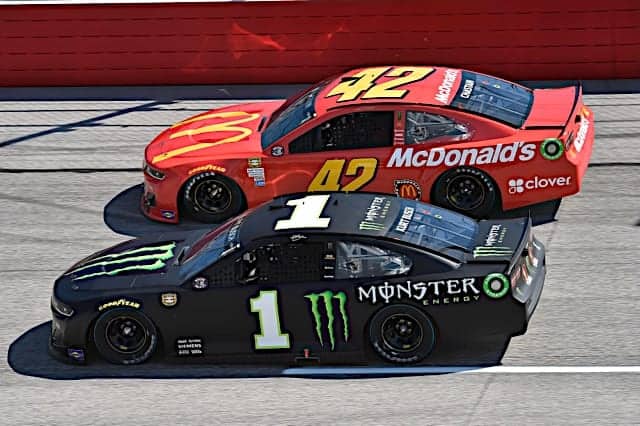 On the biggest stages of American motorsports, Chip Ganassi has found major success, from open wheel to sports cars to stock cars.

But in a bombshell that rattled the NASCAR world in a 2021 that was already tumultuous in its own right, the chapter of Chip Ganassi Racing and NASCAR was slammed shut.

On June 30, it was announced that the upstart Trackhouse Racing Team, co-owned by Justin Marks and Pitbull, would acquire both charters and all NASCAR equipment of CGR as of the end of the 2020 NASCAR season.

Thus ended the NASCAR foray of a race team that, while successful in the top level of the sort, never tasted the same success as seen in other ranks of motorsports it’s entered.

In total, Ganassi drivers have won a combined 19 titles in the Champ Car World Series, the NTT IndyCar Series and WeatherTech Sports Car Championship, but none, however, in NASCAR.

“It is humbling to know we have secured our position in NASCAR for the next decade,” Marks said when the transaction was announced. “These are never decisions made without a lot of thorough consideration and deep reflection by both parties,”

But don’t think of Ganassi as someone who was looking for a way out of NASCAR. In actuality, Marks had a desire to move Trackhouse forward, and, to paraphrase the famous line from The Godfather, made an offer that Ganassi couldn’t refuse.

“I can honestly say that my NASCAR team was not for sale,” Ganassi said then. “Justin simply came to me with a great offer and an even better vision. As everyone knows, I care deeply for my employees so selling to someone like Justin, who is part of the CGR family, made the reality of selling much easier. He knows our organization and the people. That gives me comfort.”

Ganassi, who has seen his drivers win open wheel’s crown jewel event, the Indianapolis 500, four times, was not without his success in NASCAR’s greatest cathedrals. In 2010, Jamie McMurray stormed to three NASCAR Cup Series wins – one in the Daytona 500 and another in the Brickyard 400. For a team whose history holds winning at the hallowed yard of bricks in such high regard, it’s hard to rate a season as being much higher.

The challenge for Ganassi over time, however, was being able to go door to door with the elite NASCAR owners. Just three times did CGR drivers combine to win more than two races in a season. That came with Kyle Larson’s four-victory 2017, McMurray in 2010 and then in 2002, when Sterling Marlin won twice, saw his season and title hopes end due to injury before being replaced by McMurray, who won that fall’s race at Charlotte Motor Speedway. It not only supercharged McMurray’s path to stardom, but it also quenched probably the best title chance for Ganassi in NASCAR. As good as Larson was in 2017, he slumped to an eighth-place points finish.

In what ended up being the final season for Ganassi in NASCAR, Kurt Busch and Ross Chastain took the reigns, and Busch snagged a spot in the playoffs by winning at Atlanta Motor Speedway in July.

By the time of Busch’s win, it was a farewell lap for CGR and NASCAR, as on June 30 it became official that Trackhouse would acquire Ganassi’s NASCAR operation.

In a time when longtime owners like Joe Gibbs, Jack Roush and Rick Hendrick are gradually siphoning off control to someone else to eventually run things full time, the sale of the team to Trackhouse was a clean break.

As a new team, Trackhouse certainly showed signs of strong potential, with Daniel Suarez getting a fresh start behind the wheel in the team’s inaugural Cup season in 2021. Just seven races in, Suarez had a very realistic chance to win on dirt at Bristol Motor Speedway. It came on the heels of a team showing that it could do a lot with less, finishing 20th or better three of the season’s first six races. That may not sound like much, but that’s impressive for a new operation.

By season’s end, Suarez was 25th in points, better than drivers from front-running teams such as Cole Custer at Stewart-Haas Racing and Ryan Newman at RFK Racing.

After a respectable path of baby steps, Trackhouse now goes into the brave new world of the Next Gen car as well as a team expansion. With an additional charter in hand, the team’s second car will be driven by Chastain, who moves over from Ganassi. Familiarity could be Chastain’s ally, as he’ll take a number of Ganassi employees to the new team with him, even if indirectly.

Trackhouse Racing has hired many former employees of Chip Ganassi Racing. @AndrejevAlex reports the team estimates that 115 of its 130 employees are from CGR. https://t.co/pboeKNn2kj

“Trackhouse is one of the most interesting organizations in the garage,” Chastain said then. “The enthusiasm they bring off the track and the program they are building on the track is exciting. Working with Daniel and Justin, however I can, is my number one priority. I know that I can help build our Chevrolets to be as strong as possible.”

Meanwhile, Ganassi will still be around racing in 2022 — just not NASCAR. And while that’s a weird thing to say after all these years, it seems like the remnants of the organization are in good hands with an up-and-comer like Trackhouse.

RIP CGR. I imagine you made a good deal of money with the sale of your team, but I truly believe, having watched your passion to win over the years and how you look out for your drivers, that you made the sale because Marks was willing (and probably bullpit, I hate rap) to hire of your employees. I do wished you’d come back to NASCAR someday, though.