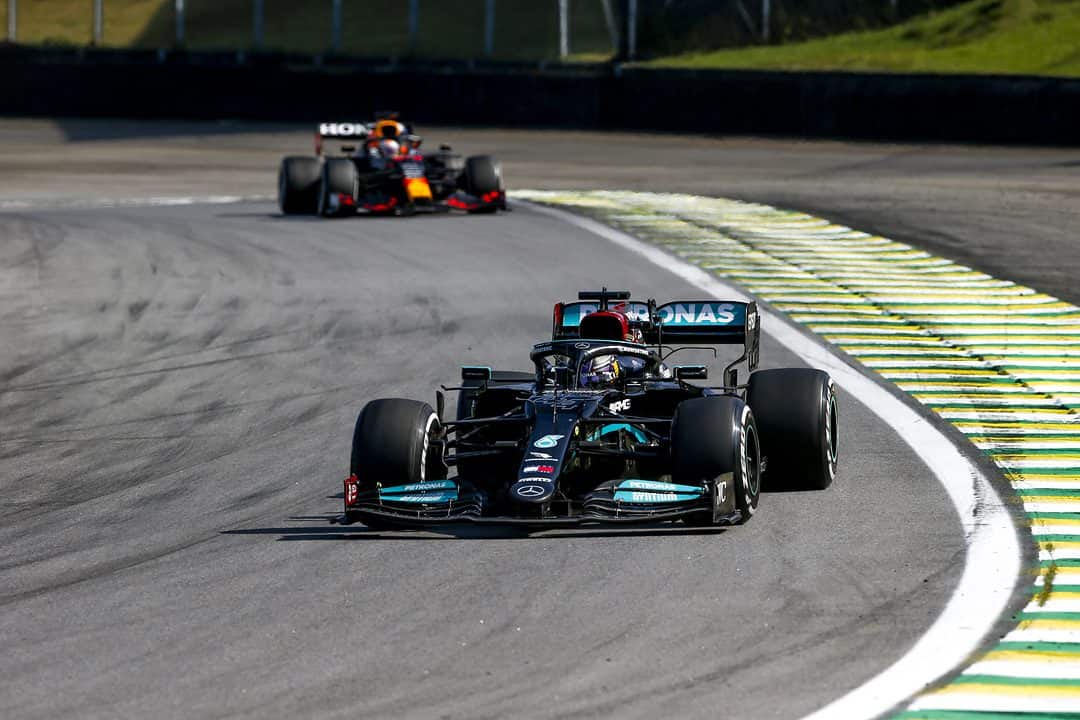 After Valtteri Bottas failed to defend from Max Verstappen off the line at the Sao Paulo Grand Prix, it was only a matter of time before Verstappen found himself confronted by the presence of Lewis Hamilton.

Hamilton pushed himself past Sergio Perez on lap 19 of the 71-lap Grand Prix and set sail in pursuit of Verstappen with brilliant pace. What ensued was a 25-plus lap pursuit which oscillated back and forth between a calm chase and moments of elevated blood pressure for the entire city of Sao Paulo.

On lap 48, Hamilton sold Verstappen a fake dive into turn 1, which left Verstappen’s run through the Senna esses compromised. Hamilton enjoyed a serving of DRS on the run to turn 1 and pulled to the outside of Verstappen, who took an aggressively defensive line.

Hamilton pulled ahead on corner entry, but Verstappen held tough on his inside line and threw his Red Bull into the corner level with Hamilton. Neither driver backed out of what looked to be an ill-fated corner.

What happened next will stir some debate up until the lights go out in Qatar. Verstappen avoided contact thanks to Hamilton having the presence of mind to take some angle out of his steering wheel, and both cars ran wide on corner exit. Verstappen managed to retain his lead and somehow neither car picked up floor damage when going over the curbs or rejoining the track.

That moment when we all held our breath on Sunday ?

The stewards immediately took note of the incident and for the moment it looked as though Verstappen would receive a time penalty for dangerous driving.

Whether Verstappen deliberately ran Hamilton off track was not immediately clear, however. Onboard footage only showed the rear-facing view from Verstappen’s car, and Hamilton’s forward-facing onboard camera did not provide a reliable view of Verstappen’s hands through the corner.

At first glance it certainly seemed that Verstappen could have made more effort to complete the corner, as he missed the apex by a margin similar to what Hamilton managed back in Silverstone.

That said, Verstappen was on the dirty side of the track, braking into a decently sharp corner. Dirty air likely wasn’t a factor, as Verstappen wasn’t meaningfully behind Hamilton when the cars began to turn in.

Regardless of what we can say in hindsight, race director Michael Masi, the most popular man on Sundays as of late, had a radio onslaught coming his way as a result of the incident.

Red Bull sporting director Jonathan Wheatley immediately greeted Masi with a stern defense of the incident. “Michael, that is all about letting them race,” Wheatley said.

Masi assured Wheatley that the stewards weren’t overly concerned with the on track encounter and closed his response with a succinct “thank you for your input.”

“Of course, man. Of course,” the defending champion said.

Hamilton’s frustration is understandable given that he was excluded from Friday’s qualifying results and left to start the Saturday sprint race from the back. The FIA and Mercedes certainly haven’t seen eye to eye this weekend.

Mercedes sporting director Ron Meadows was next in line to have a go at Masi, and he only needed twelve words to do so. “So: crowding off track, gaining an unfair advantage,” said Meadows. “And no action necessary?!”

Masi again gave his assurances that the incident had been reviewed to a thorough enough extent to reasonably deny the need for further investigation, though that won’t do much to make anyone at Mercedes feel any less wronged.

In F1, changing direction more than once is considered weaving and is generally met with a warning. True to tradition, the FIA showed Verstappen the black and white flag, warning him not to get too enthusiastic with his blocking in the future.

Verstappen was given the message over the radio in a timely manner, and clearly felt that he had bigger things to worry about at the time. Fair enough, given that Hamilton was less than a second behind. Upon hearing the news, Verstappen’s only response was “Yeah, perfect. Say hi!”

An interesting amount of frustration from a man who had just been spared an easily justifiable time penalty.

Penalty or not, Hamilton later forced his way past Verstappen and won the Sao Paulo Grand Prix by a comfortable margin. The victory leaves Hamilton only 14 points behind Verstappen in the title race with three rounds to go.

With the tension between Hamilton and Verstappen growing, it’s easy to imagine that the stewards will be working hard in the desert as F1 closes out 2021 with a three-race swing through the Middle East.