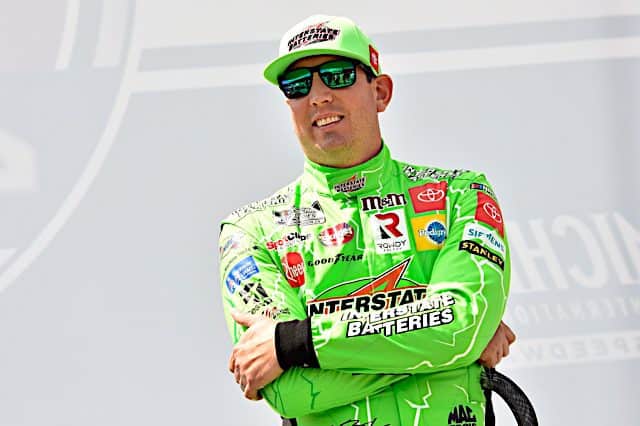 Hours before the Coke Zero Sugar 400 at Daytona International Speedway on Saturday, Aug. 28, 20 drivers of the NASCAR Cup Series stopped by the media bullpen to answer a few questions.

One by one, Cup drivers stopped by the gates and spoke about the past, present and future of their careers. There were plenty of topics to choose from and plenty of stories to talk about. From the playoffs, the 550 package and new race teams, multiple drivers stopped by to speak their minds.

It’s easily the biggest story that broke over the weekend that wasn’t related to what was going on in Daytona.

23XI Racing, the team that is co-owned by driver Denny Hamlin and NBA legend Michael Jordan, announced on Friday, Aug 27, that it would begin fielding a second car driven by Kurt Busch, starting in 2022.

Kurt Busch’s brother, Kyle Busch, added his thoughts to the addition of his older brother to the Toyota racing family.

“I don’t know what everybody was thinking. I hope they don’t pay him much,” Kyle Busch jokingly said. “He’s been around for a long time. He’s got great experience and great ability in being able to improve every race team he’s been to. Sometimes the Busch way of doing that isn’t always necessarily the best or the most PC, but we are able to get the most out of the people we’re around. I feel like that’s one of our attributes to being successful in the sport.”

“He did ask me some questions about what I thought,” Kyle Busch, the two-time Cup Series champion, said. “It’s nice to have that ability to be a shoulder to lean on and know what the relationship with the Toyota folks is about.

“One of his questions was, ‘Do you think I should do it?’ I said, ‘Well, what other choices you got?'”

Kurt Busch spoke about his new manufacturer-sharing relationship with his brother.

Ross Chastain Reflects on his Aggressiveness

Future Trackhouse Racing driver Ross Chastain has been known to be aggressive in his racing style over the years.

While it’s been the sight of controversy, it’s also turned a lot of heads and caught many an eye, and it doesn’t look like he’s going to change anytime soon.

“I’ve definitely been criticized over the years by my peers and a lot of people that watch,” Chastain said when asked about his driving style. “I’ve talked with Justin Marks. There’s a lot of things I need to get better at, and I’m working at that, but that’s one of the reasons that he wanted me to drive his race car.”

He explained how that’s what separates him from the rest.

“There are a lot of people have told me that they can’t believe that I’m the way that I am, and they’re not around anymore,” Chastain said. “Not to be arrogant, but you have to be your own person. If we all were just the same polished, perfect person, what fun would that be? That’s the way Chip (Ganassi) has been. He’s like, ‘You go race. You don’t have to worry about all this other stuff.'”

“I’ve been beat up before. More people should probably get beat up,” Chastain said with a laugh. “I don’t know. It sounds wrong when I say it aloud. But if somebody’s going to be mad at me, it’s like, okay, what’s the worst? You’re going to punch me in the face? Okay.”

Is Ford Ready for a Playoff Full of 550 Package Races?

By the sounds of it, maybe not.

“I don’t see the Fords winning anywhere legitimately other than at the Superspeedway tracks and the 750 (HP Package) tracks,” Brad Keselowski, who is taking a co-owner role at Roush Fenway Racing in 2022, said. “There’s not anything I can do about it. I’m not okay with it, but I have to play with the cards I have.”

Despite its shortcomings on 550 package tracks, Ford seems ready for the 750 events.

“I think Penske’s pretty good at the 750 tracks,” Byron said. “I’ve seen them have a lot of speed on the flat one-mile places.”

So, who’s the favorite?

The playoffs are ready to begin, which means there are 16 drivers that all have a chance at winning a NASCAR Cup Series championship. So, it was asked, who will win?

Frankly, not many seemed to have an answer.

“Honestly, I would say it’s hard to pick right now,” Almirola said. “There’s so much parity in the sport right now. It’s wide open in my opinion.”

“I’m going to have to beat 15 cars to do it, so it’s somewhere in there,” Joey Logano jokingly said. “You just don’t know. You’ve got three races (per round). You have two bad ones, your back’s against a wall.”

“I think Gibbs is always good at Darlington [Raceway],” Byron said. “So I envision them being good. I can see a couple sneaking in at Richmond [International Raceway]. It’s going to be a tough first round because there’s a lot of different players that are good on different style tracks.”

Those that did have an answer, had one of two constants – Hamlin or Kyle Larson.

“Denny (Hamlin)’s been extremely consistent,” Joe Gibbs Racing driver Christopher Bell said. “I don’t think he’s been the best car. It proves that consistency’s still there. The veterans are still the favorites for sure.”

“In my opinion, the No. 5 has been the best all year,” Alex Bowman said about his Hendrick Motorsports teammate Larson. “I don’t want to call myself the title favorite. If I can pick a guy that was the strongest over the course of the year, it would be the No. 5.”

“It’s so hard to say,” regular season championship runner-up Hamlin said. “Obviously, Larson’s consistent every week like we are. There’s a few others, but I think the No. 11 and No. 5 are up front every week. I don’t know, it’s wide open.”

The Career Year of Alex Bowman

It’s no secret that 2021 has been the year of the bowtie – or more specifically, the bowties of Hendrick Motorsports.

With 11 total wins in 26 races, and all four teams qualifying for the playoffs for the first time since 2014, HMS has been the team to beat in 2021.

One of those drivers getting recognition is the driver of the No. 48, Bowman, who has had a career year in 2021. Before this season, the Arizona-native had only two career Cup Series wins — both in separate years. This year, the 28-year-old has earned three wins to his name, which is the most he’s had in any NASCAR season.

Despite that, Bowman downplays his accomplishments.

“I think everybody knows I’m not a guy that’s going to puff my chest out and walk around,” Bowman said. “But I’m definitely proud of those three wins this year. Getting Ally in the playoffs, getting their first points wins, but you know, aside from that, it’s just business as usual.”

Parity, not parody. I usually could care less about spelling errors that others make, but this one was staring at me. Probably an autocorrect issue but still…

Parody: an imitation of the style of a particular writer, artist, or genre with deliberate exaggeration for comic effect.
“the movie is a parody of the horror genre”

Since NA$CAR is a parody of actual stock car racing, parody works too.

Great one, best answer in a long time. Fits perfectly.

I imagine the “Final 4” will be two Hendricks Chevies, one Toyota, and one Ford. Gotta keep PARITY so the manufacturers remain happy in this playoff PARODY. NA$CAR can’t exclude anyone or they may take their money and leave.

If I had to guess, I think it will be;

Larson and (toss up between Bowman / Elliott. Probably Bowman)
Hamlin for Toyota.
Logano for Ford.